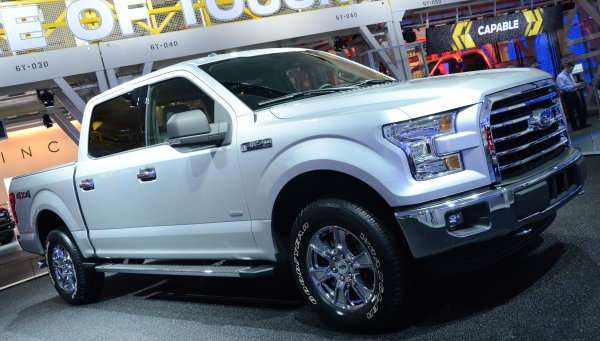 Neither Ford Motor Company nor the EPA have announced the official fuel economy numbers for the 2015 F150, but the folks at Motor Trend have announced their numbers from the first round of testing with the 2.7L EcoBoost and surprisingly, this new engine falls well short of the Ram 1500 EcoDiesel.
Advertisement

The 2015 Ford F150 is expected to revolutionize the half ton truck segment with a new, lightweight aluminum body that should make this new F150 better than the outgoing model in every way. While things like towing, hauling and overall performance are key metrics for the segment, there is also a heated battle being waged for the title of the most fuel friendly half ton truck on the market. Right now, the Ram 1500 EcoDiesel holds that title with EPA figures of 20mpg around town, 28mpg on the highway and 23mpg combined in rear wheel drive form, while four wheel drive EcoDiesel Ram trucks drop to 19 in the city, 27 on the highway and 22 combined.

Those EcoDiesel Ram numbers are the current benchmark for the half ton truck segment and many expect that the 2015 Ford F150 will be the truck to unseat the Ram as the segment’s most efficient pickup. However, the first published fuel economy figures for the new 2015 Ford F150 with the 2.7L EcoBoost V6 fall far short of surpassing Ram’s powerful little diesel engine.

Motor Trend’s Real MPG for the 2015 F150
There are no official fuel economy numbers from Ford Motor Company or the EPA for the 2015 F150 pickup, but the folks at Motor Trend got ahold of a next gen F150 with the brand new 2.7L EcoBoost V6 and four wheel drive. MT put this truck through their 88 mile long “Real MPG” testing process and ended up with some surprising figures. The 2.7L EcoBoost engine in the 4WD 2015 F150 returned numbers of 16.6 miles per gallon around town, 21.5mpg on the highway and a combined number of 18.5mpg.

Those are well below the EPA figures for the Ram 1500 EcoDiesel, but Motor Trend has also put the diesel half ton Ram with four wheel drive through the 88 mile Real MPG test and saw figures of 18.6 miles per gallon around town, 25.8 on the highway and 21.2mpg combined. Based on the uniform testing process, Motor Trend found the Ram to beat the new EcoBoost F150 by 2 miles per gallon better around town, 4.3mpg on the highway and 2.7mpg combined.

Now, it should be noted that according to the EPA website, the most efficient 2014 Ford F150 4WD model was powered by the naturally aspirated base model 3.7L V6, which returned 16 around town, 21 on the highway and 18 combined – very similar numbers to Motor Trend’s Real MPG figures for the new 2.7L EcoBoost V6. The new base model V6 could be more fuel friendly than the 2.7L EcoBoost, but that base engine won’t offer the power or capabilities than you get with the EcoBoost or the Ram EcoDiesel and base on what we have seen in the past, I would be surprised to see the base V6 being more fuel friendly than the 2.7L EcoBoost.

If these Real MPG numbers do prove to be close to the official fuel economy numbers, the 2015 F150 is going to be significantly behind the Ram and if that is the case – Ford had better hurry up with that new 10-speed transmission.