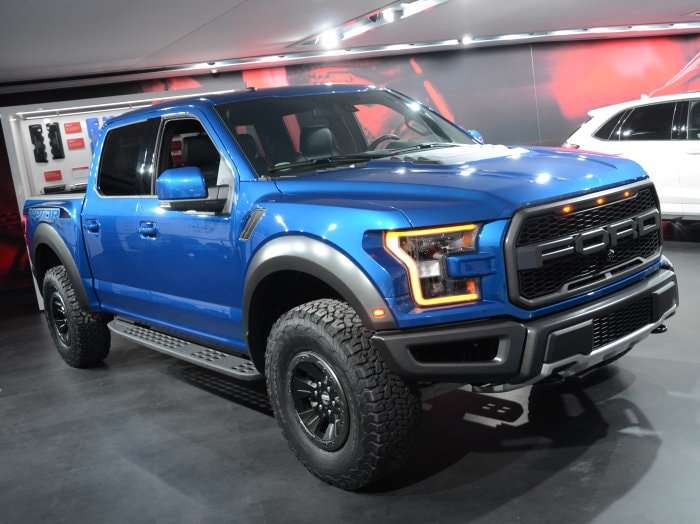 The new Ford F-150 Raptor has proven to be incredibly popular with new-truck-shoppers, so it comes as little surprise that the Motor Company has once again increased the base pricing for the 450-horsepower off-road beast.
Advertisement

The Ford F-150 Raptor is currently unrivaled as the most off-road-capable truck sold in America. In fact, it is likely the most capable truck in the world when it comes to handling rough terrain at high speeds, and as has been the case since the Raptor was introduced years ago – the high performance half-ton has been popular since it went on sale. When the current Raptor began hitting dealerships, there was a backlog of orders and plenty of dealer markups as buyers scrambled to get into the 450-horsepower pickup.

As is generally the case with popular, high priced models like the Raptor, the Motor Company has gradually increased pricing and according to CarsDirect, the most recent price hike adds $660 to the bottom line of all 2018 Raptors sold going forward.

An Immaterial Increase
While some people will grumble about the always-rising price of modern trucks, the fact of that matter is that an increase of $660 won’t stop anyone from buying a 2018 Raptor if they had already planned to do so. When we are talking about a truck that starts around $52k and quickly climbs into the mid-60s, $660 – or slightly more than 1% - is immaterial. Even the thousand dollar increase over the course of the last year likely hasn’t changed the mind of any buyers who wanted a Raptor and that is why price hikes like this happen.

Even with the higher prices, it is a safe bet that the 450-horsepower F-150 Raptor will keep on selling like hotcakes. The people who are always whining about the price of new vehicles will use this as their latest reason to rage, but for the people who buy vehicles like this - the price hike doesn't matter.

Tom wrote on June 13, 2018 - 11:19pm Permalink
STOP crowning the Raptor some engineering achievement. It is a lifted truck... there are plenty of vehicles that are more capable that the raptor. Anyone can buy and install all of the raptor parts on their own truck. Since when is a lifted truck some kind of an achievement? put $10000 to $15000 worth of off road upgrades on any 4x4 truck and it will easily keep up with( probably beat) a Raptor and You get to choose all the parts and really create a custom truck. The Raptor has only a single stage coil-over on the front. A stage 2 coil-over(like KING) kit with lift is $4000, $ 4000 in rims/tires $4000 in light bars, winches,rock protection etc. etc. and the Raptor is finished. I was following a Raptor today... the back end of that truck is not stable at HIGH speeds, I was pushing him from behind going around 60. His truck was totally drifting around, the back end just would not track straight. The Raptor is the most over rated over priced truck on this planet!! OH and I off-road a lot and have never even seen a Raptor on the dirt. Guys buy Raptors just to say they own a Raptor most of them never see the dirt. Car and Driver took the Raptor,The Power Wagon and ZR2 . put the three against each other and the Raptor was last. Why? on hard packed gravel and dirt roads the back end of the Raptor kept stepping out at 50- 55 MPH and the truck would spin out completely sideways. Neither The Power wagon or the ZR2 had this problem on the dirt and were able to achieve higher more stable speeds than the Raptor . Ford and Toyota put their rear shocks right on top of the leaf spring, straight up to the frame. Dodge , GM Jeep still use the old school shock set-up( the rear shocks are mounted with an angle to frame) The old school is better for off- roading( look at a jeep ), the other is for increasing payload capacity that is why Ford/Toyota switched more payload numbers. The Toyota/Ford design transfers every single bump straight up to the frame, causing lots of vibrations from the road( like washboarded dirt roads) to be transferred straight to the frame. The back of the Raptor just shakes too much and then it spins out!! THE POWER WAGON and ZR2 are both better at high speeds off road than the Raptor. Probably Cheaper too!
Tom wrote on June 14, 2018 - 12:00am Permalink
Stop acting like the Raptor is the be all end all!!! Lifted 4x4 trucks have been in this country my whole life (49 years) The Raptor is nothing new, the list of 4x4's is a mile long from Jeeps to Land Cruisers , Hummers to Land Rovers,Blazers n Broncos, not to mention the endless lifted Ram's, Ford's, Chevy's/GMC, Toyota Tacoma/Tundra's Trucks many of these vehicles just has capable some even more than the Raptor. Just get so tired of hearing about the Raptor, the HYPE is better than the truck!!! A lifted truck is not a new idea stop acting like it is the best thing since sliced bread. Most Raptors won't even see the dirt.
Tom wrote on June 14, 2018 - 11:56am Permalink
If the Raptor is so good why are there so many stage 2 coiler-over up grade kits made for the Raptor? Check Google there are lots of suspension kits made for the Raptor!!! So pay a premium price for the truck, rip out the current fox suspension and up grade to a long travel stage 2 coil-over?!?, OR buy a 4x4 f-150(saving 15K or more) and put the stage 2 lift on that!!