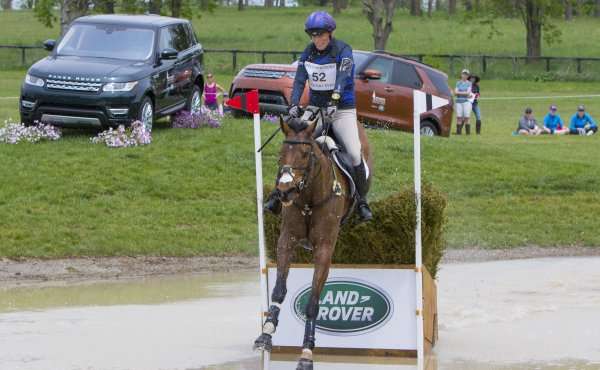 I was fortunate enough to attend the 2017 Rolex Kentucky 3-Day Event presented by Land Rover this past weekend, giving me a chance to see how the British automaker uses one of the most important events in the equestrian world to create an incredible piece of non-traditional advertising.
Advertisement

The Rolex Kentucky 3-Day Event presented by Land Rover is one of the biggest annual competitions in the equestrian world, with horse and rider teams traveling from all around the globe to the Kentucky Horse Park in Lexington. Similarly to the Olympic format, the Rolex 3-Day includes three different riding disciplines – dressage, cross country and show jumping – and the athletes in attendance (both human and equine) are truly the best in the sport.

Those riders who compete in the Rolex 3-Day Event are at the pinnacle of the sport and the Kentucky event is the show which every young rider dreams of someday competing in – which leads to this event being the most popular non-racing equestrian event in terms of spectators each year. Tens and thousands of dressage, cross country and show jumping fans flock to Lexington for this event and while I have never previously attended the Rolex 3-Day, I am very familiar with the event. My wife and I are active in the equestrian world and I am a fan of this type of competition, often watching this event and others like it on television. Knowing that I am active in the equestrian world, the folks at Land Rover were kind enough to invite me to Lexington to attend the Rolex Kentucky 3-Day event to see how the automaker uses the most important horse show in America to introduce prospective buyers to the Land Rover brand.

Land Rover on Display at the Rolex 3-Day Event
In this day and age, we are so bombarded with advertisements in the traditional forms, including television, radio, print and internet advertisements that as consumers, we slowly learn to ignore the marketing messages. This called being “ad blind” and this rejection of long-favored forms of advertising has led companies in every industry to find new ways to bring information of their products to their target audience. This is called non-traditional advertising and with the Rolex Kentucky 3-Day Event, Land Rover does a remarkable job of introducing their vehicles and their brand name to a massive group of prospective buyers. When spectators first enter the grounds of the Kentucky Horse Park and head towards the Rolex Arena where the dressage and show jumping competitions take place, they all walk past a large lake with a new Land Rover Discovery floating around in the middle of it. There are also Land Rover logos on the fencing leading into the main body of the venue (and elsewhere throughout the venue). There are a few Land Rover vehicles in the arena during the dressage and show jumping portions of the Rolex 3-Day, as well as a few more vehicles parked around the water jumps of the 18th obstacle of the cross country course.

Between the body of the cross country course and the large arena at the Kentucky Horse Park is the Land Rover off-road course. This is an intricate off-road course where event attendees (of legal age) can sign up to drive a handful of different Land Rover and Range Rover vehicles in serious conditions – including mud and deep water.(More on the next page) All the spectators had to do was sign up and they got to make a lap of the off-road course with driving assistance of a trained Land Rover off-roading expert. Also, when you signed up to drive a Land Rover in the mud, you got a green Land Rover hat. Next, Land Rover had their “ultimate stable” display next to the arena, in which spectators could get up close and personal with the new Discovery, score a free cookie and a Rolex event logo-stamped horse shoe and admire some horse show-related items from some of the top brands in the industry. The ultimate stable also played host to Zara Tindall for an autograph session. Finally, a great many of the spectators who come to the Rolex Kentucky 3-Day Event bring their dogs and in the event that you need someone to watch your dog for a few minutes – Land Rover had you covered. At two different locations at the Kentucky Horse Park, Land Rover had a little doggy daycare area with attendants who would watch your dog while you were making a trip to the bathroom, getting a quick bite to eat or driving one of the Land Rover vehicles on the off-road course. While there, the attendants had treats for the dogs and Land Rover brand leashes for when you came to pick your dog up. The beauty of these many non-traditional forms of advertising at a non-traditional event is that shy of the Land Rover emblems scattered throughout the Kentucky Horse Park, the Land Rover presence is more subtle than most traditional advertising. While the people were there to see the horses and their riders compete, the Land Rover vehicles around the grounds gave viewers a chance to see the premium LR lineup and if they really liked the look of those Land Rovers – they could drive them in an off-road course inside of the venue. While they were driving, Land Rover would watch their dogs and if they wanted to meet Olympic medalist Zara Tindall along with checking out some premium equestrian brands – they could do so in the Land Rover Ultimate Stable.(More on the next page)

With many forms of traditional advertising – be it a television commercial which leads you to check your phone or an online advertisement that has to looking for the X to close the window – the person viewing that advertisement wants it to go away. On the other hand, the non-traditional forms of advertisement from the Land Rover brand at the Rolex Kentucky 3-Day Event introduces the brand to a big target audience in a way which makes spectators appreciate the brand’s presence.

The Rolex Kentucky 3-Day Event
While the folks at Land Rover add an interesting automotive element to the Rolex Kentucky 3-Day Event, the majority of the tens of thousands of people who flock to Lexington each year for this event are there to see the greatest horse and rider teams in the world work their magic. Some of the biggest names in the competition included Boyd Martin for the USA, Jessica Phoenix from Canada, Zara Tindall from Great Britain and Michael Jung from Germany. Jung (pronounced Young) came into the 2017 Rolex 3-Day having one the 2015 and 2016 Rolex 3-Day, along with the individual gold medal at the 2012 and 2016 Olympic Games, so he was the early favorite to take the win at the 2017 Rolex Kentucky 3-Day Event – but he would have to beat more than 60 of the best eventers in the world to secure his three-peat.

As mentioned above, the Rolex 3-Day has three individual disciplines – Dressage, cross country and show jumping.

Dressage is what some people like to call “horse dancing”, with the horses completely a designated pattern with certain gaits and movements on the flat while judges rank how well they make those movements. Cross country is a 4+ mile course with 28 jumps along the way, many of which are at least 4 feet high, and the riders are expected to get from start to finish in 11 minutes and 17 seconds without failing to clear any of the jumps. Show jumping takes place in the area, where the riders have a short amount of time to jump the jumps in a designated pattern, with each knocked down jump adding 4 fault points while time penalties add 1 fault point for every second over the time limit.(More on the next page)

The event began on Friday, as I joined tens of thousands of dressage fans who crowded into the Kentucky Horse Park’s Rolex Stadium for the first leg of the 3-Day Event. The dressage competition saw some familiar faces in the top 10, including America’s Phillip Dutton (on two different horses), Canada’s Jessica Phoenix (on two different horses) and France’s Maxime Livio, but it was American Clark Montgomery on his horse Loughan Glen who took the top spot in this first event.

Montgomery’s biggest challenge came when German gold medalist Michael Jung and his horse Fischerrocana stepped into the ring later in the round. The crowd hushed at one of the best dressage horse and rider combos in the world performed beautifully in front of the hushed crowd. When Jung finished his seemingly flawless dressage routine, the crowd erupted in appreciation. However, the judges put Jung just shy of Montgomery, so going into Saturday’s cross country portion, Montgomery was 1st, Jung was 2nd and American Kim Severson was 3rd. In the Rolex 3-Day, the fewest points wins and after the dressage portion, Montgomery had 33.6, Jung had 37.1 and Severson had 41.0. Unfortunately, the cross country course was not kind to the two top American riders from the dressage portion. Kim Severson retired from the competition during her cross country run and with a combination of 40 jump faults and 32.4 time faults, Clark Montgomery dropped from 1st to 34th. On the other hand, with a near-perfect run, German Michael Jung and Fischerrocana climbed into the top spot (38.7 points) with France Maxime Livio moving to 2nd (44.6) and Great Britain’s Zara Tindall moving up into the 3rd spot (46.6). It was during the cross country portion where American Erin Sylvester turned in a perfect run and for doing so, she won a free 2-year lease of a 2017 Land Rover Discovery Sport. Click here to read more about the perfect cross country run. In short, those scores mean that going into the show jumping portion, Jung simply needed to have a clear run under the time limit and he would win the Rolex 3-Day Event for the third straight year. In fact, with a lead of 5.9 points, Jung could drop one rail and be a second behind the 93-second limit and he would still be too far ahead of Maxime Livio for the Frenchman to catch up. On the other hand, Livio would have to be perfect through his show jumping ride to have a real shot of catching Jung. Along those same lines, Zara Tindall was close enough to Jung to have hopes of catching him, but the Brit needed to have a perfect ride while hoping that Jung would trip up – literally. Both Tindall and Livio did their part, being two of just three riders in the show jumping field to have completely clear rounds. Unfortunately for them, Michael Jung finished on time and he only dropped one rail, so he hung on to win his third straight Rolex Kentucky 3-Day Event by a margin of 1.9 points over 2nd place Livio and 3.9 points ahead of 3rd place Zara Tindall. Finally, in addition to the Land Rover attractions and the world-class competition, the Rolex Kentucky 3-Day Event has a massive collection of vendors with from every corner of the equestrian world (many of whom have regular autograph sessions with riders), a huge food truck court and exhibitions from a variety of other areas of the equestrian world. From boots and jackets for riders to bridles and saddles for the horse, literally everything anyone in the eventing world could need it available for sale in either the midway area of the “trade fair” portion of the Rolex 3-Day.

If you have even a mild interest in the world of 3-day eventing, the Rolex Kentucky 3-Day Event presented by Land Rover should definitely be on the list of places you want to visit in 2018.