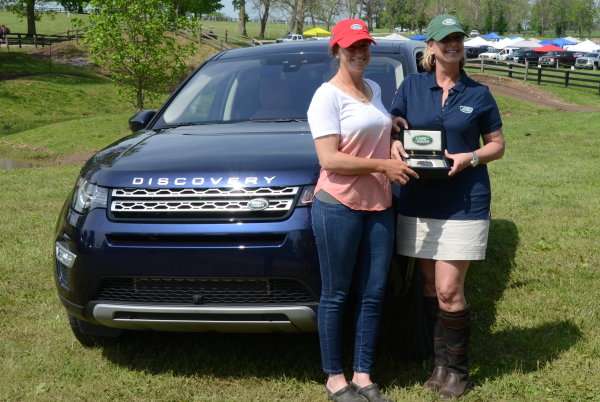 American Erin Sylvester turned in a perfect run during the cross country portion of the 2017 Rolex Kentucky 3-Day Event, earning her a free 2-year lease of a 2017 Land Rover Discovery Sport.
Advertisement

Each year, the best equestrian athletes in the world gather in Lexington, Kentucky for the Rolex 3-Day Event presented by Land Rover. The competition consists of dressage, cross country and show jumping, similar to the format use in the Olympics, so many of the competitors are Olympic medalist. In short for those who aren’t familiar with the equestrian competition world, the Rolex 3-Day is arguably the biggest competition of its type in the world, bringing fans from around the globe to Lexington, Kentucky to see the best riders in the world go head to head.

I was fortunate enough to be invited by Land Rover to attend this year’s Rolex 3-Day, and as a horse owner/rider myself, it was an exciting weekend of watching the world’s best horse and rider teams in action in person. It was a truly remarkable experience being there to see these athletes – both two- and four-legged – as they competed for the Rolex title. While there, I was fortunate enough to get a walk-through of the cross country course from British rider Zara Phillips and her father, Captain Mark Phillips along with watching the incredible competition with more than 50,000 hardcore fans of the equestrian sports.

As part of the event, each year Land Rover awards a free 2-year lease to the rider who turns in a time closest to the designated time goal for the cross country portion of the event and this year, American rider Erin Sylvester turned in the best time of the 60+ competitors.

Sylvester Drives Home a Land Rover
The field for the 2017 Rolex Kentucky 3-Day Event was chock full of heavily decorated veterans who were more or less expected to lead the field in each of the three disciplines, including Germany Michael Jung and his horse Fischerrocana FST. Jung won the 2015 and 2016 Rolex Kentucky 3-Day Events along with gold medals at the 2012 London Olympics, the 2016 Rio Olympics and the World Equestrian Games in 2010 and 2014. He is arguably the best rider in the world right now and he came in as the odds-on favorite to dominate the completion – and he did. Jung would end up winning the 2017 Rolex Kentucky 3-Day Event, but it was the American newcomer Erin Sylvester and her horse Mettraise who would turn in the best time of the cross country portion.(More on Page 2)

Sylvester, in her first Rolex 3-Day Event and her first 4-star completion, not only turned in the best time, but she is the first rider to win this award by running the exact time. The cross country event isn’t about who is the fastest from one end to the other but instead, who can get the closest to the specified time without any refusals of the many jump obstacles along the way. In this year’s competition, the target time was 11 minutes and 17 seconds, and the newcomer Sylvester was the first to hit that exact time without having any errors over the jumps along the way.

For turning in this perfect cross country ride at her first Rolex 3-Day Event, Erin Sylvester won a free 2-year lease of a 2017 Land Rover Discovery Sport. Upon receiving the award, Sylvester celebrated by driving the Discovery Sport around the intricate off-road course which Land Rover provides for Rolex 3-Day attendees who are interested in testing one of the sporty SUVs. After working with the automaker and the Land Rover dealership closest to her base of operations in Cochranville, Pennsylvania, Sylvester will take delivery of a new Discovery Sport with her option and color preferences for a free 2-year lease.

The video below shows Erin Sylvester’s Land Rover-winning run and if you are not familiar with cross country riding, I recommend that you watch at least a few minutes of the video to see what this young lady did to win that Discovery Sport. Really, the run is fantastic, so even if you are familiar with the sport, set a few minutes aside to watch her perfect run.