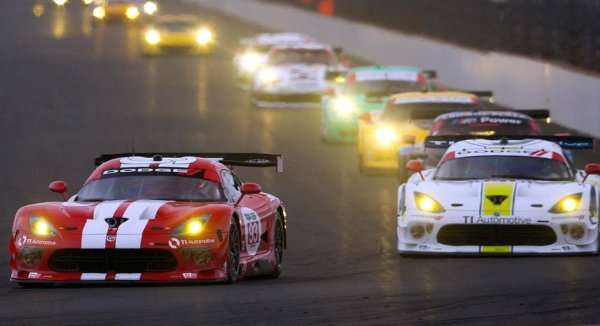 This past weekend marked the second event for the “new” Dodge Viper SRT GTS-R and like the Team Oreca Dodge Vipers of the 1990s and 2000s – the red and white V10 powered race car drove to a dominant victory on the Indianapolis Motor Speedway road course.
Advertisement

The production based GT LeMans racecars of the Tudor United Sports Car Championship headed to the famous Indianapolis Motor Speedway this past weekend for their 7th event of the 2014 season. The big story, as has been the case all season, was the battle between the new C7 Chevrolet Corvette Z06-based C7.R teams and the two Dodge Viper SRT GTS-R teams (whose cars had previously been known as SRT Viper GTS-R). The Corvette camped looked to win their fifth straight race and extend their lead in the championship race while the Viper teams looked to improve from their 2nd and 3rd place finishes in each of the past two events.

Corvettes Start Strong, Vipers Do Not
In the first practice session, the two Corvette teams and the two Viper teams didn’t put up all that great of a showing, with the Vettes being 6th and 8th fastest in the GTLM field while the Vipers were 7th and 9th – in the 10 car field. In practice round 2, both Corvettes moved up the chart a bit (4th and 7th) while the Vipers were 8th and 9th. It appeared as though the Corvette C7.R teams would look to be the stronger of the American GTLM cars through practice, but that changed in qualifying. The Dodge Viper SRT GTS-R teams qualified 3rd and 4th quickest while the Corvette C7.R teams qualified 6th and 10th in the class so as the teams headed into the 2 hour and 45 minute race – it appeared as though there would be quite a battle between the Motown supercars.

Vipers and Vettes Crash, Viper Wins
During the early stages of the race, the #93 and #91 Dodge Viper teams spent their time around the front of the field after starting towards the front of the field. The two cars ran together until the #91 was hit hard by one of the Prototype cars, which knocked the passenger’s side door off of the car and forced the team into the pits for repairs. The team got the Viper back on the track, but a crash later in the race forced Dominik Farnbacher and Marc Goossens to settle for the 8th spot, two laps off of the class pace. In much the same way, the #3 Corvette that leads the championship series was involved in an incident early in the race, forcing the car to the rear of the field and leaving the two drivers to spend their day fighting through the crowd. The #3 Corvette finished 4th in the GTLM class with the #4 Corvette right behind in 5th.

On the other hand, the #93 Viper spent the day working its way towards the front of the field and just before the last pit stop of the day, Jonathan Bomarito took the GTLM class lead. After the quick pit stop, Bomarito never looked back, cruising to a big win some 11 seconds ahead of the second place finishing Ferrari. This was the first win for the modern Viper racing program at the Brickyard and the first win since the modern Viper became the Dodge Viper SRT GTS-R along with being the second win for the Viper teams in the past two seasons.

Vipers and Corvettes Dominate the Championship Race
After a Corvette won four straight races and a Viper finished second and third in back to back races followed by the big win in Indy, the top five in the 2014 Tudor driver’s championship is comprised of two Corvette teams, two Viper teams and one BMW Z4 team. Antonio Garcia and Jan Magnusson (who drive the #3 Corvette) currently sit in the top spot in the driver’s championship with 219 points each, but the drivers of the #93 Viper – Kumo Wittmer and Jonathan Bomarito – are now in second place, just 13 points back of the Corvette drivers. Dominik Farnbacher and Marc Goossens sit in 4th place with 195 points (24 points out of first) while the #4 Corvette drivers of Oliver Gavin and Tommy Milner sit in 5th with 192 points.