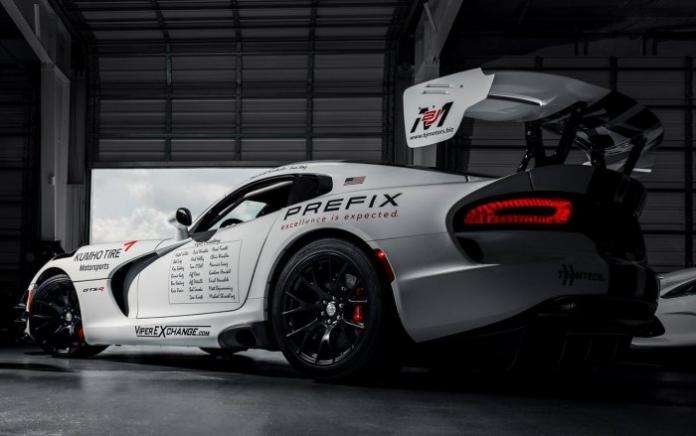 After turning in a time of 7:03.45 yesterday, the Dodge Viper ACR piloted by Dominik Farnbacher hit the track today for one more shot at the Nurburgring production road car record, but an odd mechanical issue coupled with more rain put an end to this attempt at the 6-minute range.
Advertisement

Yesterday afternoon, the organizers of the 2017 Dodge Viper ACR Nurburgring Production Record Run announced that Dominik Farnbacher had turned a lap time of 7:03.45. That beat the previous generation Viper ACR Ring record of 7:12.13, but it fell short of the production car record of 6:57 held by the 2014 Porsche 918 Hybrid. After that 7:03.45 lap, Dominik Farnbacher stated that he believed that the car definitely had a 6-minute run in it, they just needed a dry track to make a run. That chance came around 8am local time in Germany or around 2am EST, Farnbacher and his white Viper ACR Extreme hit the track.

Another Run at the Record
According to the track officials who are stationed along the 12.9 mile road course, the 2017 Dodge Viper ACR Extreme was setting an amazing pace about 2 minutes into the run, but when the 7-minute mark came, the Dodge supercar hadn’t made it back around the track. A few minutes later, the car came rolling down pit road with an unusual problem which killed what looked to be a great run.

Each car that is running the Nurburgring is required to carry some sort of radio device, which is mounted under the dash (based on the description). During Farnbacher’s early morning run, that radio came free of its mounting bracket and became lodged behind the clutch pedal and the brake pedal. As a result, Farnbacher was unable to depress the clutch or fully use the brakes and while he was able to fix the problem without incident, that interruption killed that run. The team then had to remount that equipment and, unfortunately, Farnbacher had to leave to prepare for a race this weekend. There was a possibility that he would return later in the day, before flying out of the country for the next race on his docket, but it started to rain once again and the team was forced to call it a day.

The group making the Dodge Viper ACR record run was there for 9 days and managed a best lap of 7:03.45, which beats the previous American production car record of the 2010 Dodge Viper ACR of 7:12.13 by a healthy margin. More importantly, the 7:03.45 lap time by the 2017 Dodge Viper ACR puts it in either the 2nd or 4th spot all-time in terms of production road cars at the Nordschleife. The three cars which have turned quicker times are the Lamborghini Huracán Performante (6:52.01), the Porsche 918 Spyder (6:57) and the Lamborghini Aventador LP 750-4 Superveloce (6:59.73), but the Lamborghini times were recorded by the automaker without any witnesses, so those times are often disputed by many people in the industry. The Porsche 918, on the other hand, turned that 6:57 run with witnesses, so there is no disputing that time.

While the team is likely disappointed that they werent able to get into the 6-minute range or break the production road car record, but 7:03.45 is an incredible time and they should be proud of their effort. There is a chance that they could go back for one more shot at the record in August, but that will take another crowdsourced funding effort to the tune of $50,000.

In the meantime, the Dodge Viper is the quickest American car and the quickest rear wheel drive car to lap the 12.9-mile Nurburgring Nordschleife.