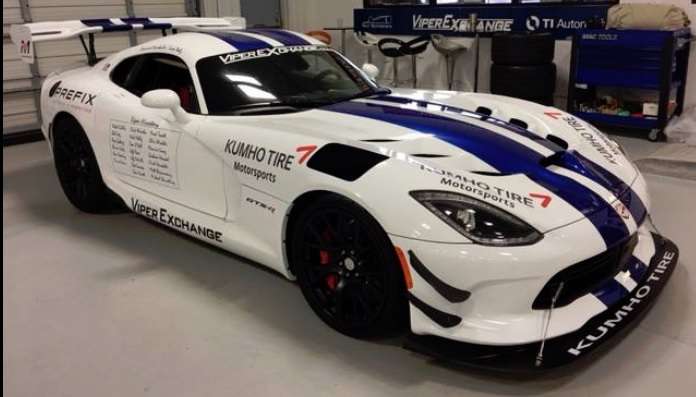 The first solid lap time for the current record run attempt by a pair of Dodge Viper ACRs has been announced and with a lap of 7:03.45, the new American Club Racer is the 4th quickest production road car – and the team plans to make more runs before heading back to the US.
Advertisement

We reported last week that the crowdfunded effort to break the Nurburgring Nordschleife with the new Dodge Viper ACR had begun, with a pair of cars, a pair of drivers and a large support team traveling from the US to Germany to spend some quality time with the world’s most infamous road course. The folks in Germany and nearly 400 financial donors believed that the 5th generation Dodge Viper American Club Racer (ACR) could beat the previous generation Nurburgring record of 7:12.13 and based on initial reports – they were right.

However, it has not been easy.

Nipping at the 6-Minute Range
The Dodge Viper ACR record attempt team arrived in Germany last week with the plans of spending a few days practicing before making their official record run on Monday (the 24th). Unfortunately, some of their early practice efforts were hampered first by rain and then by an unusual mechanical issue, with the rear wheel bearings failing after long periods of track time. Fortunately, a Viper ACR owner in Germany was able to provide replacement parts and representatives from Prefix (one of the key sponsors of the record attempt) flew from the US to Germany with more replacement parts, so that issue with nipped in the bud.

The team was ready to make their record run on Monday, but it rained, so they got more practice time on the wet track, planning to make their record run today. The weather was clear and Farnbacher was able to get the new Viper ACR around the Ring in just 7 minutes and 3.45 seconds. That is nearly 10 seconds quicker than the record set by Dominik Farnbacher in the previous generation Viper ACR (7:12.13), but sadly, it does not break the record for the quickest production car to lap the Nurburgring Nordschleife.

The team does plan to make one more series of timed runs later this week, but even if they come home with the current time of 7:03.45, the 2017 Dodge Viper ACR will be the 4th quickest production road car to lap the 12.9-mile road course. Not counting the Radical SR8 race cars, which aren’t legal in many countries, the Viper trails only the Lamborghini Huracán Performante (6:52.01 – this was with no witnesses and the time is disputed by many people in the industry), the Porsche 918 Spyder (6:57) and the Lamborghini Aventador LP 750-4 Superveloce (6:59.73).

Mind you, the 2017 Dodge Viper ACR driven in Germany by Dominik Farnbacher is a full production model, right down to the Kumho tires. Best of all, Farnbacher told the team that he believes that the car does have a 6-minute run in it, so if they do get clear weather tomorrow, we could see an even quicker time. Really, the 7:03 is awesome, but a sub-7 run would be a great way to end the trip.

Elon Makes a Cybertruck Statement With an Action, But Quiet in Words
Tesla's Record Month in China: Doubled Registrations in March 2021
END_OF_DOCUMENT_TOKEN_TO_BE_REPLACED