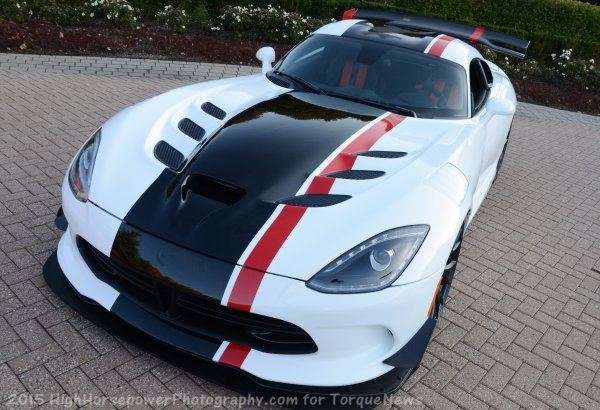 Dodge Viper ACR Approved for Production, Here's What to Expect

Dodge got everyone’s attention at the 2014 SEMA Show when they introduced a Viper ACR Concept that looked very much like a production friendly model and according to an insider who spoke with Allpar, the Viper American Club Racer will become a production reality this summer.
Advertisement

According to one of Allpar’s regular insider informants, the Dodge Viper American Club Racer (ACR) has been approved, shifting the project from a SEMA concept to a production reality. The newest Viper ACR is expected to begin rolling off of the assembly line in July of this year as a 2016 model year vehicle and while we don’t have any details as to what we can expect from the production car, the SEMA Show Viper ACR Concept is likely to be very similar to the production version.

Dodge Viper ACR History
While the Dodge Viper has long made a name for itself as being one of the best performing American production cars of all time, the American Club Racer took that performance to the next level.

The ACR logo first appeared on the Dodge Viper in 1999, when the Viper GTS Coupe was enhanced to create the American Club Racer by adding a unique suspension setup, BBS wheels, adding a touch more power and removing some weight from the interior.

The Viper ACR became the supercar that set so many track records around the world in 2008, during the third generation of the Dodge supercar. The 2008 Viper ACR featured two piece rotors, adjustable suspension, a serious aerodynamics package that included a huge rear spoiler and lightweight wheels wrapped in Pilot Sport Cup tires, but no actual power-adding modifications. When you added the Hardcore Package, the 2008 and newer Viper ACR ditched the entire sound system, the air conditioning, the trunk carpeting, the hood pan and the tire inflator, which helped to cut 40 pounds from the already svelte supercar.

It was a 2010 Dodge Viper ACR that went to the Nürburgring in Germany and set a lap time of 7:12.13, which is still one of the fastest laps by a production road car, ever.

The 2016 Dodge Viper ACR
While we don’t know for sure, expect the 2016 Dodge Viper American Club Racer to be a great deal like the SEMA Show concept car and a great deal like the record-setting 2010 Viper ACR. Expect a prominent aero package with an ultra-aggressive front fascia and a huge rear wing, both of which will likely be comprised mostly of carbon fiber. We can also expect a set of unique lightweight wheels wrapped in the stickiest street legal tires available, with a gigantic braking package tucked behind said wheels. Like all of the ACR Vipers, the 2016 version will feature an adjustable suspension package, presumably a more aggressive version of the dual mode setup in the current Viper TA 2.0.

Finally, while I don’t expect to see much (if any) extra power in the 2016 Viper ACR, there will almost surely be a stripped down interior devoid of anything that doesn’t improve performance. This includes lightweight manual seats, no interior sound insulation and no high end infotainment package – all of which will help cut weight from the next generation of the most track capable American production car of all time.