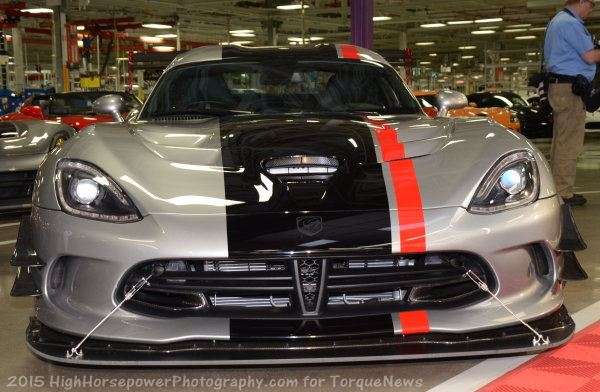 Dodge Unleashes a New Beast with the 2016 Viper ACR

Today at the Conner Avenue Assembly Plant in Detroit, the 2016 Dodge Viper American Club Racer made its grand debut with a host of features that the company promises will make the new ACR the fastest street legal Viper ever – and that is a serious claim.
Advertisement

After Dodge rocked the muscle car world in 2015 with the 707 horsepower Hellcat Challenger and Charger, the company promised to turn their attention to the mighty Viper for the 2016 model year. Today, the result of those efforts was unveiled at the Conner Avenue Assembly Plant in Detroit, where the company introduced the 2016 Dodge Viper American Club Racer.

The Viper ACR Legacy
In the world of supercars, there has never been a car from an American automaker that could truly compete with the Dodge Viper ACR. Really, based on the lap records turned in by the previous Viper ACR, there are very few factory-production cars sold in the world that can go toe to toe with the ultimate American supercar and that is proven by the fact that only two cars (Nissan Nismo GTR, Porsche 918) have gotten around the famed Nürburgring in less time than the “old” Viper ACR.

The problem created by having such an incredible track car a few years back is that is presents a tough challenge when trying to engineer a new and improved version as the previous Viper ACR was so good in every way. However, with the 2016 Viper ACR, Dodge claims to have come up with a car that is the fastest street legal Viper ever. The 2016 Viper ACR
When designing the 2016 Dodge Viper ACR, the engineering team used knowledge gained while winning the 2014 American LeMans GTLM championship and the 2015 Rolex 24 at Daytona. While the cars used in endurance racing isn’t street legal, the team applied similar features of the GTS-R race cars to make the new American Club Racer the best street legal track car that Dodge has ever offered. The new Viper ACR is powered by the same 8.4L V10 that motives all new Vipers, sending 645 horsepower and 600lb-ft of torque to the rear wheels via a heavy duty 6-speed Tremec manual transmission. The engine and transmission remain unchanged, but the vast majority of the key moving parts were swapped out in favor of components that make this car the most track capable Viper ever, but they did so while maintaining the manners needed to drive this car on public roads.

First up, the Viper ACR features a Bilstein suspension setup designed specifically for this car, with adjustable front and rear dampers that offer 10 levels of stiffness for both rebound and compression. These dampers were paired with the stiffest springs ever offered on the Viper, with 600lbs/in of force in the front and 1,300lbs/in of force in the rear. The electronic stability control has also been retuned to work with this track-ready suspension setup and with the help of the new Kumho Ecsta V720 tires in the front and rear, this new Viper ACR can sustain 1.5g through high speed turns.

In order to make sure that the 2016 Viper ACR can stop just as well as it sticks to the turns, Dodge has fitted this package with a new Brembo Carbon Ceramic Matrix braking system featuring 15.4 inch rotors up front with 6-piston calipers and 14.2 inch rotors out back with 4-piston calipers. This rotor and pad setup affords the new ACR the largest braking surface of any Dodge car ever, so when these cars hit the track, they should be able to come down from speed quicker than the previous Viper ACR. Finally, the Dodge team looked to make the 2016 Viper American Club Racer the most aerodynamic of all American supercars and they achieved that with the Extreme Aero Package. This includes an adjustable rear spoiler with dual planes, a lower rear diffuser that extends up to the middle of the undercarriage, one of the largest adjustable front splitters I have ever seen on a road car, two carbon fiber dive planes on each side of the front end and a set of vents above the front wheels to more air out of the wheel wells as quickly as possible. As a result of these components, the 2016 Viper ACR creates an incredible 2,000lbs of downforce at 177 miles per hour.

Build One Your Way
The 2016 Dodge Viper ACR also comes with a weight reduction package that includes lightweight carpeting, a 3-speaker sound system and lightweight manually adjusted seats. However, the ACR package offers the same full customization options at the rest of the modern Viper lineup so if you want heated leather seats with power adjustment and a high end Harman Kardon speaker system, you can opt up to those features. Oh, you can also order the 2016 Dodge Viper ACR in any color that you can imagine, so you can essentially order your new Mopar supercar in your team’s racing colors – you just have to add the decals.

The 2016 Dodge Viper ACR will launch in the 3rd quarter of 2015 and while pricing hasn’t been announced thus far, we can expect the fastest Viper ever to be the most expensive option in the modern Viper lineup.

kim peterson wrote on November 5, 2015 - 1:24pm Permalink
I have owned 4 Viper, & currently own 2. My latest is a new Gen v, this car by far is the most astonishing car I have ever owned. Style , performance ,cost, interiors you name it this is the best bang for the buck of any exotic hand built super car on the earth. Don't stop, do not wait one minute, any year viper will never be any cheaper than they are right now. Go , run , steel money from your piggy bank and buy one, any year just buy one before its too late. They will never be any cheaper. Your last chance to buy an American icon of witch we have not seen since Shelby Cobras sat on car lots and could not be given away. This is your chance to own a piece of history, to join others in the life of a Viper owner, join the Viper nation you will not regret the experience. Long live the iconic track king of all time, beware of the snake.