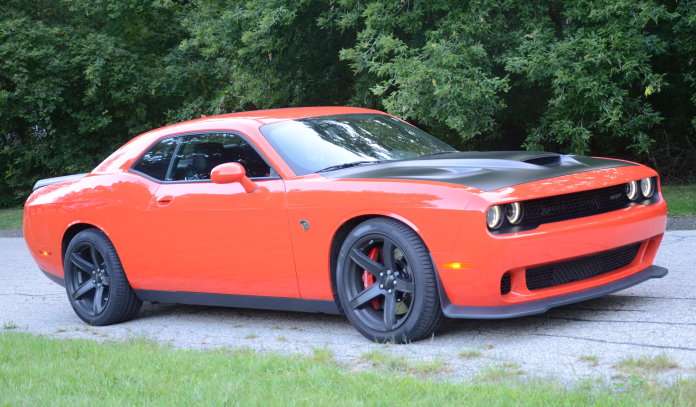 If you have been dreaming of buying a Dodge Challenger or Dodge Charger with the 707hp Hellcat Hemi, now could be the time for you to score your supercharged muscle car, as both used and new-old-stock prices have gotten to their lowest points since these Mopar muscle cars were released for 2015.
Advertisement

The Dodge Challenger SRT Hellcat and the Dodge Charger SRT Hellcat are two of the most amazing American performance cars ever. The 6.2L Supercharged Hemi makes each of these cars the most powerful options in their respective classes and among sedans, there is no vehicle which offers a greater combination of low-end acceleration and top-end speed. Best of all, with an MSRP for each car starting in the mid-$60k range, these are the most affordable 700+ horsepower cars in the world.

Unfortunately, paying $65-67k for a new car is a stretch for most people to begin with and when you begin tacking on options, the Hellcat Challenger and Hellcat Charger are more likely to have an MSRP in the low-$70k range. That $70k range scares some people away, but with some hunting, hopefully Hellcat shoppers can score a supercharged Mopar muscle car for far below MSRP – but it will take a little work.

Discounts on New Hellcat Cars
As a Hellcat owner, I am an active participant in the online community and through the social media networks, I often see people posting about smokin’ deals on Hellcat Challengers and Chargers. Believe it or not, as well as the Hellcat cars have sold over the past 3 years, there are still some new 2016 models sitting at dealerships around the country. Of course, there are still 2017 models at dealers as well and over the past few months, the 2018 models have begun reaching showrooms as well.

With 2018 models arriving, dealers want to get rid of the 2017s and they really want to get rid of any 2016s, and that desire to move these “older” models leads to deep discounts. For example, some dealerships are advertising well-appointed 2016 Hellcat Challengers online for as low as the $54k range, which is $10-15k less than MSRP (depending on the options and such). It does seem that the 2016 Challengers are more readily available, but there are still come 2016 Hellcat Chargers available at new car dealerships and while there seem to be smaller discounts on the sedans, there are dealers right now advertising discounts of $5,000 and up.

Finding a 2016 Hellcat Challenger or Charger will bring you the lowest price, but they are also in short supply at this point, so you may have to travel to score one of those deals. On the other hand, there are plenty of 2017 models at dealers all over the country, and while they aren’t discounted as much as the 2016s – the 2017 Hellcat cars are being sold for well below MSRP. Online sales ads have revealed prices for the 2017 Hellcat Challenger in the low-$60k range while the Charger runs slightly higher than the coupe, while still being well below the original sticker price.

Also, while this varies far more by area, I have seen some incredible lease deals posted online by people who jumped on them. In some cases, people have paid as little as $500/month for a Hellcat lease without putting a massive amount down, so if you are looking to lease, shopping around can score you a shockingly-low price.

Used Prices Dropping
Over the course of the past year, it seemed as though most used Hellcat Challengers and Chargers being advertised for sale online were listed very near their MSRP. In many cases, people were still asking – and getting – around $65k for a car that cost a touch over $70k when new, but that has changed over the past few months.

As the 2016, 2017 and 2018 models are all on the same lots and dealers have slashed 2016 pricing well into the $50k range, the used car market has been pushed down into the low-50s and high-40s. Figure that if you can buy a new 2016 Hellcat Challenger or Charger with a dozen miles for $55,000 you aren’t going to consider paying mid-50s for a similar car with 10,000 miles. As a result, used prices have been pushed down into the $40k range, so if you are interested in a used Hellcat, those prices have dropped to all-time lows as well.

Of course, if you don’t want to do any hunting, you can buy a 2018 Hellcat Challenger or Charger and expect to pay MSRP or slightly under – but with some internet research and a willingness to travel, you can get an incredible deal on a new or used Dodge Hellcat car.

Jaroslav wrote on November 28, 2017 - 8:36pm Permalink
All of the muscle cars are now on huge sale. Camaros, Corvettes, Dodge Chargers and Challengers. It's probably because the market is very slow these days. Why do you guys think the market is slow?
Jerry wrote on November 28, 2017 - 8:42pm Permalink
Well main reason the auto market is slow is actually because of the millennials. They don't spend money for cars. If they do its not big muscle. I spoke to my friend at Chevy dealership. He said big engine cars sales are down. Look in Australia, they killed big v8 car, and when you look at car companies, v6 is the new thing for them. With boosts, and turbos, same 4 cylinder.