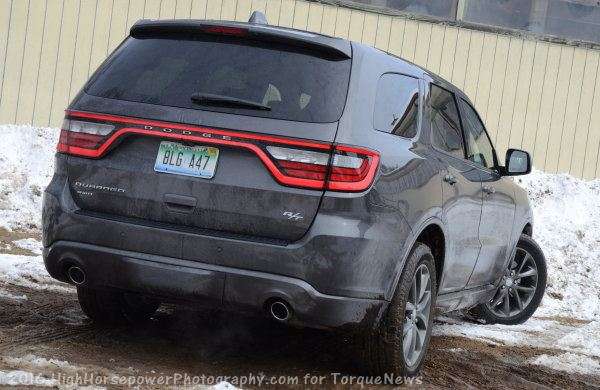 Rumors of a high performance Dodge Durango SRT have been rekindled by spyshots showing a test vehicle with a new, more aggressive front fascia which many believe will be a Hellcat Durango – but one of the insiders from Allpar suggests that the SRT Durango will pack the 392 cubic inch Hemi rather than the Hellcat Hemi.
Advertisement

As long as the Jeep Grand Cherokee SRT has existed, here have been Dodge Durango fans and owners clamoring for a high performance version of the three-row sport utility vehicle. The Durango and Grand Cherokee are built at the same plant on the same basic chassis platform, and while packaging differs between the two brands – the Durango is mechanically very similar to the popular large Jeep. Because of the many similarities, Dodge fans have long expected that an SRT Durango was a logical next step for the sporty SUV, but after years of prayers from fans and rumors from just about everywhere, there has never been anything to prove that an SRT Durango was actually on the way.

That all changed recently when spy shots began popping up online showing a Dodge Durango test vehicle with a low, aggressive front fascia. The internet rumor mill quickly declared that this Durango test mule simply had to be the next Hellcat model, but the Chrysler Group gurus at Allpar have inside information to suggest that there is an SRT Durango on the way – but it won’t pack Hellcat power.

The SRT Durango
According to one of Allpar’s reliable sources, there is a high performance Dodge Durango coming to market, but it will be powered by the 6.4 liter, 392 cubic inch V8 that currently motivates the Jeep Grand Cherokee SRT, the Chrysler 300 SRT and the non-Hellcat SRT Challenger and Charger. In those vehicles, the 392 Hemi provides 485 horsepower and 475lb-ft of torque, and in the Durango, that output would make it one of the quickest/fastest SUVs sold in the US.

Of course, it wouldn’t be “Hellcat quick”, but the 392 Hemi mated to the 8-speed automatic transmission, the Jeep’s adjustable drive modes and a big set of Brembo brakes will finally give Dodge Durango fans the high performance SUV that they have been asking for over the past decade or so.

Why No Hellcat?
While this most certainly isn’t official information which kills the chances of a Hellcat Durango, it seems that the SRT Dodge SUV is more likely to have the smaller of the SRT Hemi engines…at least at first. Considering the high level of demand for the Hellcat Challenger and the Hellcat Charger, as well as the perceived demand for the Hellcat Jeep, the company needs to tread lightly on rolling out this engine in multiple vehicles at once.

The Challenger and Charger ran into a supply chain bottleneck which slowed deliveries and clogged up the ordering process, and I believe that the company has learned from that experience. With the Challenger and Charger in Hellcat trim continuing to sell quickly on lots around the country and the expected success of the Hellcat Jeep, the company isn’t going to risk more backorder issues by rolling out two new Hellcat trimlines in a narrow period of time.

That being said, I believe that we could still see a Hellcat Durango in the future, but that will only happen after the demand for the Hellcat Charger, Challenger and Jeep has been completely satisfied. In the meantime, a 485 horsepower Durango will go a long way in pleasing those folks who want a high performance SUV with a more street-ready look than the Grand Cherokee SRT.

Bo wrote on September 6, 2016 - 9:32pm Permalink
I am a Durango owner now an R/T. I've been waiting in an SRT Durango . Please keep me updated on the new Durango SRT