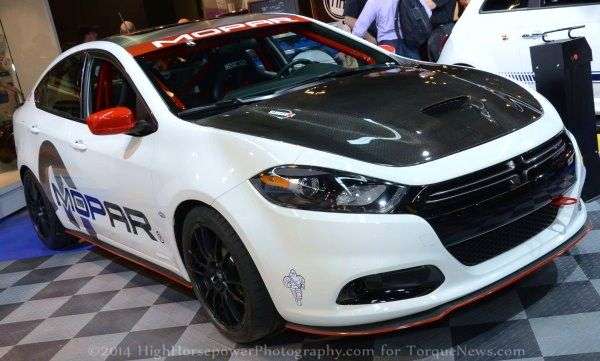 The Chrysler 5 year plan revealed that a new Dodge Dart SRT will arrive late in 2016 with a turbocharged 4-cylinder engine and all wheel drive, which very well could allow the high performance Dart to dominate the American sport compact segment – but what does it need to become a legend like the Dodge Neon SRT?
Advertisement

The Chrysler Group has announced that there will be a Dodge Dart SRT in late 2016 and that it will feature a turbocharged 4-cylinder engine and a new all wheel drive system…but they didn’t go into any further detail as to how well this car will perform. Fortunately, by looking at the previous compact SRT product – the Dodge Caliber SRT4 – and by looking at the top dogs in the American sport compact segment we can make a few estimates as to what we can expect from the 2017 Dodge Dart SRT.

Although the sport compact market in the US isnt quite what it was when the Dodge Neon SRT4 stormed onto the scene in the early 2000s, many of the same major players rule the segment today. The monsters of the segment are the Subaru WRX STI and the Mitsubishi Lancer Evolution X; both of which feature a powerful turbocharged 4-cylinder engine and an advanced all wheel drive system. Following those models we have the Ford Focus ST (which didn’t exist to compete with the Dodge Neon SRT4 or the Dodge Caliber SRT4) which offers slightly less power and no all wheel drive.

Finally, we have models like the Honda Civic Si and the Hyundai Veloster Turbo, but those models will likely be so far underpowered compared to the Dart SRT that they won’t be included in the conversation unless they get huge power upgrades before 2016.

Realistically, for the Dodge Dart SRT to be the brawler that the Dodge Neon SRT4 was years ago, it will need to compete with the Subaru WRX STI, the Mitsubishi Lancer Evolution X and the Ford Focus ST. Considering that the Dodge Caliber SRT4 that is the evolutionary predecessor to the upcoming Dart SRT and the SRT Caliber offered 285 horsepower and 265lb0-ft of torque, I would expect that the high performance Dart will have at least that much power. Keep in mind that it was found that the Caliber SRT4 almost made as much power at the wheels as the company advertised so in all reality, the Caliber SRT4’s turbo 2.4L mill made more than 300 horsepower at the crankshaft.

Based on those numbers, the Caliber SRT4 should have been able to compete with the STI and the Evo, but the fact that the SRT Caliber was only offered with front wheel drive forced it to fall short of the Japanese competitors in terms of straight-line and cornering performance.

The Caliber SRT4 was powered by a 2.4L turbocharged “world engine” and the 2.4L 4-cylinder engine currently at use in the Dodge Dart GT is a successor of that same engine family. In short, there is no reason that the company cannot use the current 2.4L engine, a similar turbocharging setup and modern engine technology to produce every bit as much power in 2016 as the Caliber SRT4 did back in 2008. The fact that the 2017 Dodge Dart SRT will have a vastly more advanced chassis and suspension system combined with an advanced all wheel drive system should allow this compact sedan to at least compete closely with the STI and the Evo – regardless of the engine packed under the hood.

Also, there seems to be no question that the Dart SRT will outperform the Focus ST on every level unless the company unbelievably opts to give the new performance sedan far less power than the old Caliber SRT4.

Best of all, the Dodge Dart SRT just might undercut the price of the competitors by a massive amount. If you build and price the current Dodge Dart to be as expensive as possible, configuring the Dart Limited with every single option available online, the MSRP is $25,824. The 2015 Subaru WRX STI starts at $35,290 while the 2014 Mitsubishi Lancer Evolution X starts at $35,805 so both of the top dogs in the current sport compact segment start around $10,000 more than the current most expensive, fully loaded Dart. If the Dart SRT is like the Neon SRT4 that was unquestionably the most successful Chrysler Group sport compact ever, the Dart SRT will do without items that add weight and cost, but do not improve performance.

This means that the SRT package will likely not be built around a fully loaded car so when the turbocharged engine, sport tuned suspension, high performance braking package and advanced all wheel drive system are added – it is hard to imagine that the Dart SRT will cost more than the STI or the Evo.

In short, I would expect that the 2017 Dodge Dart SRT will have 300 horsepower, 300lb-ft of torque, a manual transmission, an advanced all wheel drive system, sport tuned suspension, a performance braking package, unique exterior components that improved aerodynamics, a purpose built cockpit with plenty of optional goodies – and it will have this all for under $30,000. You heard it here first…the Dodge Dart SRT will have a starting price under $30,000 with options that could drive the price up near that of the Subaru WRX STI, but the bottom line is that those American buyers who want an American car that will take down the best in the sport compact segment for under $30k.