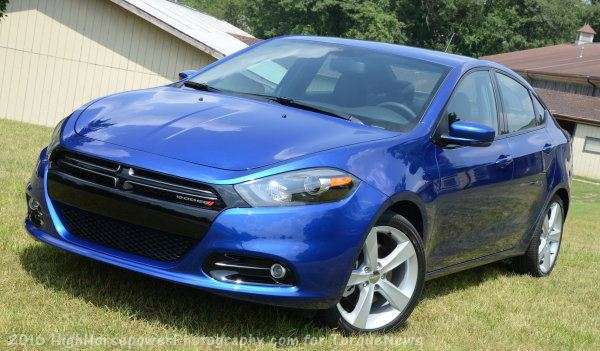 After just five model years, the Dodge Dart will seemingly meet its demise when production ends in September at the company’s Belvidere, Illinois plant – clearing the way for production of the far more popular Jeep Cherokee.
Advertisement

While it doesn’t come as a huge surprise, the Chrysler Group announced yesterday that production of the Dodge Dart will cease sometime in September, seemingly announcing the end of the sporty compact sedan. This announcement follows Sergio Marchionne’s comments earlier this year suggesting that the Dart was on its way out of the lineup, but those comments didn’t offer a good idea as to when the smallest Dodge car would leave production – but know we know that the end is very, very near for the short-lived Dart sedan.

Slow Sales in a Massive Segment
When the Chrysler Group (now FCA) rolled out the Dodge Dart back in 2012, the hope was that this new compact sedan would see similar success to that of the Dodge Neon from the late 1990s and early 2000s. The new Dart officially went on sale in June of 2012 with 202 units sold, but by the end of that calendar year, sales of the Dart had quickly risen up to 6,105 units in December. The company sold 25,303 Darts in that short first sales year, but the numbers would increase substantially for 2013.

Now, keep in mind that the Dodge Dart entered the “C segment”, which contains the Ford Focus, the Chevrolet Cruze, the Toyota Corolla, the Honda Civic, the Nissan Sentra and the Hyundai Elantra – to name a few. The reason that I picked those vehicles by name, is because each and every one of them appear on the list of the bestselling vehicles in America. The Corolla, for instance, was the second bestselling car in 2015 with 363,332 units sold and the Honda Civic was fourth best in 2015 sales among all cars with 335,384 units sold. During 2015, Chevy sold 226,902 Cruze sedans and Ford sold 202,478 examples of the Focus.

In the end, from June 2012 through June 2016, the company has sold 311,256 examples of the Dodge Dart – less than the sales figures for the segment’s bestsellers for a single year. The Dart didn’t sell badly compared to some other vehicles in the FCA lineup, but it sold very poorly compared to the rest of the vehicles in the segment, so after just five years in the system – FCA will end production of the sporty little sedan.

Belvidere Will Build Jeeps
In addition to the Dodge Dart being built at Belvidere, the Jeep Compass and Patriot are also built at the Illinois facility. The Dart production is slated to end in September and both small Jeeps will come to an end in December, but there is good news for the workers at the Belvidere Assembly Plant.

FCA is investing $350 million into the plant for retooling to build the popular Jeep Cherokee, so while the vehicles currently built there will all be out of production by the end of the year, production of the midsized Jeep should keep everyone working. In fact, once the company’s plan for the plant has been carried out, around 300 new jobs will have been created at Belvidere.

Sanju wrote on October 30, 2016 - 10:51pm Permalink
I am planning to buy used dodge dart is available for company services