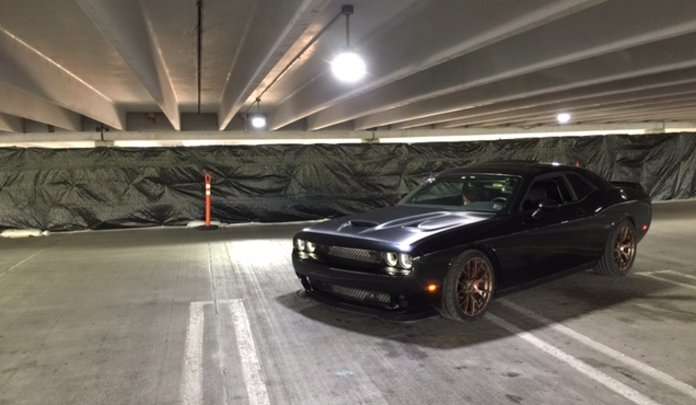 This past weekend, David Crockett and his 2009 Dodge Challenger SRT8 rocketed down the quarter mile in just 9.53 seconds during the Modern Street Hemi Shootout event at Virginia Motorsports Park – setting a new world record for the quickest modern Challenger with a 6-speed manual transmission.
Advertisement

Before getting into David Crockett’s world record run, I want to clarify his record claim. In running a 9.53 quarter mile, Crockett’s 2009 Dodge Challenger SRT8 set the record for the quickest quarter mile time by a modern Mopar machine with the factory-equipped 6-speed manual transmission. Some of you might be wondering how this record relates to the current Dodge Challenger SRT Hellcat quarter mile record set by the Epling Garage car at 9.06. Leon Epling’s record-setting Hellcat Challenger does feature a manual transmission, but it is an aftermarket racing transmission, not the factory-equipped TR6060, and that is the key difference between the two records.

With the Liberty race transmission, Leon Epling’s Hellcat Challenger set the record for the entire Hellcat community, but in terms of those Mopar muscle cars with the original 6-speed, David Crockett’s Challenger is the quickest in the world. Not to take anything away from the Hellcat record-setting run in the Epling Garage Challenger, but this 2009 Dodge Challenger SRT8 is being shifted with the clutch like your average street-driven cars – and David Crockett gets through the gears well enough to lay down a mid-9-second quarter mile. No Dodge Challenger with the factory-equipped manual transmission has run a quicker ET. Crockett’s Challenger is powered by a HHP/BES 438 cubic inch Hemi fitted with a ProCharger F1A-94 supercharger – packing more than a thousand rear wheel horsepower. All of that power is channeled through the Tremec TR6060 manual transmission which came from the factory, although the internals have been upgraded by RPM Transmissions to handle all of the power and the stock clutch is long gone, with a McLeon twin disc setup in its place. Out back, there is a DriveShaft Shop 9” rear differential and a set of 29.5x10.5x15 MT racing slicks which help this brawny Mopar muscle car get away from the line in a hurry.

On the inside, David Crockett’s 2009 Challenger SRT8 features Braun Racing seats and a 10 point roll cage from John Koziel of JK Fabrication and Performance. Setting the 6-Speed Record
Coming into this racing season, the 6-speed modern Mopar quarter mile record was held by Bill Gamble and his Hellcat Challenger with a time of 9.64. On Saturday, September 9th at the LX and Beyond Nationals in Ohio, Crockett and his Challenger SRT8 beat Gamble’s record, running a 9.55 at 148.07 miles per hour and this past weekend at the Modern Street Hemi Shootout event in Virginia, Crockett backed up his 9.55 with a 9.53 at 148.44 miles per hour.