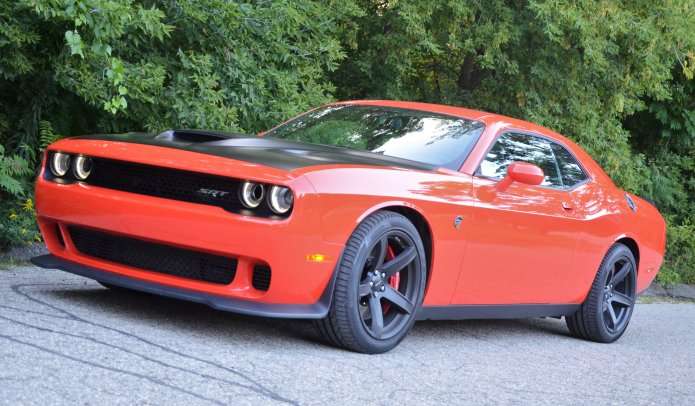 August 2017 sales numbers from around the industry are in and for the 2nd time this year, the Dodge Challenger has outsold both the Ford Mustang and the Chevrolet Camaro – allowing the brawny Mopar muscle car to pull into 2nd place in the annual muscle car segment sales race.
Advertisement

When the Chevrolet Camaro was introduced late in 2009 for the 2010 model year, it completed the modern muscle car era lineup, joining the Dodge Challenger and the Ford Mustang. During the few years when the Challenger existed and the Camaro did not, the Hemi-powered Dodge regularly finished 2nd to the Mustang in the monthly and annual sales race. When the Camaro returned and immediately climbed to the top of the sales chart, the Challenger normally finished in 3rd each month and every year.

However, Dodge Challenger sales have remained strong even with the current car heading into its 4th model year while sales of the 6th generation Chevrolet Camaro have been slow since the newest version was introduced. At the same time, Mustang sales have slumped considerably as buyers wait for the refreshed 2018 models, allowing the Challenger to lead the monthly muscle car sales race for the 2nd time this year while also pulling into the 2nd position in the annual sales race.

In August 2017, FCA sold 6,253 examples of the Dodge Challenger – one of which was my beautiful Go Mango Hellcat shown above. The Challenger improved by about 900 units over July 2017 while improving by almost a thousand units compared to the same month last year, but compared to the rest of 2017, August was a fairly average month for the Challenger.

The Ford Mustang finished 2nd in August 2017 muscle car sales with 5,535 units. The Mustang dropped by about 670 units from July, which isn’t that bad, but when compared to August 2016, the Mustang declined by 33%. This drop likely comes from people waiting for the refreshed and more powerful 2018 Mustang, which means that Ford will likely see a spike in sales late in the year, but in any case, this drop has forced the mighty Mustang to slip to 2nd.

The Chevrolet Camaro improved from July to August 2017, but this August was 10% worse than last August as the 6th generation Camaro fails to attract buyers. August 2017 was also the 3rd straight month where it was beaten in sales by both the Mustang and the Challenger.

In the race for the 2017 muscle car segment sales title, the Ford Mustang still holds a healthy lead with a current total of 56,349 units sold, but the Dodge Challenger has now pulled into 2nd place with 47,496 units sold. The Camaro now sits 3rd with 46,297 units sold through the first 8 months of the year, and at this point, it might be hard for the Chevy to move back into 2nd.

Right now, the Camaro is only 1,199 units behind the Challenger, but the 2018 model year Challenger will benefit from the new Hellcat Widebody and the new 840hp Demon. With heavy pre-orders for both of those cars, Dodge could see a substantial increase in Challenger sales through the last few months of 2017 and while that likely won’t allow Dodge to catch Ford – it looks like the Challenger has a very good chance of finishing 2nd in the annual sales race.

e wrote on October 24, 2017 - 10:54am Permalink
"The Camaro now sits 3rd with 46,297 units sold through the first 8 months of the year, and at this point, it might be hard for the Chevy to move back into 2nd"...well as you reported in Oct because of a really strong Sept, Camaro has done just that, moved back into 2nd place