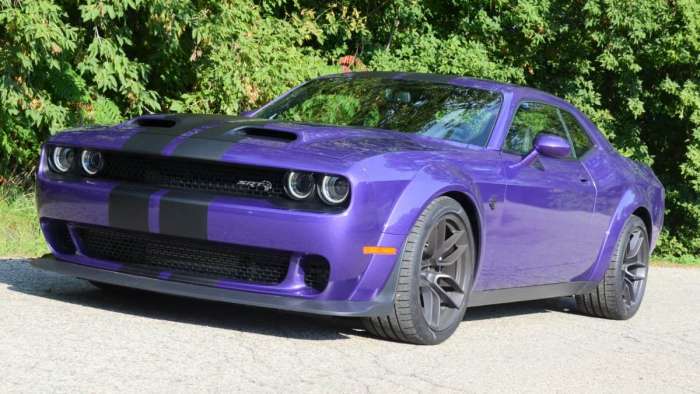 After four years of strong sales growth based on the 2015 redesign and the Hellcat Hemi, Dodge Challenger sales appear to be declining as the industry as a whole slows down.
Advertisement

Over the past decade, I have regularly reported on the monthly sales race between the Dodge Challenger, the Ford Mustang and the Chevrolet Camaro. Last year, General Motors switched to a quarterly reporting system, leaving me only the Mustang and Challenger to compare each month, and Ford began reporting on the same schedule earlier this year. That has made it impossible for me to put together a monthly muscle car sales race piece, but having gotten a handful of inquiries about Challenger sales, I put together this piece.

It should be noted that starting in July, FCA will also go to a quarterly sales reporting system, so while I will be able to bring you Challenger sales in May and June, we will only have quarter muscle car sales numbers to discuss starting in the second half of this year. That is probably a good thing, as with the American auto industry as a whole leveling out and cars becoming less popular, all of the American muscle cars have slowed their rate of sales growth dramatically, leading to some relatively ugly numbers.

The Bubble had to Burst
When the Ford Mustang and Dodge Challenger were both refreshed for the 2015 model year, both companies saw a boom in sales from their new muscle cars. This boom helped Ford jump ahead of Chevrolet to lead the segment several years in a row while the Challenger saw its best numbers of the modern era. These improvements in muscle car sales volume for Ford and Dodge came at a point when the industry as a whole was on an upswing, but with every big climb in sales comes a fall.

Everyone who is familiar with the ebb and flow of auto sales knows that sooner or later, a streak of strong growth like the one posted by the Challenger over the past few years has to eventually come to an end, and it looks as though we are at that point. This fall came much later for the Challenger than it did for the Mustang, but as the American auto industry levels out a bit – with the popularity of cars diminishing a great deal – Dodge’s muscle car sales have seemingly plateaued.

In other words, we have seen such strong numbers for years that the numbers that we are seeing this year from the Challenger and look bad, but in reality, the current sales numbers are still well-above where they were prior to the introduction of the modern generation of each. More significantly, with so many models and brands posting negative growth across the board, the decline in sales growth by the muscle cars is more of an industry issue than a segment issue.

April US Sales
In April 2019, Dodge sold 4,422 examples of the Challenger in the United States, down 25% from the same month last year. On the year, the Challenger has been pacing at roughly a 25% decline over the previous year, but it still comfortably beat the Chevrolet Camaro during the first quarter of the year.

Since we are only discussing the Challenger here, I figured that I would include Charger numbers as well. The muscle sedan was down 8% in April with 6,101 units sold, while the annual total of 26,716 is 4% below where it was after the first four months of 2018. Again, with the American industry flattening out in terms of sales volume, neither of these declines come as a big surprise.

FCA might introduce incentives to help sell more Challengers this year, but with the current slump across the industry, particularly among cars, the odds are good that the Dodge muscle car and muscle sedan will continue on with the decline in sales compared to last year.

LG's New EV Battery Plant Is a Welcome News for Tesla
Tesla Giga Berlin's New Hurdle: It's Not Only the Gov't, but Now Tesla Itself
END_OF_DOCUMENT_TOKEN_TO_BE_REPLACED