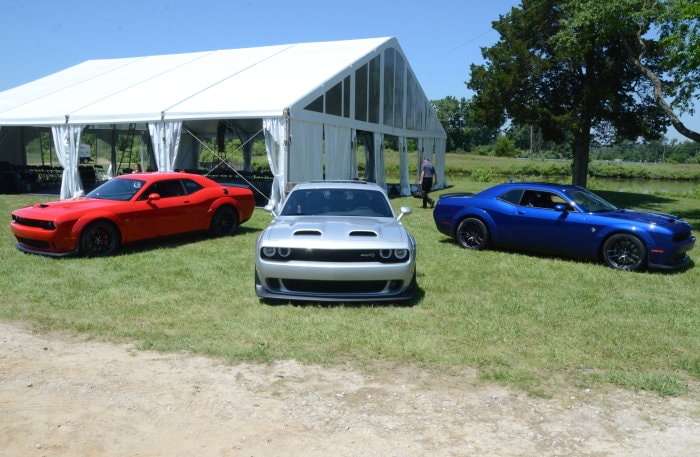 Dodge Challenger Gets All Sorts of Performance Improvements for 2019

Yesterday morning, FCA introduced a portion of the 2019 Dodge Challenger at a private media event at their Michigan proving grounds and once again, the new model year means more performance for the Mopar muscle car.
Advertisement

It goes without saying that Dodge is on a roll when it comes to offering new levels of performance from the Challenger. After offering the 840-horsepower, one-year-only Demon in 2018, the brand has rolled out a handful of performance increases for the 2019 model year including the 797-horsepower Challenger Hellcat Redeye. Of course, a full-production car with 797 horsepower is the biggest news for the 2019 Dodge lineup, but that wasn’t the only performance improvement made to the Challenger lineup for the upcoming model year.

Today, we take a look at the other changes for the 2019 Dodge Challenger.

Deletions and Alterations
Before getting into the high performance changes for the 2019 Dodge Challenger – a look at the vehicles that seem to have left the lineup for the new model year.

Of course, the 2018-only Demon is gone, but it appears as though the SRT 392 package has also been removed from the lineup. Replacing it is the R/T Scat Pack with the “new” Dynamics package and the optional adaptive suspension system. Also, the Shaker and T/A trim levels have seemingly become packages for the R/T and R/T Scat Pack, but it seems that those changes really don’t have any impact on the form of the vehicles – it is more of a reclassification system. My guess is that Dodge wanted to cut down on the number of trim levels for 2019, so they made some of 2018’s trim levels packages – but nothing has really changed in terms of the content availability with those models.

Also, unlike the 2018 lineup, where the Hellcat Widebody was its own trim level, the widebody is now a package that can be added to the Hellcat, the Hellcat Redeye and the R/T Scat Pack. When you load up the Scat Pack widebody, you effectively create an SRT 392 widebody, offering all of the handling and braking performance of the Hellcat widebody but with the 485-horsepower Hemi.

Now for the performance improvements for 2019.

Revised Scat Pack
First up, the 2019 Dodge Challenger R/T Scat Pack will still come with the 392 cubic inch Hemi with 485 horsepower and 475 lb-ft of torque, but for the new model year, it comes with the vented hood from the 2015-2018 Hellcat models. As mentioned above, the Scat Pack can now be ordered with the Dynamics package that introduces the SRT wheels and big Brembo brakes while the Hellcat’s adaptive suspension, but the biggest news for the 2019 Scat Pack is in the availability of the Hellcat’s widebody package.

For 2019, buyers will be able to order the 485-horsepower Challenger Scat Pack with the same widebody design as the 2018 Hellcat (shown above in red), including the front fascia, the hood, the wheel opening flares, the wider wheels and tires, the uniquely-tuned adaptive suspension and the big Brembo brakes. This package will lift the Scat Pack to all new levels of performance when it comes to road handling, all while maintaining a price well below that of the Hellcat.

Pricing has not been announced, but we can expect that even when loaded up, the Scat Pack widebody will be thousands less than the Hellcat.

Higher Performance Hellcat
Next up, the 2019 Dodge Challenger SRT Hellcat (above in blue) receives a new hood that feeds much cooler air to the engine and as a result, this package offers slightly more power for the new model year. To be exact, horsepower climbs from 707 to 717 while torque rises from 650 to 656 lb-ft.

In addition to the extra power, the 2019 Hellcat Challenger now features Launch Assist with Torque Reserve that allows the engine to build 3.9psi of boost prior to launch, yielding an increase of 55% on initial launch torque. The 2019 Hellcat also comes standard with the After-Run cooling system for improved cooldown efforts between track sessions and when preparing for a quarter mile blast, a standard Line Lock system makes burnouts easier on the rear Brembos.

Finally, cloth seats are now standard in the 2019 Hellcat, which I think will lead to a reduction in the base pricing as there is less standard premium equipment.

797 Horsepower and Full Production
Last but most certainly not least, we come to the biggest bit of American performance news for the 2019 model year – the Dodge Challenger SRT Hellcat Redeye (above in silver). This muscle car features the supercharged 6.2-liter Hemi from the Demon, but in this new model, the output is reduced to a still-lofty 797 horsepower and 707 lb-ft of torque due to changes in the air intake system. Helping put that power to the ground is the same driveshaft and rear axles that come in the 840-horsepower model from 2018, but the Redeye features the brakes, suspension and plush interior of the Hellcat.

On the outside, this model is just about identical to the 717hp Hellcat, with the exception of unique red-eyed badges and a new, optional rear spoiler. Really, shy of the engine, those driveline components and the badging, the Redeye is identical to the Hellcat in terms of physical components right up to and including the widebody package.

However, the Redeye has an even great performance advantage over the Hellcat thanks to the innovative SRT Power Chiller, which uses the air conditioning system to super-cool the intercooler system – leading to massive reductions in engine intake air temperatures. The Redeye also shares the Torque Reserve/Launch Assist system, the Line Lock system and the other go-fast goodies from the Hellcat, but the intercooler chiller system coupled with the added power from the larger supercharger makes the Redeye the most-powerful American production road car for 2019.

Dean McManis wrote on June 29, 2018 - 3:01pm Permalink
It is good news, but hardly shocking. The regular Hellcat gets the two nostril hood and an extra 10HP, the Scat Pack gets the widebody, and the Demon is essentially reborn as the Hellcat Redeye without the dedicated drag racer bits. The HP difference from the 808HP Demon (on regular gas) and the 797HP Redeye is inconsequential, but it will provide a more well rounded performer against Ford's upcoming GT500. No word on pricing, but I'm guessing that Dodge will split the difference between the $72K Hellcat widebody, and the $85K Demon for the Redeye package.
Dean McManis wrote on June 29, 2018 - 3:05pm Permalink
Also I am hoping that we see matching 797HP Redeye versions of the Charger and Trackhawk following this announcement.
Ricardo Aguilar wrote on June 30, 2018 - 5:39pm Permalink
How about a two door Charger with a HEMI American dream that would be bad ass I would take one like the 68 70 year