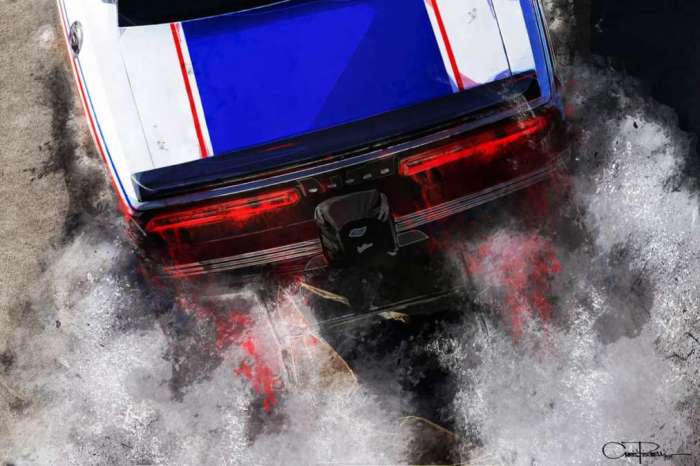 There are still no details on the mysterious Dodge Challenger that we saw last week, but the Mopar muscle car teased today by FCA appears to be a beast on the drag strip.
Advertisement

Last week, we brought you the first teaser image from the folks at Mopar, which was clearly a Dodge Challenger under a dark cover. There were no details accompanying that sole shot and that covered car led to a ton of speculation in the Mopar social media world. Today, Mopar rolled out their next attention-grabbers for the SEMA Show in the form of a video and a drawing of a red, white and blue Dodge Challenger. We don’t know for sure that the car in the picture above and the video below is the same car that was under the cover, but based on what we can see in that covered photo and in the video, it could be the same car. 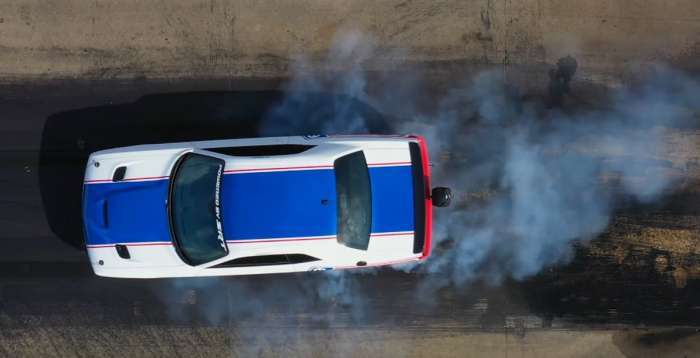 Dodge Challenger Burnout Video
In the video below, we watch from above as a red, white and blue Dodge Challenger does a big, smoky burnout on what appears to be the burnout box at a drag strip. From above, this looks like a Hellcat car based on the hood, but it has hood pins and it doesn’t have side mirrors. Coincidentally, the car under the cover from last week appeared to have a Hellcat hood with hood pins and it didn’t have side mirrors. 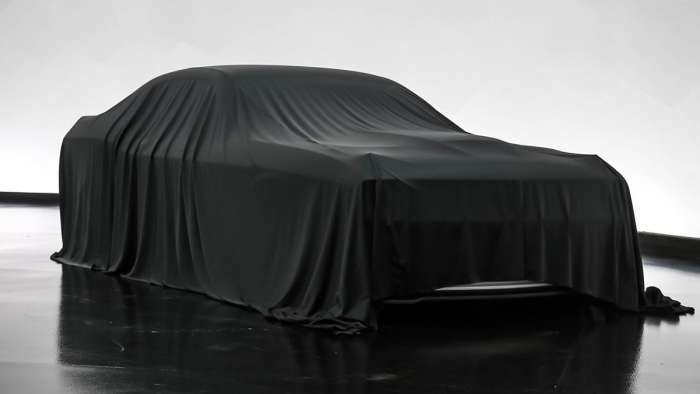 Is this the same car that was teased under the cover last week? We don’t know for sure, but this Dodge Challenger appears to be a track-purposed drag car. It appears to have Mopar logos on the rear quarter panels, so it would make sense that the muscle car doing the burnout could be featured by Mopar at the upcoming SEMA Show in Las Vegas.

Rear End Artwork
Finally, accompanying the video is the artwork showing what appears to be the same Dodge Challenger from the burnout video. We can see a parachute and a set of wheelie bars, so this car really seems to be another drag racing package, but we won't have the full details until tomorrow when the SEMA Show opens – nor do we know for sure that this is the same car that was under the cover in Mopar’s picture on Instagram last week.

However, it seems likely that this tire-slaying Dodge Challenger will be on display this week in Las Vegas.