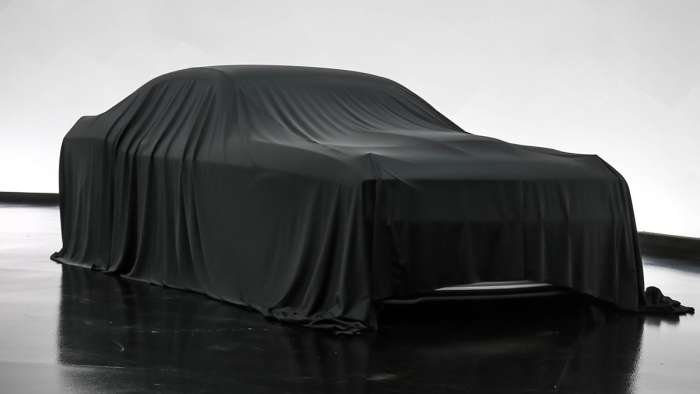 The 2019 SEMA Show starts next Tuesday and it looks as though Mopar will introduce a Dodge Challenger of some sort, although the picture of the covered car doesn’t offer many hints as to what we be unveiled in Vegas.
Advertisement

Earlier this week, we brought you an early look at the 2020 Ram Rebel Off The Grid Concept, which is slated to make its grand debut next week at the 2019 SEMA Show in Las Vegas. That Mopar-modified truck will be just one of the many vehicles on display in FCA’s huge area in the convention center, but shy of a classic Dodge D200 and a Jeep Wrangler, we don’t know what else to expect.

Thanks to the teaser image above, which was posted to the official Mopar Facebook and Instagram accounts, we know that there will be some variety of Dodge Challenger on display – but your guess is as good as ours in terms of what might be under the cover.

“Remember the fun we had at SEMA 2018? Wait till you see what we have in store for this year’s show.”

Many people in the world of social media believe that the reference to 2018 is a hint of what is under the cover and for those who don’t remember, last year’s show brought us the introduction of the 426-cubic inch, 1,000-horsepower Hellephant crate engine. That engine was introduced in a heavily modified 1968 Charger known as the Super Charger Concept.

The car in the picture above definitely doesn’t appear to be a Charger, so it doesn’t seem like it could relate to that, so perhaps this covered Challenger could involve the Hellephant crate engine, but again, we won't know for sure until next Tuesday.

What We Can See
If you examine the image above, the mystery car appears to be a Dodge Challenger with a hood scoop design that is similar to the T/A or Hellcat, a set of hood pins and a front splitter that looks a great deal like the piece on the front of the standard-width Hellcat Challenger. Along the sides, this definitely doesn’t appear to be a widebody car, so from the shape under the cover, this appears to be a standard body Challenger with a splitter and hood from the Hellcat model, and a set of hood pins that are probably from the Mopar catalog. Some folks online believe that the hood scoop portion of the hood appears to be taller than that of the Hellcat, but that is tough to tell from a single picture and really, no other key points of the car are available in this one-shot.

Ultimately, while we don’t know for sure what is under the cover, it certainly appears as though Mopar is bringing at least one Dodge Challenger to SEMA and if the last decade is to be used as an example, we would guess that whatever is under the sheet will prove to be pretty awesome.

Again, the 2019 SEMA Show starts on Tuesday, November 5th and Mopar has a press conference scheduled for 4:26 pm Vegas time, as they do every single year. The car under the cover in the picture above could be the big news, or it could be one of the many Mopar-modified machines on display at the massive show. As soon as we know more, you will find the details here on TorqueNews.