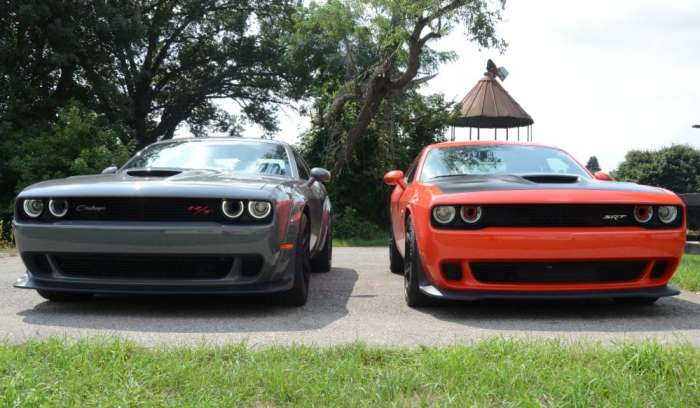 The Dodge Challenger continues its impressive sales climb, posting a 34% year over year gain in October and beating the slumping Ford Mustang to lead the sporty two-door coupe segment for the second time this year.
Advertisement

In October 2018, the Dodge Challenger sold more units than the Ford Mustang, allowing it to lead the muscle car segment. Some people will insist that the Challenger is a muscle car while the Mustang is a pony car, but semantics aside, the Challenger, Mustang and Camaro all compete in the same segment, whatever you want to call it. Unfortunately, Chevrolet doesn’t publish monthly sales numbers anymore, so we don’t have the Camaro numbers for October, but based on the sales numbers over the past year – the odds are very good that the Chevy didn’t outsell the Dodge or Ford.

In any case, whether you want to call them muscle cars, pony cars or anything else, the Dodge Challenger led all sporty two-door cars in October 2018 sales. I choose to call them all muscle cars; you can call them whatever you’d like.

October Muscle Car Sales
In October 2018, Dodge sold 5,225 Challengers, up 34% from the same month last year. Ford sold 4,924 examples of the Mustang, down 6% from October 2017, allowing the Mopar muscle car to lead the segment for the second time this year. Once again, as the Mustang sales dip, the Challenger – a car that is often criticized for not being refreshed recently enough – continues to post better and better numbers. That trend is likely to end sooner or later, but right now, the Challenger continues to power ahead while the competitors slump.

As mentioned above, we don’t have sales numbers for October for the Camaro due to GM’s move to quarterly sales reports, but with Chevrolet averaging just 4,425 Camaros sold over each of the first nine months of 2018, it is highly unlikely that Chevy outsold Dodge in muscle car sales.

For those wondering, through September, the Camaro was down 26%, so it comes as no surprise that Chevrolet is working to improve sales with a refresh or two.

Tim Vorick wrote on November 2, 2018 - 9:01pm Permalink
Bill Ford, the Coach, and the Board at Ford Motor Co. need to take a long look in the mirror. They will end up screwing up the Mustang as they have many other models in the past.
Jesse wrote on November 2, 2018 - 9:03pm Permalink
I have always considered, back in the 1960's, the Mustang, Camaro, Challenger, Cougar, Javelin, Firebird, Barracuda, and AMX to be pony cars. I use the term muscle car to describe the Olds 442, Pontiac GTO, Chevelle SS, Buick Grand Sport, Dodge Charger and the like. These were bigger cars with bigger engines, although some engines were shared between the two. The Buick GSX Stage 1 was one of the most powerful and least known muscle cars, at least when compared to the more popular muscle car nameplates. As a kid back in the late 60's and early 70's my brother and I had a Sunday ritual of cruising the car lots and checking out what was new since our last Sunday cruise. We spied this '70 Chevy Nova SS. Back then you could open the hood from the outside. We popped that hood and spied a 396 cubic inch V-8 with an open 360 degree air intake and chrome valve covers. That engine took up the whole engine compartment. A holy grail car for sure today. Now to my point....finally. The Challenger is pretty much like the original. Slab-sides with a conservatively styled front and rear ends. Look at the Camaro and Mustang, especially the front ends of these vehicles. Lots of curves. A busy look. Now look at the Challenger with it's graceful understated look. It's bragging rights are under the hood!
DeanMcManis wrote on November 5, 2018 - 1:54pm Permalink
My neighbor just bought a Hellcat. He got a great deal because the dealer was clearing out their inventory for the new RedEye Hellcats coming soon. They were also discounting a Trackhawk there. I am still hoping to see RedEye Trackhawk and Charger models announced.
Larry Husa wrote on November 7, 2018 - 12:18pm Permalink
I think some of the sales for the Challenger come from the fact that it is the only one of the three that has room. Room for people and cargo. More people want a car that can do many things well, not just a few.
DeanMcManis wrote on November 7, 2018 - 5:57pm Permalink
Yeah, the Camaro and Mustang are really 2+2 Ponycars, whereas the Challenger is a more practical car, seating 4-5 adults.
Kevin P. Brown wrote on December 10, 2018 - 3:41pm Permalink
Having owned a 2015 Hellcat until this summer I can honestly the Challenger is an excellent car. I think the Mustang is the best all around car in terms of looks, styling and performance and the Camaro is certainly the performance/handling/trackday superstar. Can't wait for my next Challenger Hellcat, but they are all very good cars in their own right.

Elon Makes a Cybertruck Statement With an Action, But Quiet in Words
Tesla's Record Month in China: Doubled Registrations in March 2021
END_OF_DOCUMENT_TOKEN_TO_BE_REPLACED