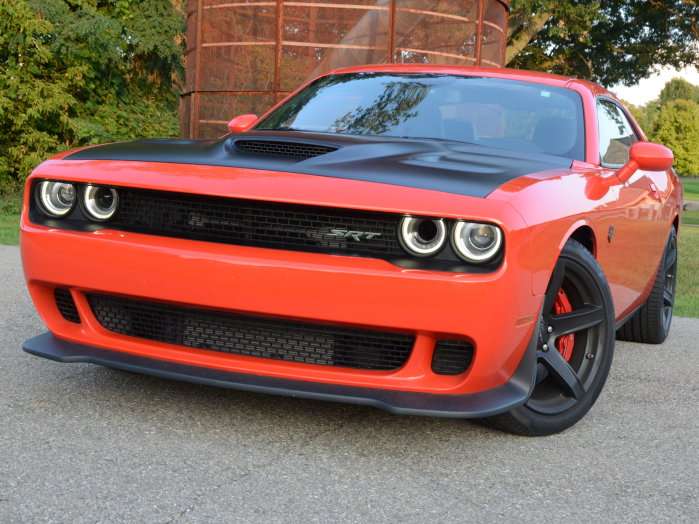 The sales numbers for February 2018 are in and the Dodge Challenger has comfortably outsold the Ford Mustang and the Chevrolet Camaro by a comfortable margin as muscle car sales begin to grow as spring nears.
Advertisement

Since the Chevrolet Camaro returned to the American muscle car lineup in late 2009, the Dodge Challenger has ranked third in monthly sales most of the time while finishing third in annual sales every year. However, since the refreshed Challenger was introduced for the 2015 model year, the high performance Dodge has seen sales numbers climb significantly. At the same time, Mustang and Camaro sales have dropped, allowing the Challenger to either lead the monthly segment sales race or finish second more in the past two years than it had in all of the years ahead of the refresh.

In looking at muscle car sales numbers from the past five years, February is often the beginning to the big climb in sales as Americans prepare for spring, but for the second month of 2018, the Mopar muscle car saw it sales numbers jump (compared to January) by a much greater amount then its cross-town competitors. As a result, the Challenger beat the Ford Mustang and Chevrolet Camaro by a comfortable margin, after finishing second to the Mustang in January.

Challenger Wins February
In February 2018, Dodge sold 6,093 examples of the Challenger. That is 14 less units than they sold in the same month last year, but it is 2,600+ units better than January 2018. Ford sold 5,800 Mustangs and Chevrolet sold 3,680 Camaros – both of which are up compared to January, but with the Challenger growing from month to month by the largest margin, the Dodge muscle led the segment in February 2018 sales.

While February 2018 wasn’t the best month for the Challenger, it was statistically better for Dodge than it was for Chevy or Ford. In the 8 years that I have been covering muscle car sales, last month was the worst February for the Mustang and the Camaro.

Mustang Leads the Annual Race
After leading the segment in January and coming in second in February, the Ford Mustang leads the early annual muscle car segment sales race. Ford has sold 10,532 pony cars so far this year, leading the Dodge Challenger in second with 9,498 units sold and the Camaro in third at 6,547.

Things are Bad for the Camaro
In January, the Chevrolet Camaro posted its worst monthly sales numbers since the model returned for the 2010 model year and February isn’t much better. In fact, since the Camaro returned to the lineup, 2018 was the worst year for February Camaro sales and when coupled with the record-low in January – the Chevy muscle car is off to its worst start of the modern era.

To put things into perspective, prior to the arrival of the 6th generation Camaro, the Dodge Challenger had only outsold the Camaro a few times in the past 7 years. In February, the Challenger sold 6,093 while the Camaro has moved 6,547 units on the year, so in one month, the Dodge was only 454 units behind the Chevy’s two-month total for the year.

Having driven the 6th gen Camaro, I find it to be much better than the previous generation and frankly, it shocks me that the new models aren’t selling better. With sales numbers being so low, the company is going to need to do something to move more muscle cars, presumably in the form of another refresh.

Soakee wrote on March 1, 2018 - 12:34pm Permalink
Although the Challenger was allegedly refreshed for 2015, it is difficult to tell that it has been changed since it returned to the market. The author of this article should have offered some explanation for the Challenger's sales success, given that it the oldest-looking of the three cars in it's category.
Patrick Lafleur wrote on March 1, 2018 - 10:59pm Permalink
I dont understand why à too much heavy car liké that with à so poor technology Can Beat à car liké thé Mustang in sale but that's all for thé camaro no look no prestige.
Manny wrote on March 3, 2018 - 11:23pm Permalink
Sorry but challengers heavier or not are still the best muscle car for your $ and we intimidate everybody
Adam C wrote on May 9, 2018 - 10:58am Permalink
Can you elaborate on the "poor Technology" remark? I thinks it rather good technology to get a 4,400 lb car to do 0-60 in 2.3 and a 1/4 mile in 9.65. Mustang claims they'll be able to do it, I believe they said 2020. And if weight is the biggest factor, throw a twin turbo in a Ford Fiesta and lets call that a sports car
Dave wrote on May 10, 2018 - 10:26am Permalink
I'm assuming you're an overhead cam Ford fanboy. Overhead cams is actually the older technology. Pushrods are actually the newer technology.
Kevin VonHacht wrote on March 2, 2018 - 12:37pm Permalink
There is a very simple answer. Most horsepower for the buck. Dodge also brought back the shaker model in 14/15.
Bubba Blue wrote on March 2, 2018 - 3:32pm Permalink
Camaro needs to be lighter still and a few $$ less..
Bink wrote on March 11, 2018 - 5:18pm Permalink
Its the lightest of the three American coupes and if GM were to go lighter it would cost more and if they wanted to reduce weight and reduce price they would have to reduce power.
anthony kolar wrote on August 12, 2018 - 3:07pm Permalink
When I'm 18teen I'mgoing to need a . camaro
E Canales wrote on March 3, 2018 - 1:39am Permalink
The Challenger can still 5 , has a large trunk and looks Good. For those of us who have children, these are important considerations.
Dave Schwarz wrote on March 3, 2018 - 9:55am Permalink
Pro tip: get a thesaurus and find some alternate words for “comfortable”. Or, just announce at the top of the article that it’s a drinking game. That’s cool, too.
Sam wrote on March 4, 2018 - 12:27am Permalink
I test drove the Camaro and was bothered with poor visibility from the side rear and front. Why don’t they improve the rear trunk opening? It is way too small.. these 2 concerns are why I have yet to buy one.
Don wrote on March 24, 2018 - 12:02am Permalink
I see a few reasons why the Challenger has moved to the top in this segment. Large dealer discounts, Advertising and it does gave a more usable interior then the Mustang and Camaro. I recently test drove a 2018 Hemi Challenger from my local Chrysler dealer where I had purchased cars from. It was fast and roomy. I found it old school inside and out. Not a lot of tech. Had a big sticker but a sizable discount. My local Ford dealer where my wife and I recently purchased a 2017 Edge Sport and 2017 Escape gave me a new 2018 Mustang GT with Performance pack to use from Fri-Mon. I did not want to return it. This car is fast, loud and the new 10 speed was amazing. Loved the accelerator blimps on down shifts keeping the RPMs in the power band. The front seats were comfortable and unlike the Camaro, you can see out of it. Regarding the back seat. Well if you have short kids, maybe. This really is a two seat car. I didn't negotiate price with either dealer. I just want to sample these cars for future considerations. I think Fiat/Chrysler is really marketing the Challenger better then Ford and GM are doing for the Mustang and Camaro. I also feel that Fiat/Chrysler is offering higher discounts to move the Dodge brand. Like Ford announced. They are becoming a truck, Suv company. For a everyday use, great engine, performance, some old school mixed in, and especially if you need a some what useable rear seat with a great price discount. The Challenger is the car. Unlike the Mustang and Camaro. I could live with this car year-round. It you want a car that handles like a Sports car, turns heads, great tech options, sounds really nasty and only has two useable seats. The Mustang is the car. I need to add. Not great for use on wet or snow covered roads since the performance package includes summer tires. My personal ranking from test drives, excluding the Camaro. Mustang GT, Challenger and Camaro They are all strong Muscle cars, but I feel the Mustang and Camaro have become sports cars.
Robert McMahon wrote on June 2, 2018 - 9:58pm Permalink
Very simple. Go to the various sites and build comparable cars. Then check out the lease rates. Dodge is always $50-$70 less per month. Additionally, Dodge has some real depth in models. Without question, Mustangs and Camaros out handle the Challengers. But Challengers are roomy, well styled, and super comfortable. I lease one and am about to lease another. Won't even bother to test drive the others.