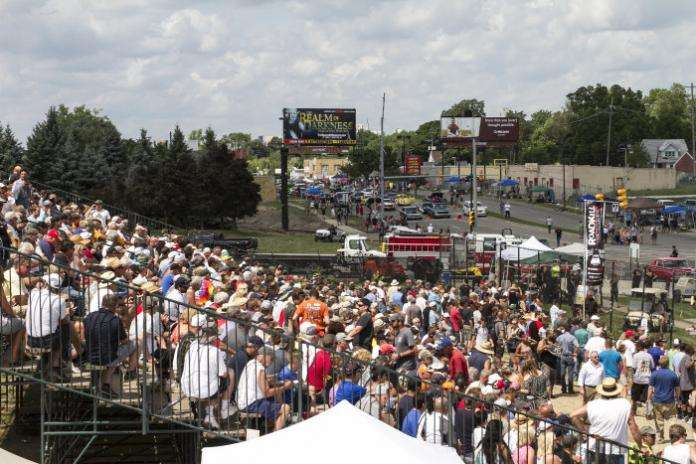 FCA announced today that for the second year in a row, Roadkill Nights Powered by Dodge will sponsor legal street racing on Detroit’s Woodward Avenue along with a massive automotive festival at the M1 Concourse grounds which border the temporary race track on Woodward.
Advertisement

For the 3rd year in a row, a Roadkill Nights Powered by Dodge event will be held in Detroit in August and for the 2nd year in a row, this incredible event will include legal street racing on Detroit’s Woodward Avenue. After the first Roadkill Nights Powered by Dodge in Detroit was held at the now-defunct Pontiac Silverdome back in 2015, the event moved to the M1 Concourse along Woodward. The move to the M1 Concourse offered more functional space for things like thrill rides, Dodge displays, live music, a huge car show and a big spread of food trucks, but more importantly, the move to M1 Concourse allowed Dodge to work with the local authorities to go drag racing right on Woodward Avenue.

The legal street racing was, of course, a big hit and for 2017, Roadkill Nights Powered by Dodge is back at the M1 Concourse for more of the same.

“Continuing the Dodge brand's efforts to take racing off the streets and to a professionally run strip, there is no better way to kick off Detroit’s annual cruise week than to have a pure enthusiast event like Roadkill Nights Powered by Dodge,” said Tim Kuniskis, Head of Passenger Cars, Dodge, SRT, Chrysler, and FIAT, FCA – North America. “This event is also the perfect opportunity to show muscle car enthusiasts from around the world the new 840-horsepower Dodge Challenger SRT Demon where it was born to dominate – on the dragstrip.”

The main attraction of the Roadkill Nights Powered by Dodge event is, of course, the 8th mile drag racing action on Woodward Ave, but behind the grandstands running along the “track” is one of the most exciting automotive festivals in the US. Spectators will enjoy the dyno area, the car show area, exhibitions from the Roadkill show, live music, a family area with rock climbing walls and inflatable slides, food and drinks (for purchase) and the free Dodge Thrill Rides in the Dodge Challenger SRT Hellcat, the Dodge Charger SRT Hellcat and the Dodge Viper. Of course, there will also be plenty of Dodge-focused displays, giving spectators a chance to check out all of the latest and greatest Dodge products up close.

Oh, and we can expect to see some live action with the 2018 Dodge Challenger SRT Demon in addition to a virtual drag racing display.

Spectator admission is $10 for the 2017 Roadkill Nights Powered by Dodge event for most people while residents of Pontiac, Michigan get in for just $5 and kids under 12 are free. The event runs from 11am through 11pm, with racing and Thrill Rides ending at 9:30pm. Drag racing registration information and costs haven’t been announced yet, but with the event about 7 weeks away – that information should soon be available as well.

Elon Makes a Cybertruck Statement With an Action, But Quiet in Words
Tesla's Record Month in China: Doubled Registrations in March 2021
END_OF_DOCUMENT_TOKEN_TO_BE_REPLACED