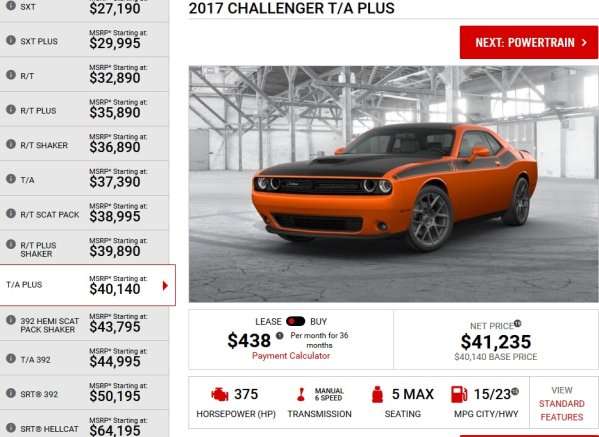 After reading some of the comments on my piece where we looked at the build page for the 2017 Dodge Challenger T/A, I thought that it might be time to put together a piece detailing the many trimlines of the newest Challenger, as more than a few people who read that build-and-price piece on the new T/A aren’t sure where it fits into the lineup – or which trimlines are available for the new model year.
Advertisement

The Dodge Challenger is the most powerful muscle car ever, the quickest muscle car ever and, I believe that the 2017 version has more trimlines than any muscle ever – at least from the modern era. There are now 13 trimlines available on Dodge.com and that doesn’t include the race-only Drag Pak (which has not yet been announced for 2017), which has seemingly created some confusion in the online muscle car community. Some people believe that the new T/A packages replaced other packages while others don’t have any idea how the Scat Pack or T/A models differ from the R/T or SRT 392.

With all of that in mind, I have put together this piece, detailing the many trimlines currently available for the 2017 Dodge Challenger – outlining the key features of each, along with the pricing. As you will see, these trimlines are arranged by engine, as that seems to be the simplest way to dissect the elaborate Challenger family.

The 2017 Challenger SXT is the true base model, with the 305 horsepower Pentastar V6, a standard 8-speed automatic transmission, the simpler UConnect 5.0, 18 inch wheels, cloth seats and all of the basic features that come with every new car (power windows, AC, etc). This model has an MSRP of $28,285, including the destination fee and the seemingly unavoidable upcharge for a spare tire.

The 2017 Challenger SXT Plus has the same drivetrain bits, but the Plus package adds the premium UConnect 8.4 inch infotainment system, satellite radio, rear park assist, silver interior appointments, 20 inch wheels and – most importantly – heated and cooled Nappa leather performance seats. The Challenger SXT Plus starts at $31,090, including the destination fee.

The 2017 Dodge Challenger R/T is the least expensive Hemi-powered model available and other than the powerful engine, the R/T package is similar to the base Challenger SXT. The R/T package includes similar cloth seats, the small UConnect 5.0 setup, power windows and all of the basic niceties – along with a simple 20 inch wheel. This package starts at $33,985 with destination.

Next, the 2017 Challenger R/T Plus comes with the same drivetrain bits as the R/T, but the R/T Plus also has unique 20 inch wheels, the premium UConnect 8.4 system, satellite radio and the heated/cooled Nappa leather performance seats. This package starts at $33,985 with destination.

The 2017 Challenger R/T Shaker is comparable to the Challenger R/T with cloth seats and the UConnet 5.0 system, but the Shaker package adds the wicked Shaker hood, unique 20 inch wheels, a black fuel door, a gloss black grille insert, a rear spoiler and Shaker graphics. The MSRP of the R/T Shaker $37,985 with destination and the manual transmission.

If you want a little more luxury out of your 5.7L Hemi-powered Shaker car, you can step up to the 2017 Challenger R/T Shaker Plus, which comes with the upgrades of the Shaker package, along with heated/cooler Nappa leather performance seats and the UConnect 8.4 system. This classier Shaker car has an MSRP of $40,985 with destination.

New for 2017 is the Challenger T/A. This is a budget performance package based on the Challenger R/T, adding dual “air catcher” headlights similar to the one found on the Hellcat Challenger, a stain black hood from the Challenger SRT 392 with a functional hood scoop that feeds air into the engine bay via a cold air intake kit, 20 inch black Mopar wheels, Goodyear Eagle F1 tires, a satin black fuel door, a satin black rear spoiler, the satin black T/A stripes on the sides of the car and the Super Track Pak – which adds a high performance Bilstein dampers with ½ inch lowering springs, performance brakes and a three-mode electronic stability control system with a full-off setting. This new Challenger T/A has a starting price of $38,485 including destination.

Finally, if you love the look of the new T/A, but you want a little more interior comfort, there is the 2017 Challenger T/A Plus. As is the case with the other “Plus” packages, the T/A Plus gets the heated and cooled Nappa leather seats, the UConnect 8.4 system, the Dodge performance leather steering wheel and a 6-speaker sound system. The 2017 Challenger T/A Plus has an MSRP starting at $41,235 with destination.

The 2017 Dodge Challenger R/T Scat Pack looks similar to the Challenger R/T, but the Scat Pack trimline adds the 392 cubic inch Hemi with an extra hundred horsepower along with unique wheels, a new front and rear spoiler, sport tuned suspension and the UConnect 8.4 system. This package offers the most bang for your buck in the muscle car segment, with a starting MSRP of just $40,090 including destination and Gas Guzzler Tax.

Next, if you love the look of the modern Challenger Shaker, but you want more power than you can get from the 5.7L Hemi, there is the 392 Hemi Scat Pack Shaker, which includes the features of the Shaker package and the features of the Scat Pack package – all wrapped into one beautiful, high performance muslcle car. This package starts at $44,890, including destination and gas tax.

Finally, we have the 2017 Dodge Challenger SRT 392, which includes the 392 Hemi V8, but the SRT package adds a spread of high performance goodies including the big Brembo front and rear brakes, the adaptive suspension that is shared with the Hellcat, unique 20 inch wheels, a hood with a front-mounted hood scoop, the aggressive front fascia and a loaded interior – with leather heated/cooled seats, a flat bottom steering wheel and the premium UConnect infotainment package. The SRT 392 is essentially a Hellcat Challenger with the 392 Hemi, and you can get all of those performance and appearance upgrades with an MSRP of $51,290.

The Hellcat
Last, but most certainly not least, we have the 2017 Dodge Challenger SRT Hellcat. This monster muscle car comes with a loaded interior, a unique exterior design and the 707 horsepower, supercharged Hellcat Hemi – making it the most powerful muscle car ever. Just like 2016, the 2017 Hellcat Challenger has an MSRP of $65,290, including destination and gas tax.