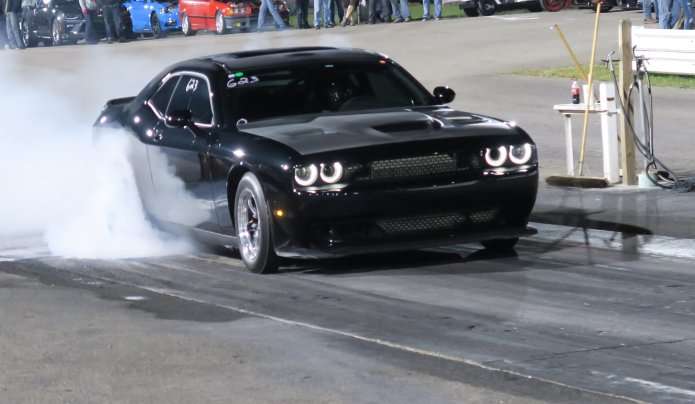 Last month, we brought you the news of David Crockett’s 2009 Dodge Challenger SRT8 setting the record for the quickest quarter mile time for a modern Mopar with a clutch-controlled manual transmission, but this past weekend, Crockett and his street-driven Challenger smashed his own record – laying down a 9.28 at 151.98 miles per hour.
Advertisement

Crockett Goes 9.28
After setting the traditional manual transmission Dodge Challenger record with a 9.55 and 9.53 last month, David Crockett went back to the track to see if he could run a quicker time. He made some suspension tweaks and adjusted the throttle a bit, but he didn’t make any component changes from when he ran 9.50s before heading to Keystone Raceway this past weekend. Crockett hoped to go quicker and the cool air in the Pennsylvania would cater to that, but even he didn’t expect such stunning results.

Crockett’s supercharged Dodge Challenger SRT8 ran a 9.28 at 151.98 miles per hour, with a 1.373 60-foot time and in the 8th mile, he ran a 5.98 at 118.36 miles per hour. That 9.28 quarter mile is a quarter of a second quicker than his previous record, putting a gap between himself and the next closest competitor in the battle of the world’s quickest quarter mile by a modern Challenger with a clutch-operated manual transmission.

Best of all, he got video of the run and you can watch his street-driven Challenger set the record at 9.28 below.

Finally, for those wondering, the Dodge Challenger SRT Hellcat of Leon Epling which we reported set the Hellcat quarter mile record a few months back has a manual transmission, but it has a specially prepared racing transmission which does not require the clutch to get from gear to gear while Crockett’s car is shifted like your average manual transmission car.

Chuck Luckenbaugh wrote on November 20, 2017 - 12:37pm Permalink
What size tires and wheels was the hellcat running??