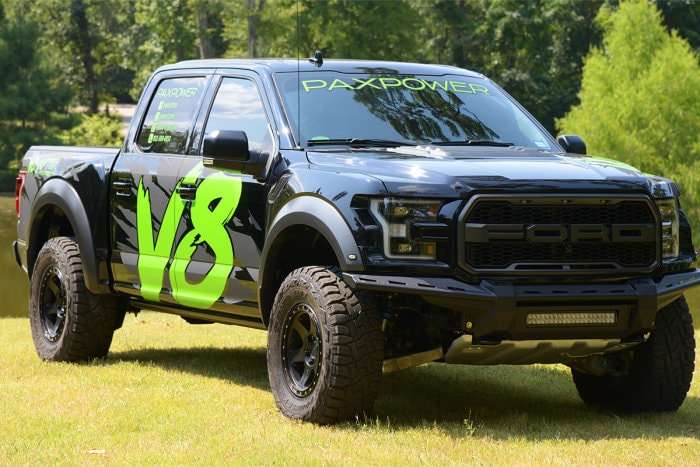 PaxPower of Houston, Texas has put together a package that transforms any V8-powered F-150 from the current generation into a 758-horsepower Raptor, including all of the Ford production components, for just $37,400.
Advertisement

The modern Ford F-150 Raptor is an awesome machine, unrivaled in the half-ton segment when it comes to performance on the road and off. While it is designed to dominate any off-road driving situation at high speed, the 450 horsepower, 510lb-ft of torque from the 3.5-liter EcoBoost V6 makes the Raptor the strongest half-ton truck in America – meaning that it is pretty quick on the road as well.

Even though the Raptor with the EcoBoost V6 is unchallenged as being the most capable performance truck sold in America, there are some Ford fans who demand the rumble of a V8. Unfortunately, demanding the V8 means that you can’t get a Raptor from the factory with your preferred engine, but that is where PaxPower comes into play.

This Texas-based company has developed a conversion kit that transforms any 2015-and-newer F-150 into a Raptor, complete with all of the suspension and body parts that make the production Raptor so impressive.

PaxPower Raptor Conversion
Seeing the demand for a V8-powered Raptor, PaxPower put together a package that incorporates all of the components of the standard Raptor into non-Raptor trucks with the 5.0L V8 enigne.

The first package adds all of the Raptor suspension and chassis components, including the Fox internal bypass shocks, the upper and lower control arms, the unique springs, CV axles, tie rods, brake lines, leaf spring pack, bump stops and hardware from the production Raptor. These parts have an MSRP of $6,500, but PaxPower charges only $7,450 for the installation and that includes Ford/Motorcraft 24-month warranty.

Next, if you want your V8-powered Ford F-150 to look and feel like a Raptor, PaxPower has their full conversion package. This includes the suspension and chassis bits mentioned above, as well as the fenders, hood, bedsides, grille, fender flares and trim pieces from a stock Raptor, applied to your non-Raptor and painted to match your F-150. This package also includes the Raptor bumpers and skid plates, but there is no mention of the stock wheels, so you may have to provide your own wheels. This package costs $24,950, including installation at the company’s Texas headquarters.

Finally, if you want your V8-powered F-150 to look and handling like a Raptor, while packing far more power than almost anything on the street, PaxPower offers the Supercharged Conversion. This package adds a 2.9-liter Whipple supercharger, a 132-mm throttle body, a huge air-to-water intercooler with a two gallon water tank, an enlarged heat exchanger with an electronic pump, a high volume oiling system and the tune needed to create 758 horsepower. This package is independent of the other two and costs $12,450.