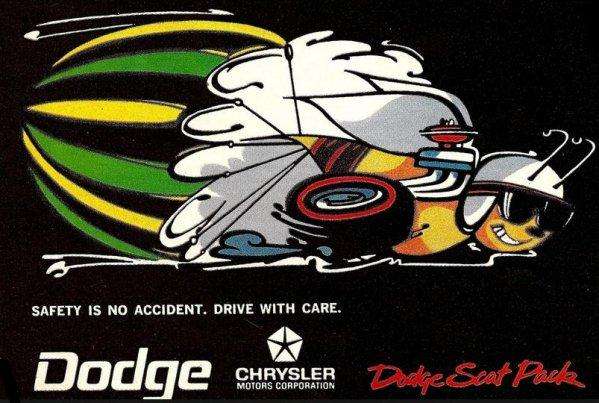 The Chrysler Group has re-registered the trademark for the Scat Pack name – leading to a rampant rumor that the Dodge brand could bring back the Scat Pack program for their performance models with features that range from a monthly newsletter to specially designed go-fast component packages.
Advertisement

Automakers register trademarks of names all of the time that never result in anything so for the Chrysler Group to trademark the Scat Pack name might not mean anything but according to Automotive News, Dodge brand CEO and President Tim Kuniskis stated that the Scat Pack "is a very important part of our history. We like the whole idea of having a Scat Pack of cars."

While this is exciting news to those familiar with Dodge and Chrysler Group history, the reinvention of the Scat Pack may not mean much to those who aren’t familiar with the program from the late 1960s and early 1970s. Below is a quick rundown of what the vintage Scat Pack program included and if the company is to bring back the option for Dodge brand enthusiasts – I would expect the modern Scat Pack program to be very similar.

The Scat Pack was introduced for the Dodge brand back in 1968 and included in the list of Scat Pack vehicles were the best known performance cars from within the Dodge brand. The Charger R/T, Coronet R/T, Coronet Super Bee, Dart GTS and Dart Swinger 340 were included in the program that first year and while there were no performance modifications, select Scat Pack cars featured twin bumblebee stripes around the tail of the car along with the unique Scat Pack decals on the cars. These vehicles were featured together in print ads and marketing brochures that featured bright, exaggerated cartoons of both the cars involved and the sporty little wheeled bee that was the Scat Pack logo (as shown above). There was also company apparel sporting the Scat Pack logos and the high performance Mopar muscle cars included in the program.

The Scat Pack program continued unchanged for 1969 but in 1970, there was an expansion of the program to include the new Dodge Challenger and the high performance Charger Daytona. 1970 also saw the launch of the a national Scat Pack club populated by hardcore Dodge go-fast fans that included a newsletter, a free Direct Connection catalog (now Mopar Performance parts catalog) and access to unique Scat Packages consisting of different types of Mopar goodies. Club members got the aforementioned catalog, two different newsletters (one monthly, one quarterly), a club patch, a membership card, a bumper sticker and a 40 page guide to racing – all for a price of just $3 per year. As for the Scat Packages, owners could opt for something as simple as the Showboat dress up kit or something as elaborate as the Bee-Liever package that added an intake manifold, a performance carburetor, a performance camshaft and high flow exhaust headers – which would obviously increase the performance of the car being modified quite a bit.

In short, the vintage Scat Pack program allowed Dodge owners and fans access to a club of like-minded individuals who were kept abreast on the latest Dodge racing news from the likes of NASCAR and the NHRA. The majority of the vehicles included in the original Scat Pack are now back in the Dodge lineup with the exception of the Coronet but with the Dart, Charger R/T, Charger Daytona and Challenger all being back – Dodge could put together a modern Scat Pack program to include those sub-SRT models at a low cost that would help to drive enthusiasm for the brand.