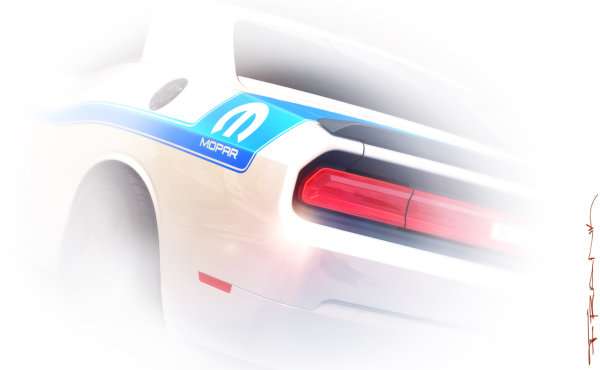 The Chrysler Group has just released the first “teaser” of the Mopar 14 and while the past Mopar branded performance cars were a bit of a mystery ahead of their debut – it is very clear that the Mopar 14 will be based on the 2014 Dodge Challenger.
Advertisement

When Chrysler’s Mopar performance parts division introduced its first branded vehicle back in 2010, the Mopar 10 was based on the 2010 Dodge Challenger R/T. Mopar will use the upcoming 2013 SEMA Show in Las Vegas to introduce the fifth installation in the Mopar branded performance car lineup but thanks to the teaser image shown above – there is no question that the Mopar 14 will also be based on the Dodge Challenger. We can speculate that the Mopar 14 Challenger will be based on the mid level R/T package with the 5.7L Hemi providing the power while Mopar performance accessories like a cold air intake, cat back exhaust system and perhaps some suspension goodies will help to improve performance.

The last bit of information on the Mopar 14 Dodge Challenge offered by this first teaser image is a smattering of black trim on the low profile rear spoiler, around the taillights, on the Mopar gas door and it looks like this Challenger package might feature black wheels. Chrysler loves using black chrome trim and I would bet that the wheels, gas door, the grille and maybe even the exhaust tips will be black chrome. Finally, the Mopar 14 Challenger will most likely pack a loaded interior package with unique leather clad seats, a Mopar shift handle, a serial number plaque, Mopar door sills and other Mopar branded goodies.

The decision for Mopar to use the Dodge Challenger again comes as a bit of a surprise as the Chrysler Group has shown off Mopar modified versions of the Jeep Wrangler and the Ram 1500 with similar modifications and the same black/blue paint scheme as the Mopar branded lineup. This led many enthusiasts to expect either a Jeep or Ram-based Mopar 14 so while some enthusiasts will be disappointed – I don’t have any doubt that the Challenger-based Mopar 14 will sell out in a hurry.