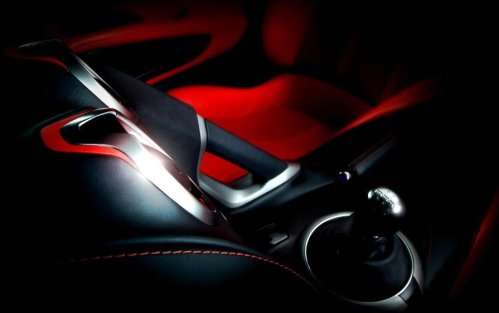 The new 2013 SRT Viper is set to debut at the 2012 New York Auto Show in less than a week but the folks at the Street and Racing Technology division have offered up our first look at the interior of the new American supercar as a part of the series of teasers leading up to the big debut.
Advertisement

Like the other 2013 SRT Viper teaser images, this picture doesn’t show us very much but it offers enough to wet the whistle of those patiently waiting for the next chapter in the great American supercar. This image, which may actually be artwork rather than a photograph, offers a shadowy look at the seat base, the door panel, the upper dash area, the shifter and lots of black leather trimmed with contrasting red stitch work from an angle that looks to be captured from the vantage point of a camera perched atop the gauge cluster – shooting downwards towards the base of the passenger side seat. One key item that we have not seen in previous Viper models is the “oh crap” handle finished in silver and black that is clearly visible in the middle of the image on the right; giving the passenger something to grab onto when riding along for spirited romps in the new Chrysler supercar.

First and foremost, this new 2013 SRT Viper interior teaser shows that the new Viper will be fitted with a proper 6-speed manual transmission controlled by a short throw shifter and finished with a look similor to previous generation Viper models. This includes a circular shift housing in silver with a silver shift knob, connected by a leather shift boot. There is also a black portion of the silver trim ring which could be a button – possibly the button to disable the traction control system promised by the Chrysler Group since the new SRT Viper was first discussed over 18 months back at the 2010 LA Auto Show. There was some speculation that the 2013 SRT Viper could receive a dual clutch transmission (that’s an automatic, usually with paddle shifters) but this image confirms that the new Viper will indeed sport a manual transmission.

The area that plays home to the shifter also has an emergency brake handle wrapped in black leather, stitched in red and finished with a chrome button. If you follow the e-brake handle forward, there is what looks to be another button near the base of the “oh crap handle” that could be another control button, perhaps another location for the disabling button for the traction control system but it could also be related to any of the other various electric systems in the 2013 Viper ranging from the stereo system to the door locks and windows.

Next, we can see that the 2013 SRT Viper will pack loads of leather with what looks to be black leather (be it real or faux) along the dash and around the twin central air ducts mounted high on the dash. These vents are trimmed in silver rings with red accents with the black leather making appearances throughout the interior, including the center console and the “oh crap handle”. In addition to the red accents on the seats, door panels and around the HVAC vents, we can see lots of red stitching contrasting against the predominantly black interior.

Not surprisingly, the 2013 SRT Viper interior teaser looks to offer our first glimpse at race inspired bucket seats with very deep lower portions to keep the passenger (and likely the driver) well rooted during stints or spirited driving. The seats sport a mostly red base with red bolsters on the seatback with a black center area. That red and black theme is continued from the seats into the door panels, where the armrest looks to be finished in red while the buttons and various openings are all black based on what we can see in this sole interior image.

The teaser image of the 2013 SRT Viper interior joins previous teasers of the American supercar. The first teaser offered a look at he front end (click here for that front end teaser) while the second official company teaser gave us a look at a mystery vent, which many believe to be found on the large Viper hood (click here for a look at the vent teaser). Technically, many believe that images of the new 2013 SRT Viper Hot Wheels diecast toy car introduced the world to the new Viper (click here for a look at the Viper Hot Wheel) but we wont know for sure how much the toy looks like the real thing until the 2013 Viper is unveiled next week.

The 2013 SRT Viper will make its grand debut next week at the 2012 New York Auto Show and you can rely on TorqueNews.com to bring you all of the details on the newest chapter in the history of the original American supercar.

Toyota's First EV Will Have a Name of BZ: Toyota BZ
First Videos From Inside The Boring Company's Las Vegas Loop
END_OF_DOCUMENT_TOKEN_TO_BE_REPLACED