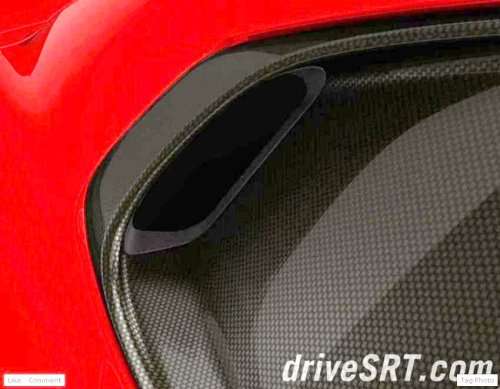 The Chrysler Group has dropped the newest teaser image of the upcoming 2013 SRT Viper but unfortunately – this image shows far less than the first shot we got a few weeks ago.
Advertisement

The newest teaser image of the 2013 SRT Viper is a super close up shot of what appears to be a carbon fiber air inlet but the shot is so tight that it is very hard to tell exactly what it is. We have enhanced the image to bring out the details of the darker areas. The most likely possibilities are that this is an engine air intake, a cooling intake for the engine bay, a cooling intake for the braking system or an opening designed to simply get fresh, cool air into the engine bay.

Due to the orientation of the new 2013 SRT Viper teaser image, it looks at first glance that this is probably an opening along the side of the new Viper. The likelihood of the new supercar having a flat surface like that along the front end is basically nil and with the angling of the opening, it looks as though this is something that you would find along the side of the Viper – perhaps as far forward as where the front fascia wraps around to the side of the vehicle with this opening helping to cool the Viper’s high performance braking system. This same thought could be applied if it were located further back on the new Viper, helping to cool the rear braking system.

The chances of this carbon fiber intake being located on the front end of the 2013 Viper are very slim but perhaps it could be a super close up shot that hides the actual orientation of the opening on the vehicle (that is one idea that I doubt – but anything is possible). Some of those SRT fans discussing this image on the internet are suggesting that it is an air intake mounted high on the greenhouse of the car, similar to an air intake on a mid engine vehicle but with the Viper most likely sticking to the front engine design – there wouldn’t be much use for a rear window-area intake.

One aspect that few people have considered is that this 2013 Viper teaser image could be a downward angle of a portion of the hood. From the early days of the Dodge Viper, the American supercar has had a variety of different openings in or on the hood to allow improved cooling, improved air flow into the engine or both. Perhaps this new carbon fiber intake is flat on the hood of the 2013 Viper with the opening providing cooling air or engine intake air; working with the large front mounted intake port shown in the first shadowy teaser that we got in late January (click here for a better look at the first 2013 Viper teaser).

Right now, all that we can do is speculate as to what this new 2013 SRT Viper teaser might be showing us as we eagerly await the next generation Viper’s formal introduction at the New York Auto Show in early April. What we do know is that the 2013 SRT Viper will include traction control and it could offer power in the range of 650-700 horsepower from a new version of the infamous Viper V10.

Needless to say, TorqueNews will continue covering the slow strip tease of the 2013 SRT Viper – bringing you any news as it becomes available!