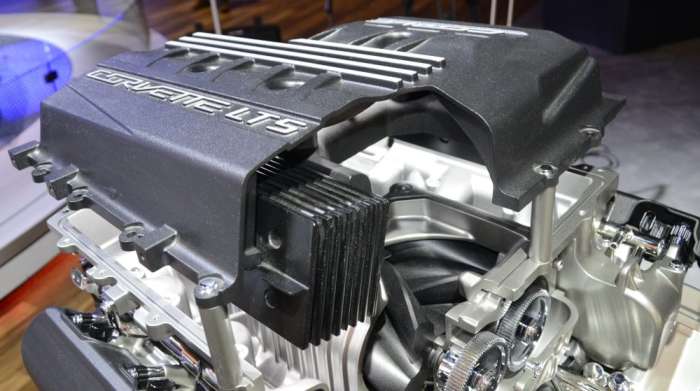 General Motors announced at the 2018 SEMA Show in Las Vegas that the LT5 engine from the C7 Corvette ZR1 will be available as a crate engine from the company’s performance parts division and with the first orders being taken for the 755-horsepower V8, we know how much it costs.
Advertisement

It didn’t come as a huge surprise when Chevrolet announced that the Corvette ZR1’s LT5 would be offered as a crate engine option from GM Performance Parts. GMPP has been quick to offer pretty much every key road-going engine in crate form, along with offering install packages that make swapping a modern engine into a classic muscle car simple and easy.

With the introduction of the LT5 crate engine, the combination of 755 horsepower and 715 lb-ft of torque can be added to any project car, but we didn’t know how much this premium engine swap would cost until now. GMPP has started taking orders for the LT5 crate engine, but it doesn’t come cheap, carrying an MSRP of $19,995.

LT5 Crate Pricing
Fortunately, GMPP is running a special price right now of “just” $17,915 and as other outlets begin selling these LT5 crate engines, we could see pricing vary a bit. For the time being, if you want to swap an LT5 into your 1s gen Camaro, it will cost you around $20,000 before any of the electronics, the mounts, the transmission or any of the other items needed to make the LT5 fit in your project car, so it is expensive, but the power and “wow factor” are hard to dispute.

In the coming months, GMPP will begin offering up a plug-and-play wiring setup and a unique 6L80 automatic transmission to make the LT5 swap easier, but right now, it seems that buyers will have to handle all of the installation headaches on their own. That is a problem for those folks looking for a simple, big-power swap, but for those skilled builders who are only interested in the engine itself – you won’t be waiting much longer once you make your $20,000 payment for the engine.

For those wondering, the closest comparison to the LT5 crate engine is the HellCrate Hemi from Mopar. That engine offers 707 horsepower and 650 lb-ft of torque with an MSRP of $19,530, so in terms of cost, the LT5 is in the same basic ballpark as the other monster-power motor in today's market.