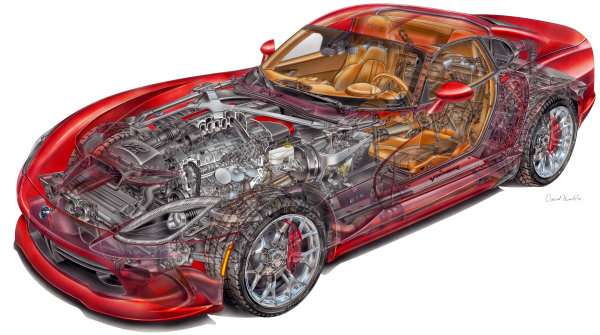 The Challenger's Hellcat Could be the First Viper V8 Engine

Since the Dodge Viper was introduced in the early 90s, it has been powered by a V10 engine because the levels of power offered by that 10 cylinder mill weren’t available in a 50-state street legal V8, but with the introduction of the 600+ horsepower Dodge Challenger SRT Hellcat – the new blown V8 could prove to be a proper V8 for the Mopar supercar.
Advertisement

The V10 Legend Introduced with Help from Lamborghini
When the Dodge Viper was introduced in the late 1980s as a concept car, the Chrysler Group was still working in cooperation with Lamborghini so when the Chrysler team needed an engine for their new sports car, they turned to one of the best known performance car companies in the world. The Lamborghini team took two Chrysler 360 cubic inch van engines, cut two cylinders off of one block and four off of the other and then welded together the remainder – creating the engine block for the first Viper V10.

The V8 Catches Up to the V10
Over the years, a great deal has changed in the world of high performance cars and while the Viper’s V10 engine has generally maintained at least a small lead over other performance engines from the American automakers, the supercharged 5.8L V8 from the Ford Shelby GT500 Mustang packs 662 horsepower and the C7 Corvette Z06 packs 650 horsepower and 650lb-ft of torque. If nothing else, those two engines show that you can make a street friendly and street legal V8 that will comfortably build the stock power of the Viper V10.

When the gap between the Viper V10 and the most powerful V8 engines in the American performance car segment first got smaller, many fans and critics of the Viper suggested that Chrysler should look to replace the V10 for a smaller, lighter Hemi V8. The problem at that time was that the Chrysler Group didn’t have a Hemi that would pack the power of the V10 while still being production friendly and legal in all 50 states. With the introduction of the supercharged 6.2L Hellcat Hemi, the company now has a V8 that will make at least 600 horsepower and while official numbers haven’t been announced – this is by far the closest that the Chrysler Group engines have ever gotten a V8 to match the Viper V10 numbers. While the difference between the already lightweight 8.4L V10 and the supercharged 6.2L V8 might be minimal due to the various components that go into a modern supercharging setup, this physically smaller engine could play a part in improved handling while also likely being more fuel friendly.

The Company has to do Something to Compete with the Z06
Now that we know that the 2015 Chevrolet Corvette Z06 will pack 650 horsepower and 650lb-ft of torque, the Chrysler Group engineers will have to do something to 1-up the newest super-Vette. The SRT team might have a hard time easing more power out of the Viper’s V10 engine without compromising drivability and should that be the case, the Hellcat Hemi – or a new supercharged V8 engine based closely on the Hellcat – could be the answer. With help from their new parent company Fiat, who also owns Ferrari, the Chrysler Group could use supercar technology to help build even more power from the supercharged V8 and for the first time, there could be a factory Hemi-powered Dodge Viper that packs more punch than any V10 beast before.

Of course, they could add forced induction to the current V10 engine family in the future Dodge Viper, but that adds more weight to the front end of the car. The engineers could also increase the displacement of the V10 engine to yield more power, but then you could be pushing the boundaries of fuel efficiency and engine emissions – which are both important factors in the global performance car market even though those factors likely don’t play much of a part in many American supercar buyers’ decisions.
What About That Wow Factor

The only downfall to introducing a V8 Hemi powered Dodge Viper would be the loss of that legendary V10 wow factor. The Viper V10 makes massive power with a massive engine and in addition to everything else, the Viper engine has a very unique sound. Some Viper owners and those who are opposed to the suggestion of a V8 Viper insist that past of the Viper being the Viper is the V10 engine and that removing that would kill part of the car’s spirit. There is no question that a supercharger V8 packs a little less “look at me” quality than the long intake runners of the Viper’s V10, but if we are talking about a supercharged Hemi V8 that is smaller, lighter, more efficient, less expensive and more capable of making huge power numbers without compromising drivability – does that “wow factor” really matter? Tell us what you think about a V8 Viper in the comments below!

Steve Dingle R... wrote on June 16, 2014 - 5:36pm Permalink
Whatever it takes to 2-up on the Vettes and Stangs -- DO IT !! Lighter is good. Better fuel economy is good. Better chances for after-market parts for those that desire insane power is awesome.
Auto Motive wrote on June 17, 2014 - 7:21am Permalink
Everyone will be awed when the final hp/torque numbers on the hellcat engine are released. Reliable sources say its going to hit the 650hp mark or more. The next challenger or cuda will be lighter and will compete against the Z28 and new Mach 1 both at the drag strip and oval.
John Goreham wrote on June 16, 2014 - 6:02pm Permalink
Why not compromise and make it a V9? :)
Desmond Clark wrote on April 8, 2016 - 5:47pm Permalink
Does anyone remember the B.R.M. H-16 ?
Bart McGrath wrote on June 17, 2014 - 1:03am Permalink
What about adding two more cylinders to the Hellcat engine?
Todd Bentley wrote on June 17, 2014 - 4:28pm Permalink
I'm a Viper owner, and as part of the community the loss of the V10 would be devastating. It would end the essence of the car. But you're forgetting the most important part, the Hellcat STILL doesn't fit in the Viper. Gilles has confirmed this repeatedly. It would require an entire redesign of the car which just started a new generation 2 years ago. If it happens, it won't happen for years. At any rate, we're more likely to see a supercharged V10 over a swap.
Marc wrote on June 19, 2014 - 11:01am Permalink
Vipers are designed to be naturally aspirated. But they're also designed to be able to take the "Abuse" of adding a super/turbo charger after market. Honestly, I'd rather get a Viper with a V10 at 640 HP, and slap on a small 5-6PSI supercharger and get 750+ HP out of it than buy a V8. Changing it to a V8 would end anyone's love for the car, or people would be buying viper crate motors. I'm positive they can get more power out of the motor, they just never had a reason to until now.
jtm1504 wrote on June 19, 2014 - 7:32pm Permalink
They could lower the displacement or keep it the same on the v-10 and slap a turbo or two on it with a small amount of boost and put up awesome numbers. The v-10 and Viper go together like cake and ice cream
justin wrote on June 21, 2014 - 7:31pm Permalink
Why not make a v10 Hemi, which would be used for r&d v8. Get help from Ferrari on making it.
Tom wrote on June 23, 2014 - 9:54am Permalink
Keep the V10 but use direct injection.
Bryan wrote on June 24, 2014 - 7:14pm Permalink
Do Not, I repeat, Do NOT abandon the Viper's V10. Modernize it a bit if need be but do not step down to a supercharged V8. In a world of computer controlled, driver coddling nanny mobile super cars, the Viper should be the last word in exciting and useable analog performance
Francisco Corte... wrote on June 29, 2014 - 3:28am Permalink
I think its a great idea to put a V8 engine in a viper , and the should think about the people who are going to drive the car, and if you dont know what im saying is look at the corvette and at the new stingray those two cars have a stick and a automatic transmation and for one im now a huge fan of stick so I raither have a automatic dodge viper with a v8 or maybe they should put those tap to shift like in the Lamborghini and Ferraris but I just hope they change the engine and automatic transmation.
V8 wrote on June 30, 2014 - 3:50pm Permalink
It's not true what you wrote, viper V10 is a truck engine from ram truck built by chrysler, lamborghini replaced cast iron block with aluminum though and made some other changes.
Smelly Mel wrote on July 22, 2014 - 10:54pm Permalink
I have driven two V10 vipers and couldn't stand the vibration and sound of a ten cylinder four stroke engine. This was an awesome car 20 years ago when all they had to work with was a 1970's era 360. Dodge now has a state of the art V8 that sounds awesome, has more power, costs less, is 50 state legal and weighs less. New Viper sales are WAY below expectations. How could there possibly be any more obvious direction than to put the Hellcat engine in the Viper. Make a convertible and I guarantee I'll buy one!
Bob wrote on August 8, 2014 - 9:17am Permalink
Paxton supercharge the V10 for 850hp!!
Darren wrote on August 21, 2014 - 10:30pm Permalink
Take the V-10 out of the Viper and you have just another better looking Vette, I'm a Viper owner and the V-10 is one of the reasons I bought my car, even with some of it's short commings, Just like all super cars ! Why not go tell an Audio R8 owner who has spent more money for his V-10 that he should own a 8 cyclinder!! This is America "More is Better" Lets hope the Italians don't screw it up for us Vipper lovers. FYI, My girlfriend told me size does really matters !