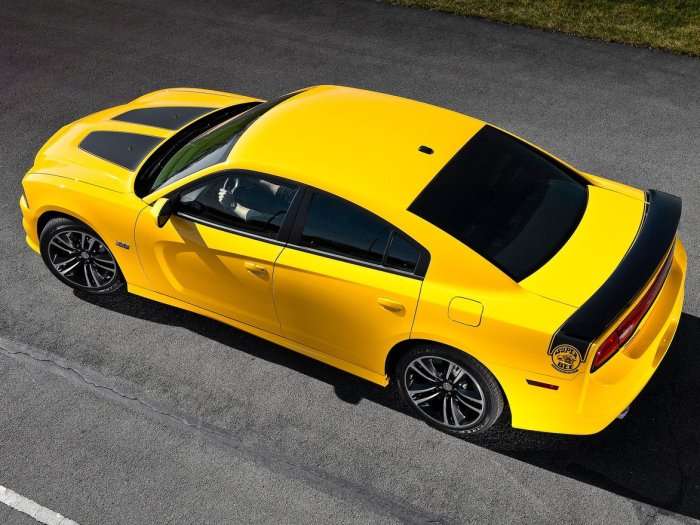 If the Dodge brand wants to sell even more Hellcat Hemi-powered Challengers and Chargers as the modern generation ends, a stripped-down “Core” or Super Bee version would almost certainly lead to a big spike in sales – packing 707 supercharged horsepower into a lightweight, low-price package.
Advertisement

The current Dodge Challenger was introduced for the 2015 model year, leading to a huge boost in sales. Leading up to the new generation, the SRT division was looking to boost sales of their premium performance models, so they introduced the Super Bee Charger in 2012 and the “Core” version of the Dodge Challenger SRT8 392 in 2013. The Chrysler 300C SRT8 also got a Core version and all three of these cars shared the budget performance marketing approach – delivering the performance of the SRT models without the premium interior bits.

As a result, the Charger Super Bee and Challenger 392 Core packed SRT performance with a lower price point and less overall weight. That sounds like the perfect equation for boosting Hellcat sales as the current Challenger and Charger near the end of their run.

The SRT Core and Super Bee Packages
The last Dodge Charger Super Bee was introduced for the 2012 model year and the Challenger 392 Core hit the lineup in 2013, but they shared a variety of features. Most notably, both of those models were devoid of many premium interior amenities such as leather seats, the premium infotainment system and a high-end sound system. They also came without fog lights or the adaptive suspension system, instead featuring a fixed sport suspension setup that focused more on performance and less on ride comfort.

As a result of removing those premium features, the prices of the Charger Super Bee and Challenger 392 Core were more than $4,000 less than the fully-loaded SRT 392 models. Of course, they were also a bit lighter, so they offered slightly better performance for a whole lot less money when compared to the original SRT models.

Now let’s imagine something like that package applied to the Hellcat cars.

Hellcat Charger Super Bee, Hellcat Challenger Core
Like the original SRT8 models, the Hellcat Challenger and Charger only come fully-loaded with things like heated and cooled, power leather front seats, a 19-speaker sound system, the adaptive suspension system and the optional sunroof - all of which could be deleted. Remove the sunroof option, install cloth seats with manual controls, add a simple 6-speaker sound system and run a modified version of the fixed sport suspension from the Daytona and T/A models, and you have yourself a modern Charger Super Bee and Challenger Core – except with Hellcat power.

The infotainment system in the Hellcat cars is essential to control the adjustable settings and the power modes, so that would have to stay, but everything mentioned above could be changed to reduce weight and MSRP. Even if all else remained the same as the current Hellcat cars, a Challenger Core or Charger Super Bee with the supercharged Hemi would offer better performance than the current models, even if only by a small amount. More importantly, if Dodge could chop, say, $4,000 from the MSRP of the Hellcat Challenger or Charger as we get into the final years of the current generation of each car, a low-price package that focuses more on raw performance could lead to a boost in muscle car sales.

Unfortunately, there has been no word of packages like this from FCA, but in each of the final two generations of the Dodge Charger, the Super Bee package has arrived shortly before a refresh. That is also true of the Challenger SRT Core, so with new versions of both Dodge muscle cars expected to arrive in the next few years, there is a chance that we could see one or both of these packages make a return to the lineup. In the case of a Hellcat Charger Super Bee, Mopar fans might buy it up based on the old school theme while the Challenger Core will definitely appeal to those folks who want the most Hellcat bang for their buck.

Let’s keep our fingers crossed and hope that Dodge plans to repeat their past plans with the end of the current Challenger and Charger generations, as they could lead to even more incredible muscle cars.

Jason wrote on March 1, 2018 - 7:28am Permalink
Dodge still has the core. Now they call it scat pack.
Randy wrote on March 1, 2018 - 7:29am Permalink
No, let it go come back revamped and refreshed in 2020. Putting new badges and different labels on pretty much the same car is getting old now. You can barely tell an SE from a hellcat these days. (Unless your a Mopar owner/fanatic).
Sean wrote on March 1, 2018 - 12:54pm Permalink
Dodge should finally step up, warranty their SRT vehicles at the track, and put some backing behind “StreetRacing Technology”. Kuniskis comments still eat at me regarding the Hellcat “slap some drag radials on it, take it to the track, run 10’s”. He neglected to say but the driveshaft will pretzel up and we won’t cover it. Yes I’m bitter.