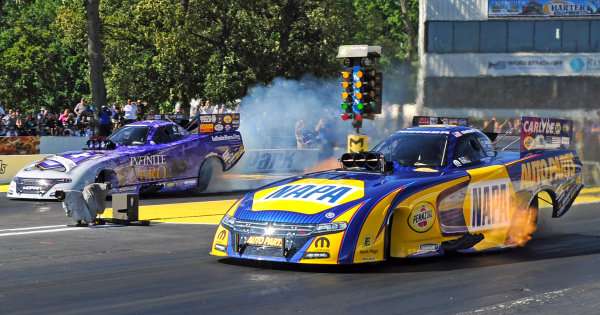 The domination of the Don Schumacher Racing Dodge Charger funny cars continued this past weekend as Ron Capps won the 4th straight all-Mopar final round, helping the Capps jump into the top spot in the 2016 Mello Yello series championship standings.
Advertisement

After a somewhat slow start to the 2016 Mello Yello Funny Car Championship season, the Dodge Charger drivers from Don Schumacher Racing have reeled off four straight wins, win Ron Capps and his Napa Charger taking the big win this past weekend at the Summernationals in Englishtown, New Jersey. However, Capps didn’t dance to the win without a fight – beating the legendary John Force, the reigning champ Del Worsham and teammate Jack Beckman with the quickest run of each round to win his 2nd straight and 3rd of 2016.

Qualifying
Once again, the Don Schumacher Racing Dodge Charger funny cars came out charging hard – with Capps laying down a track record of 3.870 at 318.62 miles per hour on his first qualifying run of the weekend. Matt Hagan and Jack Beckman also both ran in the 3-second range, but they were bested by all three John Force Camaros and two Toyota Camrys after the first round of qualifying runs.

This continued into the 3rd round, with only Capps, Worsham and John Force running in the 3s, so the field didn’t change much after the 3rd round, either. Finally, while a few cars laid down solid runs in the 4th and final qualifying round, the order of the funny car class didn’t change much and there were no changes towards the top of the ladder.

Eliminations
In the 1st round of eliminations at the Summernationals, Ron Capps beat John Hale and that was the only round in which he didn’t turn in the best time of the round. It was Matt Hagan who ran the quickest ET of round one, beating Jim Campbell with a 3.950 at 316.75 miles per hour. Jack Beckman and Tommy Johnson Jr also won their 1st run of the event, along with John Force, Del Worsham, Jeff Diehl and Tim Wilkerson.

After round one, the funny car ladder had four Dodge Chargers, two Toyotas, one Chevrolet Camaro and one Ford Mustang.

In round two, Ron Capps began his string of class-leading runs, beating John Force even though the Camaro driver had a huge starting line advantage. When Force ran into problems on the top end, Capps drove around the legend to advance to round two. Tommy Johnson Jr ran into issues and lost to Toyota driver Del Worsham, Jeff Diehl beat Tim Wilkerson’s Mustang and in a Mopar-on-Mopar battle, Matt Hagan was knocked out by Fast Jack Beckman – setting up a pair of Dodge-Vs-Toyota battles in the semifinals.

Ron Capps watched Del Worsham take a starting line advantage, but once again, the Dodge Charger kept putting the power to the ground while Worsham ran into problems down track. In the other half of the bracket, Jeff Diehl slept at the line and ran into troubles during the run, sending Beckman to the finals to meet his teammate.

The Finals
In the final round, the Dodge Charger of Ron Capps had lane choice over the Dodge Charger of Jack Beckman. After the two drivers pulled identical reaction times, Beckman ran into traction issues and he was forced to watch Capps win his 3rd race of the season and his 2nd straight. This win gave Don Schumacher Racing its 4th consecutive win and its 5th on the season.

Championship Standings
After the 10th event of the 24 race season, Ron Capps and his Dodge Charger have pulled into the lead in the funny car championship standings. Jack Beckman is 27 points back in 2nd place, Camaro drive Courtney Force is 3rd (71 points out of the lead) and Mustang driver Tim Wilkerson is 4th (98 points back). 2015 champ Del Worsham and his Toyota are in 5th (119 back), Matt Hagan is 6th (143 back) and Tommy Johnson Jr is in 9th (200 back).

Panasonic Updates Profit Forecast, Noting How Much Tesla Batteries Help The Jump
2022 Porsche 911 GT3 Laps Nurburgring in 7:04 With Journalist Behind The Wheel
END_OF_DOCUMENT_TOKEN_TO_BE_REPLACED