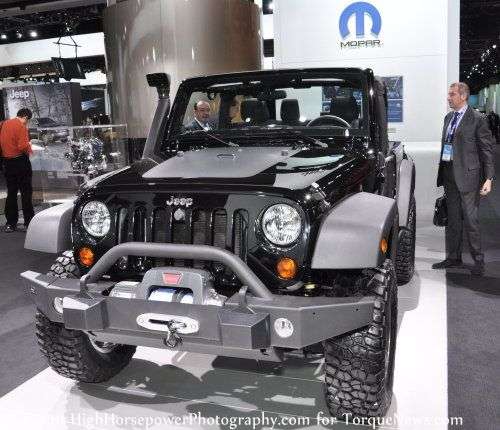 The Call of Duty: Black Ops Jeep transforms at the 2011 Detroit Auto Show

When the popular new video game Call of Duty: Black Ops was released in November 2010, Jeep announced that they would be offering a special Black Ops Edition Jeep Wrangler to celebrate the vehicle being featured in the highly anticipated shooter but at the 2011 Detroit Auto Show, Mopar accessorized the Black Ops Jeep to really reflect the intensity of the game.
Advertisement

When the Call of Duty: Black Ops Jeep Wrangler Rubicon was introduced, it was little more than a sticker and paint package, adding the Black Ops logos here and there with some black paint and trim, inside and out. The special edition trimline is cool but it really seemed to be deserving of more so in the Mopar display at Cobo Hall, Mopar technicians showed how easy it was to customize a Wrangler by adding a handful of modifications right in front of the show-goers.

Items like Mopar tubular doors with canvas inserts, Mopar Borla exhaust, a massive Mopar snorkel intake, and a front skid plate were added; giving the Black Ops Jeep the look of being far more ready for some serious action. In addition to the items that were repeatedly installed and removed, this Moparized Call of Duty: Black Ops Wrangler featured a custom front bumper with a Warn winch to add to the militant look and helping to draw attention was a raven haired beauty in a clingy camouflage outfit and knee-high black boots.

A complete list of the Mopar items (along with the part number and MSRP) included on this Moparized Call of Duty: Black Ops Jeep Wrangler can be found below, along with more pictures (click to enlarge) of this customized 2011 Wrangler.