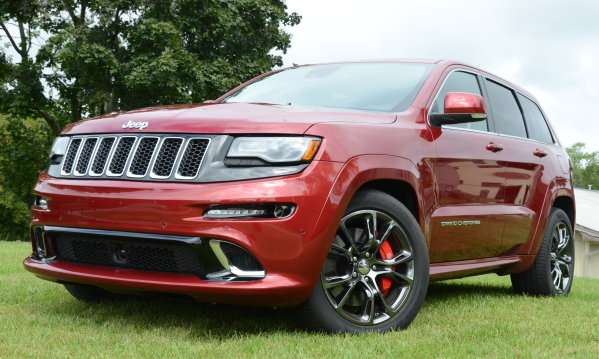 Calculating the Possible Price of the Hellcat Jeep Trackhawk

We know that the Jeep Grand Cherokee with the Hellcat Hemi is coming by the end of 2017 and while the Trackhawk might pack similarly stunning performance as the Dodge cars with the Hellcat engine – don’t expect the Hellcat Jeep to be anywhere near as budget-friendly.
Advertisement

One of the aspects of the 2015 Dodge Challenger SRT Hellcat and the 2015 Dodge Charger SRT Hellcat that have made them so incredibly successful on the sale sheet is the shockingly low MSRP. When they were first introduced, the Challenger had an MSRP below $60k and the roomier 707hp Charger started under $65,000. They both got slight price increases for the 2016 model year, but when compared to other cars with anywhere near 707 horsepower – the Dodge Hellcat cars are a smokin’ bargain.
Unfortunately, when the 2018 Jeep Grand Cherokee Hellcat – or the Trackhawk as it could be named – won’t be as cost effective as the Dodge cars. This is all purely speculation, but based on the price of the current SRT Jeep, the price of the current SRT Charger or Challenger and the cost of the Hellcat Charger or Challenger, it looks like the Hellcat Jeep could start north of $80,000.

Jeep Hellcat Pricing
Before getting into how much I expect the 2018 Jeep Grand Cherokee Hellcat/Trackhawk might cost, let’s look at some current pricing numbers for the high performance Dodge and Jeep models.

Both the Charger and Challenger SRT 392 models come with the same massive Brembo braking package, the same adaptive suspension setup and the same premium interior spread.

The 2016 Jeep Grand Cherokee SRT has the same Brembo brakes, the same adaptive suspension setup and the same loaded cockpit as the Charger and Challenger SRT 392 models and it has a base MSRP of $65,495. If you add in the Laguna leather that comes in the SRT Hellcat cars, that adds another $1,495 to the final price.

However, the supercharged Jeep will almost certainly have a heavier duty four wheel drive system than the SRT 392 models and with stronger items comes a bigger price. With that in mind, I would expect that the Hellcat Jeep package will add at least $17,000 to the price of the SRT 392 Jeep with the Laguna leather – leading to a starting MSRP around $83,990 Of course, since we are still two model years away from the Trackhawk Jeep hitting dealerships, we are likely to see a steady increase in prices and while those increases shouldn’t be huge, they could help push the base price of the Hellcat Jeep up over the $85,000 range.

To some people, a Jeep Grand Cherokee that costs more than $85,000 seems crazy, but you have to keep in mind that this will be the absolute leader in the global high performance SUV segment. Nothing from Lamborghini, Porsche or anyone else will be able to go toe to toe with the Hellcat Jeep and with those vehicles costing far more than $85,000, the supercharged Jeep will still be a bargain next to the competition. For example, the Porsche Cayenne Turbo S with “only” 570 horsepower starts at $157,300, so the Hellcat Jeep would be nearly 50% less costly.

Although the $80k price tag won’t score the Trackhawk Jeep the same bargain status as the Dodge Hellcat cars, it will still be the least expensive vehicle of its kind in the world and even with a price starting north of $80k – I bet that it is going to sell like hot cakes when it arrives late in 2017.

(All current pricing figures based on the MSRP on Dodge.com and Jeep.com)