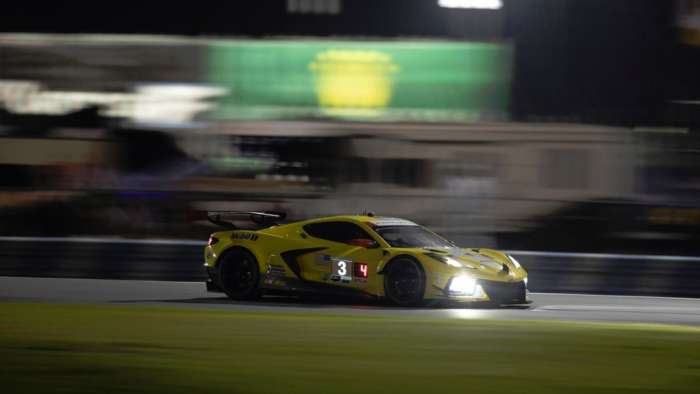 C8.R Corvette Daytona Debut was Solid, Could Have Gone Better

The new Chevrolet Corvette C8.R looked good in the early stages of the 2020 Rolex 24 at Daytona and the #3 car set a team record for the most laps in the 24 hour event, but the duo of mid-engine Chevy race cars had to settle for 4th and 7th in the 7-car class.
Advertisement

The all-new, mid-engine Chevrolet Corvette is the biggest automotive news of 2020, and with a new generation of the fabled American sports car comes a refreshed racing program. The Corvette Racing teams got their first official on-track action this past weekend at the Rolex 24 at Daytona and in the grand scheme things, it could have gone a whole lot worse. Then again, it could have gone a whole lot better, too.

Both cars finished and the #3 Corvette spent some time leading the class, but the #4 car ran into serious mechanical issues in the 9th hour and in the end, neither car finished on the class-leading lap. However, this was technically the fastest Rolex 24 that the Corvette Racing team, covering 2,794.6 miles from start to finish.

Corvette C8.R Fast Early
The 2020 Rolex 24 started off well for the new Corvette race cars, with both teams battling with the competitors from Porsche, BMW and Ferrari during the first third of a the race. The #3 C8.R spent some time in the early stages at the front of the GTLM class and at the 8-hour mark, the debut of the new Corvette race car couldn’t have been going any better. 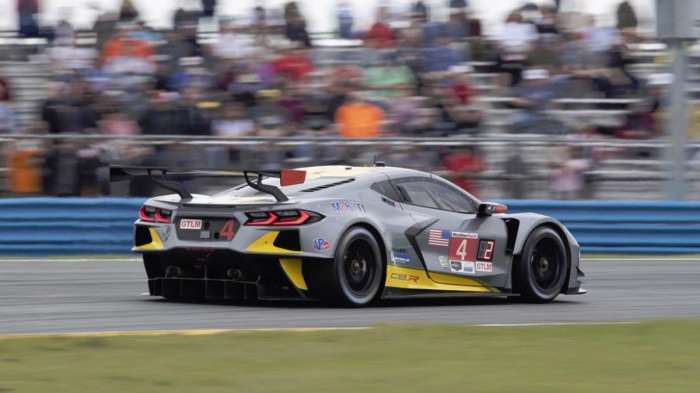 However, around the 9th hour, the #4 Corvette developed a severe oil leak. This forced the team into the garage area to diagnose the problem. The problem was quickly discovered, but fixing the leak required the team to remove the engine from the car. In total, the fix swallowed up roughly 9 hours, taking the #4 Corvette C8.R of Oliver Gavin, Tommy Milner and Marcel Fässler completely out of contention.

In some cases, a problem that took 9 hours to fix would have led the team to throw in the towel, but the Corvette Racing program wanted to get as many laps in as possible, so the repairs were made and the #4 finished the race. The latter stages were used for evaluating different suspension and tire settings, while also giving the drivers more competition seat time.

In the end, the #4 Corvette finished 7th in the 7-car class and 36th overall in the 38-car field. The trio of Gavin, Milner and Fässler completed 461 laps, finishing 325 laps behind the class leader and 372 laps behind the overall winner.

Strong Showing for #3
While mechanical gremlins ruined the 2020 Rolex 24 for the #4 Corvette Racing team, things went much better for the #3 car. The trio of Antonio Garcia, Jordan Taylor and Nicky Catsburg led the GTLM class in the early stages of the race and the team’s best lap time of 1:42.364 (run by Jordan Taylor) was second-quickest in the class. The only quicker lap was a 1:42.168, run by Jesse Krohn who drove the class-winning #24 BMW M8 GTE. 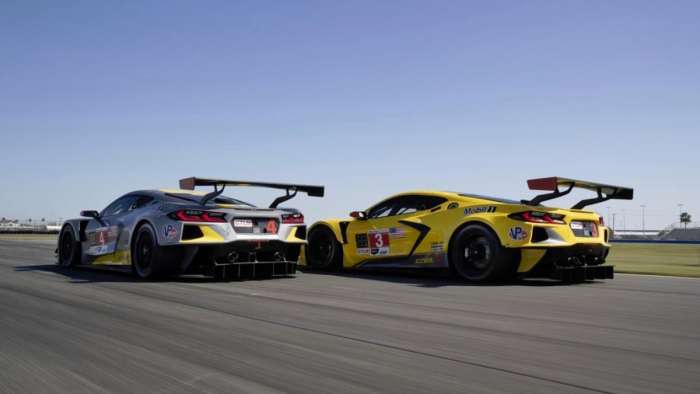 Really, the #3 Corvette C8.R was just as quick as the rest of the cars in the class throughout the entire 24-hour race, but there was one obvious metric where Chevy trailed the competition. The #3 Corvette finished 4th in the GTLM class, with a BMW and two Porsche 911s claiming the three podium positions. Those three cars each pitted 27 times in the 24-hour race, whereas the #3 Corvette pitted 29 times. Those two extra pit stops account for the one-lap difference between the Corvette and the top three finishers in the class. Based on this, you would think that the IMSA Balance of Performance system would allow the Corvette to add some fuel capacity, as without those two extra stops, the C8.R would have been in the hunt for the class win at the end.

In any case, the #3 Corvette finished 4th, one lap behind the class winner and 48 laps back of the overall winner in the Daytona Prototype class. The key point with this strong finish is that with 785 laps run, this is the most mileage ever driven by the Corvette Racing program in its legendary tenure at the Rolex 24. In other words, the new Corvette race car covered more ground in 24 hours than any of the C5, C6 or C7 variants. Of course, the event conditions play into that, as fewer cautions and clear weather lead to more speed and more laps, but aside from fuel mileage, the debut of the C8.R couldn’t have gone much better for the #3 Corvette.

Plus, Chevrolet was happy to see both cars finish the race in the debut of the newest generation Corvette race car.

"It was a tremendous honor to debut the Corvette C8.R at the Rolex 24 Hour at Daytona – 22 years after we debuted the C5-R in the same location," said Jim Campbell, US Vice President Performance and Motorsports. "I’m so proud of our team and how they prepared and executed the race with the 2020 mid-engine Corvette. I can’t wait for the rest of the season and watch the excitement from our fans grow with every race." 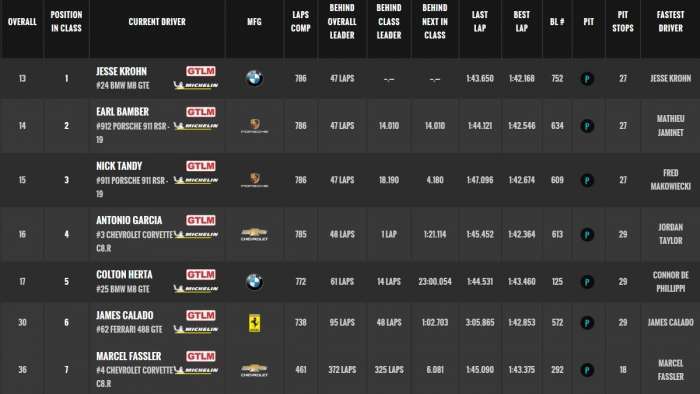 noneedforaname wrote on January 27, 2020 - 6:14pm Permalink
I kinda feel like the Corvette team held back a little bit particularly towards the end. As far as the extra pit stops - the first pit for the #3 came a little early with a minor gearbox issue. It wasn't anything noteworthy, but they did say they came in a little earlier than anticipated, and I think perhaps threw their pit schedule off - especially with the utter lack of caution and drivers on other teams pulling multiple consecutive stints. I think it threw some of the pre-race strategy up in the air a bit. It was also reported during the race that the drivers were reporting some pretty heavy vibration in both cars. I heard them mention that in the broadcast a couple of times early on - and once the #4 came in, it seems like the #3 stopped pushing quite so hard. I don't think they were babying the car - but it was pretty clear they went from pushing/be aggressive for position as they were early - to just running a good pace and consistent. The cars clearly have more potential than they realized - and to me it seems like the team said "let's not engage the 20 hour dog fight porsche and bmw are on..." Which, makes sense. I mean, there was a time in the last couple hours where the 911/912 cars were fighting each other for second (part of how the BMW opened up that lead at the end). That's just, not smart racing (even if it's exciting to watch). If i was on the vette team, I'd probably caution towards steering clear of that as well. It was a great race, and also a little unusual. I think the circumstances of everything just lent to a little more caution than the BMW and Porsche teams were exercising. That said, it is interesting that even running a more conservative race - they were right there performance wise. Sebring is going to be a blast I think.
William M Craig wrote on January 27, 2020 - 7:05pm Permalink
Reminds me of the 512M Ferrari Penske did for Kirk F. White to beat the 917/20 Porsche. It all hinged on the pit stop. The Ferrari needed a much lager filler cap and the body was deemed "junk" and a plastic style body was done in Ca. It is the little foxes that ruin the vine. If you can carry more fuel you need to fill up fast. As for the oil leaks I can't understand how that happened but one year at Sebring They had a winner in The Mako Shark but it look smuged and dirty. They bought in a really pretty one and it was full of bugs.
noneedforaname wrote on January 27, 2020 - 7:34pm Permalink
The oil leak turned out to actually be a cracked bell housing. Hence the 8 hour repair and the need to yank the whole engine. When it first went in, they thought it was some sort of mounting bracket from what was reported - but later on they admitted the entire bell housing was trashed. Considering the reports of heavy vibration early on, that would be obvious cause for concern, which I think lead to the less aggressive approach in the later hours. To me it was clear there was a whole bag of potential they weren't tapping. When Garcia jumped in at the end, he got back on the track and the porsches and BMW leaders were right up behind him - about to lap. They got on the straights and he just walked away from 'em. Compared to the rest of the later hours, it kinda told me they knew they had plenty of power on tap, but were concerned about leaning on too hard (again, with a car that just blows a bellhousing out of the blue, I can understand why). But again,all things considered - a brand new car with a new engine, new format, never been raced before - to keep pace with the 911/912 and that BMW that were just AT eachother's throats for 20 hours straight.... I'm impressed and excited for how this season turns out. I think they have a solid platform to build on, even if this wasn't the best outing in the world. Lots of upward potential.
MICHAEL KNIGHT wrote on February 1, 2020 - 5:07pm Permalink
The C7R will prove to be a far superior machine to the C8 Fiero 2. Both on, and off track. KNIGHTRIDER