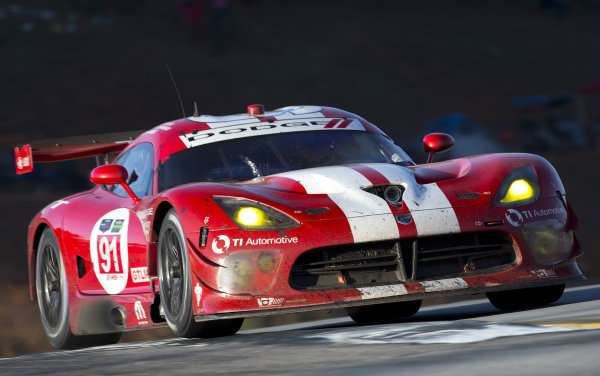 File this story under “U” for Unbelievable as less than an hour after I published my piece about the Dodge Viper winning the driver and team championship for the 2014 IMSA United SportsCar Championship series – the Chrysler Group has announced that they will discontinue the factory backed Viper racing program immediately.
Advertisement

There are some decisions in the automotive world that we just don’t understand and the Chrysler Group’s decision to kill the factory Dodge Viper racing program on the very first business day after Kumo Wittmer and the #93 Dodge Viper GTS-R won the 2014 United SportsCar Championship driver and team titles is one of those decisions.

Win on Saturday, Quit on Monday
Back in the day, the idea of motorsports was to have people see an automaker’s vehicles win on Sunday and they would buy those cars on Monday, but it seems that Dodge is taking a very different approach. Unbelievably, less than 48 hours after announcing that Dodge viper driver Kumo Wittmer had won the driver’s championship and the #93 Viper had won the team championship, the Chrysler Group issued a statement that they are immediately pulling factory support of the Viper endurance racing program. No real reason was given…just more of the same corporate fluff that is meant to cushion the blow to Dodge racing fans who are seeing yet another opportunity to cheer on their favorite cars go by the wayside.

“Our company has made a business decision to discontinue the SRT Motorsports Dodge Viper GTS-R racing program,” said Ralph Gilles, Senior Vice President of Product Design, Chrysler Group LLC. “We are very proud of the amazing achievements our fantastic teams, drivers and partners have achieved on track the last few seasons. We thank them for their hard work, effort and commitment to SRT Motorsports. It’s been an honor to be a part of the inaugural IMSA TUDOR United SportsCar Championship season and we wish them every success in the future.”

What I think that Ralph Gilles actually meant to say is that the corporate bean counters - who relate every aspect of the automotive world into impact on sales – have put an end to the financial backing of the Viper racing program. After all, when the Vipers were being sold at their initial price and they were being showcased in the world of endurance racing, they weren’t selling well. The bean counters approved a huge price cut for 2015 and in turn, they will compensate the bottom line by adding that extra $15,000 per unit back in from what would have been spent on the racing program.

Another Dodge Motorsports Program Dead
The announcement to kill the Dodge Viper factory racing program follows as the latest in a long line of departures from racing under Fiat SpA. First there was the decision to leave NASCAR at both the Sprint Cup and Nationwide Series levels followed by the move to leave the TORC. It should be noted that Chrysler pulled their factory support of those two series’ in years following championship wins. More recently, we watched the Dodge Dart Global RallyCross program buried after just two lackluster seasons and now we have Dodge pulling out of endurance racing. More curiously, Dodge has pulled its support of the endurance racing Vipers immediately following a championship win. It’s like they hate winning so much that when they win, they refuse to compete anymore.

Yes, that is ridiculous…but I know that most Dodge/SRT racing fans would agree that Dodge leaving yet another form of motorsports where they were very successful is just as ridiculous.

The good news for Dodge/SRT/Mopar racing fans is that Mopar still dominates the upper ranks of NHRA drag racing. However, they have been successful this year and since that seems to be a criteria for killing, we have to wonder how much longer the accountants will allow the company to support the drag racing program.

Goodbye Dodge Viper racing program…we hardly knew ye. So much for backing up the championship in 2015.