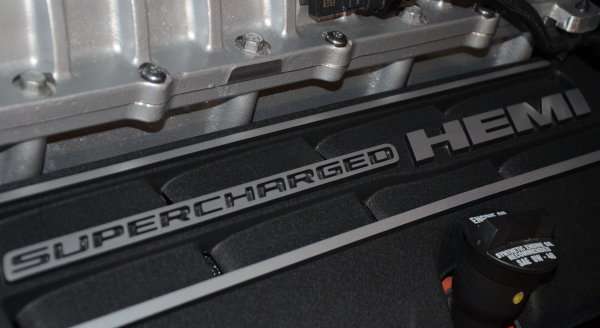 Mopar fans and lovers of very fast SUVs have been clamoring for a Hellcat version of the Jeep Grand Cherokee SRT and while a 707 horsepower Jeep would be incredible – the success of the Hellcat Challenger and the expect popularity of the Hellcat Charger are likely the biggest issues preventing the Chrysler Group from dropping the supercharged Hemi into a Grand Cherokee in the near future.
Advertisement

The Jeep Grand Cherokee has been one of the most popular models in the SRT lineup over the past few years and really, it isn’t hard to understand why. Not only does the Hemi-powered Jeep offer performance that is comparable to many pure performance cars sold in America, but it also has plenty of room for four adults, an impressive cargo area and the capacity to tow a hefty load. The SRT Jeep has proven to be a performance vehicle that can do way more than just go fast and that has led to a big market of buyers who want an SUV that will do everything that they want – and go very fast in the process.

This growing enthusiast following behind the SRT Jeep has led many people to demand a new high performance Grand Cherokee packing the new 6.2L supercharged Hellcat Hemi that provides 707 horsepower and 650lb-ft of torque in both the 2015 Dodge Challenger and 2015 Dodge Charger. A Jeep with that kind of power would not only be the most powerful production SUV ever sold for road use by any automaker in the world, it would likely also be one of the best performance four wheel drive vehicles in the world. Again, these facts make the Hellcat Jeep seem like a very good idea, but there is one major factor that I see preventing the arrival of a Grand Cherokee SRT Hellcat in the near future – the Hellcat Challenger is incredibly popular and the Hellcat Charger is likely to be even more popular.

Why Hellcat Challenger/Charger Success Prevents a Hellcat Jeep
Shortly after it was announced that the Chrysler Group would build literally as many Dodge Challenger SRT Hellcat models as they could sell, an interesting problem popped up in informal discussions with various Dodge and SRT representatives. The key component of the 6.2L Hellcat Hemi is the supercharger that is produced by IHI for Chrysler. IHI is not a massive company and with the Hellcat supercharger setup being built in the same facility as the rest of IHI’s popular products, folks within Chrysler were concerned that IHI wouldn’t be able to build enough superchargers to keep up with the demand.

Fast forward to last month, when it was announced that Dodge dealers had placed orders for more than 5,000 examples of the Dodge Challenger SRT Hellcat. Not surprisingly, the 707hp Challenger has generated a great deal of interest and early sales, so the supply capacity of IHI is likely already stressed a bit. Also, as popular as the Hellcat Challenger is over the first few months of sales and deliveries, the 4-door, 707hp Dodge Charger is likely to be even more popular when it goes on sales.

In other words, after Chrysler reps stated that they were concerned about production constraints on the supercharger housing, the Hellcat Challenger is selling better than expected by many people and the Charger is likely to sell even better. Based on the early sales figures and the projected sales of the 707hp Charger, those same folks at Chrysler have to be watching the production capacity of IHI very closely right now, as that is seemingly the biggest factor slowing down the production and delivery of the Hellcat Challenger.

Unless the Chrysler reps were incorrect in their concerns about Hellcat Hemi supercharger production constraints through the third party manufacturer, every IHI supercharger unit built in the next 6 months or so is likely already spoken for, with the destination being the engine bay of a new Challenger or Charger. Because of that, it seems very unlikely that Chrysler will roll out anything else that requires the Hellcat supercharger setup in the near future so if they do plan to make a Jeep Grand Cherokee SRT Hellcat – it probably won’t be for at least a few years as the automaker works to answer all of the requests for the Hellcat Challenger and, beginning next year, the new Hellcat Charger.

Of course, there is the possibility that IHI is having no problems meeting the demand for the Hellcat Hemi superchargers and if that is the case, we could see a new Hellcat model coming down the pipeline sooner than later. However, I still expect the company to move forward with just the Charger and Challenger packing the Hellcat Hemi until the interest in these models dies down a bit. If Chrysler does plan to make a Hellcat Jeep, I wouldn’t expect to see it in production form until 2016 at the absolute earliest…but we can all still dream.

Kenny Bedwell wrote on December 26, 2014 - 9:52pm Permalink
Does anybody know, or how can I find out how any challenger hellcat are built every quarter? I was told 300, every quarter, by the dealer where I ordered mine. I was told 1500 at different dealership, I called SRT the woman on the phone said they are told this information.
Anthony wrote on December 26, 2014 - 10:52pm Permalink
Why couldn't they make it special order or an option to choose from different motors srt hellcat jeep would be amazing!!!
svede wrote on December 27, 2014 - 1:14pm Permalink
With over 700 HP and a high center of gravity I'd expect to see a lot of Jeeps on their roof.
Nick wrote on December 29, 2014 - 11:39am Permalink
A 707HP AWD Jeep Grand Cherokee would be insane, it already crushes the Cayenne & ML63 AMG!
Alex Idol wrote on February 18, 2015 - 1:02am Permalink
I own the new limited. Love the car but will trade in for the hellcat version in a heart beat once they are out. It will destroy all the high end AWDs Mercedes(AMG), Porshe Cayenne, BMW X5 etc. The look the drive and the performance will make the competition scratch their heads. Go Hellcat
Chris Lowe wrote on April 7, 2015 - 9:56am Permalink
Where did you get your facts? IHI group is a $10B per year company according to their 2014 financial reports. What do you consider a massive company???
big sam wrote on July 9, 2015 - 11:00pm Permalink
I'm waiting to get that hellcat charger til I heard about them dropping a Cherokee with that hellcat power under the hood. Imma wait til I get the official word. FCA give it to me hellcat hellcat hellcat Cherokee let's go