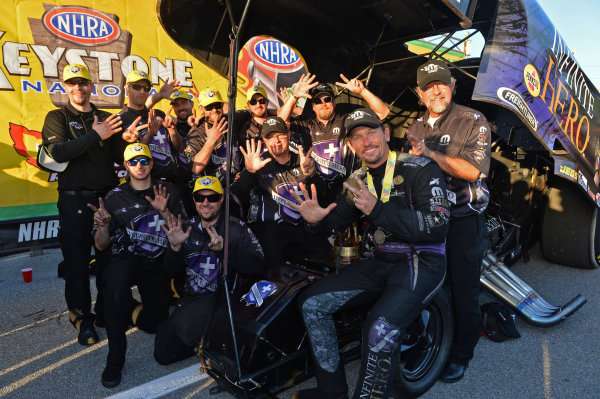 This past weekend was another big one for the Dodge Charger funny car team and driver Jack Beckman, as “Fast Jack” set a new NHRA funny car ET record in route to winning his 7th event of the season and the 15th of the year for Don Schumacher Racing – all while moving the 2nd spot in the championship race, just 16 points out of 1st with two events left.
Advertisement

When the teams of the NHRA Mello Yello Drag Racing Series got to Reading PA this past weekend for the Keystone Nationals, they were met by a strong storm that prevented the teams from making their usual spread of qualifying runs – but that didn’t stop Jack Beckman and his 2015 Dodge Charger funny car from setting yet another class record. More importantly, while turning in smokin’ fast runs all weekend long, Beckman claimed his 7th win of the season and the 15th in 21 events for the 2015 Dodge Chargers of Don Schumacher Racing.

Rain Dampens Qualifying
Maple Grove Raceway was inundated with rain this past weekend, preventing the teams of the NHRA Mello Yello funny car class from getting their normal spread of qualifying runs. Instead, each car got a single qualifying run on Saturday and because of that, the qualifying times were shockingly slow, with only 2 cars turning in runs faster than the 5 second range. Only two of the cars had qualifying runs with speeds over 300 miles per hour, only 1 car ran in the 200mph range, one 1 car ran in the 100mph range and the 10 other funny cars who made a timed run to get into the field ran under 100 miles per hour in qualifying.

Fortunately, by the time the elimination rounds came around on Sunday, the track had gotten dry enough to allow for some quicker runs – and they got much, much quicker.

Eliminations
In round 1, Jack Beckman ran into issues and was way off of the pace, but he still beat Alexis DeJoria, who had bigger issues and ran an even slower time. Ron Capps beat Paul Lee and most importantly, Tommy Johnson Jr beat Del Worsham, giving the rest of the contenders a chance to cut into his lead in the standings. Unfortunately, Matt Hagan lost in the first round and couldn’t take advantage of Del’s early loss, but the rest of the Charger drivers – including John Hale, who beat Robert Hight’s Camaro with his 2014 Charger – moved onto the second round.

In round 2, Jack Beckman took on Tommy Johnson Jr and when Fast Jack ran his first 3-second pass of the event, he stamped his ticket to round 3. Ron Capps also ran in the 3s and moved onto round 3 while John Hale broke and lost to Chad Head.
In the 3rd round, Capps and Beckman squared off in an all-Charger battle. Capps had been quicker in qualifying and round 1, but Beckman had the better run in round 2. The trend continued, as Fast Jack took a holeshot lead and turned it into a big win – setting a new funny car ET record at the same time. His pass of 3.897 seconds is just the latest of the national records set by Beckman and his 2015 Dodge Charger, so heading into the finals with Chad Head, the Toyota driver had to be a bit nervous.

The Finals
In the finals, Jack Beckman and his 2015 Dodge Charger took a starting line advantage and held off Chad Head’s Toyota. Head was closing on the top end and he actually turned the quicker ET, but he wasn’t able to overcome the holeshot lead. As a result, Jack Beckman took home his 7th win of the season, the 15th of the year in 21 events for Don Schumacher Racing.

Championship Standings
Now that we have completed 3 of the 6 races in the 2015 Mello Yello Countdown to the Championship, Del Worsham still hangs onto the top spot in the title run, but his lead his been cut to just 16 points over Jack Beckman. Matt Hagan is 3rd (90 points back), Tommy Johnson Jr is 4th (98 points back) and Ron Capps is 5th (105 points back).

That is a Toyota being chased by the four Dodge Charger funny cars that have dominated all season long and should Del have another early loss next week – the door will be open for one of the dominating DSR cars to move into the top spot.