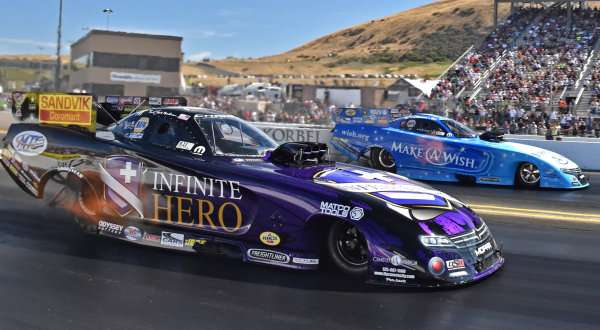 This past weekend, Jack Beckman and his Don Schumacher 2015 Dodge Charger funny car were a dominant force at the 2015 Sonoma Nationals in Sonoma California, setting a new track ET record en route to winning his 5th event of the season in yet another all-Mopar final round.
Advertisement

This past weekend’s stop in Sonoma California marked the 15th event of the 2015 Mello Yello Drag Racing season and having won 11 of the first 14 events, the four Don Schumacher teams in the Funny Car class were clear favorites before a car hit the track. The quartet of Matt Hagan, Ron Capps, Jack Beckman and Tommy Johnson Jr have all taken turns winning races this season, which Hagan and Beckman each winning 4 while Capps has taken 2 wins and Johnson has taken 1 – leaving John Force and Tim Wilkerson as the only other drivers in the Funny Car class to win events this season.

In many of the previous events this season, the DSR Dodge Charger funny cars needed some time to move to the top of the ladder, but Jack Beckman made it very clear from the first run down the track that the Chargers were the ones to beat in Sonoma.

Qualifying
Right out of the trailer, Jack Beckman and his 2015 Dodge Charger R/T funny car were turning heads, running a Sonoma track record of 3.982 at 320.05 miles per hour. Needless to say, setting a new track record put Beckman in the top spot after qualifying round 1, while Capps sat 4th, Hagan was 5th, Johnson was 10th and non-DSR Dodge driver John Hale was 13th.

After making a record run in round 1, Beckman came out for round 2 with the goal of making it very clear that the first run was no fluke. After running a stunning 3.982 to start his day, Beckman went head to head with Matt Hagan in the second round of qualifying and Hagan turned a quicker time than Beckman’s first run, turning an impressive 3.967. However, Beckman backed up his record with another record-setting run, laying down a 3.921 at 323 miles per hour. That kept Beckman in the top spot after round 2 with Hagan 2nd, Capps still 4th, Johnson moved to 10th and Hale remained 13th.

In rounds 3 and 4, Beckman, Hagan, Capps and Johnson all turned in slower runs, so they had to rely on their first two rounds, but it should be noted the Beckman ran a 3.958 in the 4th round of qualifying, but his 3.921 was still the best of the weekend.
The official starting ladder had Beckman in 1st, Hagan in 2nd, Capps in 4th, Johnson in 10th and Hale in 14th.

Eliminations
In round 1, Jack Beckman got off to a great start, running a 3.993 and stomping the Toyota of Tony Pedregon. Beckman would be the only funny car driver to run in the 3 second range during eliminations. Ron Capps crushed Jeff Diehl, Matt Hagan beat Paul Lee in a close race and Tommy Johnson Jr beat Tim Wilkerson while John Hale fell to Camaro driving legend John Force.

In round 3, the Dodge Charger of Jack Beckman took on the Camaro of Robert Hight while Johnson’s Charger took on the Toyota of Cruz Pedregon. Hight pulled the starting line advantage against Beckman, but the Dodge ran the Camaro down to secure the place in the finals. On the other half of the ladder, Tommy Johnson Jr pulled a huge starting line advantage and took an easy win when Pedregon had troubles shortly into the run.

Finals
In the finals, Jack Beckman had lane choice and while he wasn’t able to grab the starting line advantage, he drove around teammate Tommy Johnson Jr on the big end to claim his class-leading 5th win of the season.
In winning the race, Jack Beckman turned in the quickest pass in every round of eliminations and in 3 of the 4 qualifying rounds. Now THAT is domination.

Championship Standings
Even though Beckman has won one more race than has Matt Hagan, Hagan still holds a lead in the season points championship. Hagan leads Beckman by 57 points while Tommy Johnson Jr sits 4th, and Capps is 5th.