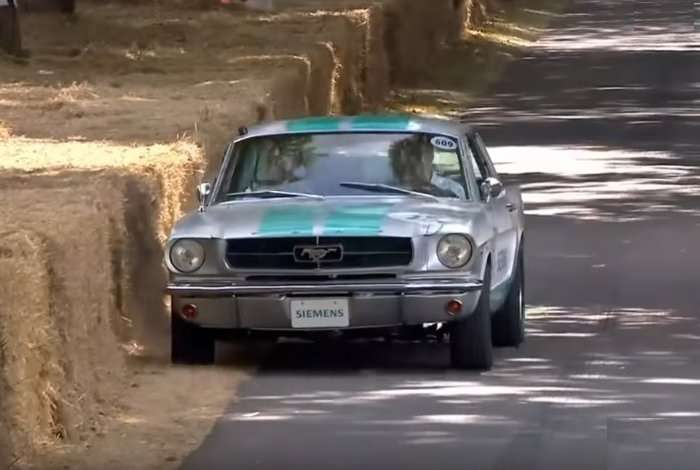 A self-driving 1965 Ford Mustang took to the curvy course of the Goodwood Hill Climb yesterday to show off the advancements in autonomous technology, but the first run nearly ended in disaster, forcing a human to take control several times in order to keep the classic pony car on track.
Advertisement

This year marks the 25th anniversary of the Goodwood Hill Climb and to celebrate the “Silver Jubilee”, Siemens and Cranfield University teamed up to create an autonomous 1965 Ford Mustang to compete in the unique event. It is not the first self-driving car to make a run at Goodwood, but it is the first classic car of its type, with the build team picking a Mustang due to the fact that it is so well known around the world.

The idea in building this autonomous 1965 Ford Mustang is that they are combining a classic automotive icon with what could very well be the future of the automobile – but as the video above shows, this technology has a long way to go before it will be widely accepted.

Staggering Up Goodwood
The first video below shows the maiden voyage of the autonomous 1965 Ford Mustang in the Goodwood Hill Climb. While the car drives itself, it carries four people up the hill – an emergency driver and three passengers. As it turns out, it was a wise move having an emergency driver, as the car required his assistance several times on the first run.

When the run begins, it doesn’t take long for things to go awry, as the classic Mustang slowly weaves side to side on the narrow track, running off-track and nearly hitting the straw bales within eye-shot of the starting line. After the driver keeps it out of the straw, the car then cuts very close to the inside wall in the first turn before veering out towards the outside of the turn – at which point the human driver is forced to once again intervene. For those wondering, the crowds of spectators are safely behind barriers, preventing any "cars and coffee type" accidents from happening.

As the slow run up Goodwood continues, the self-driving Mustang continues to struggle to get its bearings, nearly running into the straw-lined barriers several times throughout the run. There is no question that if not for the corrections of the human driver, this autonomous car would have crashed, but with the help of the man behind the wheel, the car makes it safely to the end of the course – likely turning one of the slowest times of the day.

You can watch the troublesome run below.

A Better Run
Fortunately, the next run up Goodwood for the self-driving 1965 Ford Mustang went a bit better. The run was still incredibly slow, with plenty of odd weaving, but there seemed to be far less situations where the human driver was forced to keep the car on the track. During this second run, the announcers mention that with each run, the system learns the track and that allows the car to make the next run more smoothly, but this still serves as a bit of an embarrassing situation for the autonomous driving community. While nothing terrible happened, the first run by the autonomous Mustang showed very clearly why so many drivers question the safety of self-driving cars.

You can check out the better of the two runs below.

DeanMcManis wrote on July 15, 2018 - 4:38am Permalink
I understand that there is a challenge in the fact that this road has no painted lines, but it still seemed fairly sloppy, and at times outright mistaken, requiring immediate correction. I would not trust it to drive a car with me in it. Several years ago I helped in the development and testing of autonomous driving cars. First off-road and country road testing, and later city driving with signals, crosswalks, pedestrians, and street signs. We would not have shown the car off publicly if it behaved this poorly. My guess is that this was using a relatively inexpensive system/chip that was designed for multi-lane highway use, as a driving assist with cruise control. And it was simply out of it's element here. It was however brave of them to show it off at the Goodwood event.
EVOLIX wrote on July 15, 2018 - 10:07am Permalink
I'm all for great advancements in tech but none of these self driving technologies are really read for prime time. Not to mention who is to blame legally if these things crash or kill somebody. I hope this tech never comes without a steering wheel,gas and brake pedal. At least the driver behind the wheel had a brain and stopped this beautiful car from wrecking it self or hurting someone. Always remember, if its made by people its inherently flawed.
DeanMcManis wrote on July 15, 2018 - 6:50pm Permalink
I disagree. Auto driving systems like Tesla's Enhanced Autopilot are very sophisticated and accurate. The key in accuracy is having multiple simultaneous scanning technologies, and importantly learning from errors, and constantly evolving the design and software to offer better performance. I for one would totally trust Tesla's autopilot in my daily commute. Unfortunately the press has blasted the few autopilot accidents across the news and internet, so that people have a inaccurate idea that it is unsafe. It is interesting to me that the press never mentions the 3,000 similar accidents that have occurred across the country in the same time frame as the couple over-publicized Tesla auto pilot accidents. No system is perfect, but these automated driving systems can constantly monitor 360 degrees around the car, every second, 24/7. Most of us have seen accidents caused by distracted (read texting/talking), drunk, impatient, bored/tired drivers. The good news is that most of the major automakers are working on auto-driving capability today. And as the systems improve, and the benefits are proven over time, I believe that auto driving systems will be mandated over the next 10 years for all new cars, just as ABS and traction control are now.