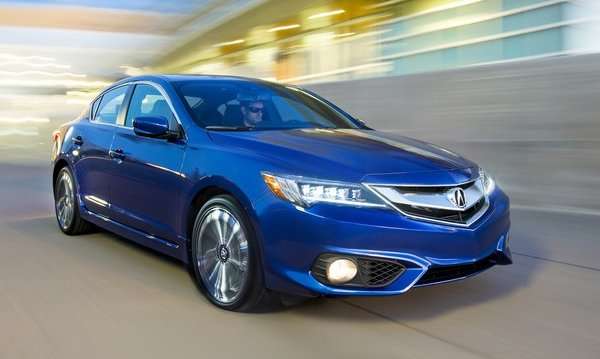 Acura ILX Exposes a Big Gap in the US Luxury Segment

I recently had a chance to spend a week behind the wheel of the Acura ILX and while driving this compact luxury sedan, it occurred to me that there is really no competition for the ILX – exposing a pretty substantial gap in the American luxury car segment.
Advertisement

Whenever I am driving a new car, truck or SUV, it never fails that someone in my family asks “what have we had that would compare to this car”. When I was asked that question about the Acura ILX, I thought for a second and I couldn’t come up with something. In terms of a true compact luxury sedan, there is really nothing else on sale in the USA right now that can compete with the ILX in terms of size, price, power and level of luxury.

Chrysler, Lincoln, Infiniti and Lexus don’t have a compact sedan that compares to the ILX and while Mercedes, BMW and Cadillac have smallish sedans, none of them are true compact sedans and all of them are significantly more expensive – presumably because they are all bigger than the ILX. Really, if you want an actual compact luxury sedan, the Acura is the best fit of that description and when you want to cap your spending at $35,000, there is no competition in the US.

Pricing
Now, before getting into listing all of the things that the Acura ILX does that no other car sold in the US can, let’s look at the pricing of the compact luxury sedan. In base form, the ILX starts at just $27,900 while the top of the line ILX with the Technology Plus and A-Spec package starts at just $34,890. Click here for a closer look at the loaded ILX. The only other smaller front wheel drive luxury sedan sold in the US right now is the Mercedes Benz CLA, which offers comparable power and luxury in a slightly bigger package starting at $31,500. The BMW 320i and Cadillac ATS sedan both come with standard rear wheel drive, with the Bimmer starting at $33,150 and the Caddy starting at $34,210. If you add just what is required to get leather in any of those three luxury sedans, the price immediately jumps higher than the top of the line package for the ILX with all of the bells and buzzers.

In other words, the Acura ILX is a big smaller than the next least expensive luxury sedans in the US, but when you look at the long list of features that you can get while still having an MSRP below that of the closest competitors with leather seats, it is unquestionably the best bargain in the entire luxury segment.

Compact Size and FWD
If you talk to a representative from most of the luxury automakers operating in America, they will be quick to defend the segment’s hard shift towards rear wheel drive cars. They will talk about driving dynamics and how the average luxury sedan buyer wants the feel of the rear drive configuration. Many of the average luxury sedan buyers also want a big, powerful engine and a huge car – but for the people who don’t fit into the “average luxury sedan” box, we have cars like the Lexus CT200h, the new Mercedes Benz CLA250 and the Acura ILX. As for the smaller form of the Acura ILX compared to the other luxury automakers’ smallest and least expensive option, not every luxury car buyer lives in a 100 acre complex with a 20 car garage. Many people in the market for a luxury car work in city centers where traffic is tight, parking is tighter and a big sedan is more of a headache than a luxury. For those people, a smaller luxury car that still includes all of the luxury amenities – but in a much smaller footprint – is far more appealing than a slightly larger sedan that doesn’t offer this city-dweller any real advantages.

Power, Efficiency and Dynamics
The Acura ILX comes with a standard 2.4L 4-cylinder engine with 201 horsepower and 180lb-ft of torque. That engine is channeled to the front wheels via an 8-speed automatic transmission that beautifully combines power and performance, leading to official fuel economy expectations of 25mpg in the city, 36mpg on the highway and 29mpg combined – numbers which I found to be 100% realistic in real world driving without any ridiculous fuel economy tricks. The Mercedes Benz CLA250 packs 208 horsepower and still offers 26mpg around town, 38 on the highway and 30 combined, giving the Benz an advantage in power and fuel economy, but again, a CLA250 with leather has a price starting above the loaded ILX.

Also, in addition to packing comparable power and solid fuel economy, the Acura ILX offers strong driving dynamics for a front wheel drive car. Some people will slight the ILX by calling it Acura’s Honda Civic, but chassis similarities aside, the ILX is a far better car on the road. The suspension setup offers a nice mix of comfort and performance, handling well while still providing a comfortable ride on Detroit’s rough highways. Of course, the fact that it is smaller than the competitors makes it much easier to navigate tight city streets and parking structures, so while the ILX might not pack the high performance driving experience of the competition, it is more enjoyable to drive and more comfortable than the long list of popular non-luxury compact sedans sold in the US.

Interior Gadgets
My Acura ILX test car with fitted with the premium Technology Plus and A-SPEC Package, meaning that it was equipped with pretty much every gadget that the company has in their arsenal. This includes heated leather wrapped front seats, a premium infotainment system with a touchscreen controls, navigation, Bluetooth connectivity, voice controls and a high mounted nav screen, dual zone climate control and a sunroof. This isn’t the most elaborate system in the luxury segment, but it is the most elaborate system in a compact sedan in America while also being the most intricate system for a car that tops out under $35,000. The Acura ILX brings in all of the luxury items that you get from the larger, more expensive luxury sedans from Japan, but they are all nestled into a compact sedan - giving someone who wants a true compact sedan their first chance to get a luxury car that doesn’t cut any corners while still keeping the purchase price lower than any option in the segment. This is the least expensive luxury sedan sold in the USA, but it is not the cheapest, as it includes all of the amenities that you could want for this low price range. Finally, the leather wrapped bucket seats up front have plush padding and deep bolsters, giving the ILX comparable comforts to the larger sedans while also offering plenty of front seating space for the driver and passenger. The back seat is a touch tighter, but the Acura team did a great job of freeing up rear leg room for rear riders, so while the rear seats obviously don’t have the rear space of the larger sedans, there is enough space for an ILX owner to drive somewhere with four adults seated comfortably in the car.

The Final Word
The Acura ILX is a great option for someone who is shopping for a compact front wheel drive sedan and it is the only option on the market in which you can get leather for under $35k (under$36k with destination included). In fact, everything mentioned above is standard on the top of the line ILX, so for the price of the closest competitor’s base model with leather seats, the ILX brings you all of the comforts and technology of the Acura brand. Now that Mercedes Benz has rolled out their front wheel drive CLA250 and the BMW 1 Series sedan could arrive sooner or later, the ILX could see more competition in the near future, but right now, no luxury car in America offers as much for such a small price in such a compact package. Remarkably, as automakers strive to attract new buyers to their luxury brands, Acura is the only company who offers a car starting under $30k or with the small stature of a compact sedan that so many consumers know and love –putting the new ILX in a league of its own.

Parks McCants wrote on September 16, 2015 - 6:05pm Permalink
Well done Patrick. Not an easy car to compare . As you stated: Acura ILX is a one-off design when it comes to the compact performance segment. While I personally found the seat and suspension to be on the stiff side, I couldn't say enough good things about the car when it comes to aggressive track-like performance and road handling. And, after a week behind the wheel, I couldn't put the key fob down. This thing absolutely grows on you! Thank you Acura.