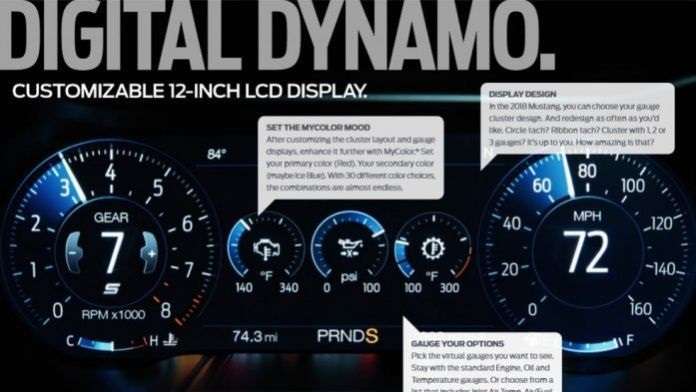 A 772-Horsepower Ford Shelby GT500 Mustang would be Incredible

Many people around the auto industry believe that Ford has hinted to the horsepower rating of the 2019 Shelby GT500 in brochure for the 2018 Mustang and if they are right, a new supercharged pony car with 772 horsepower is going to be a real showstopper.
Advertisement

When Ford Motor Company first teased the new Shelby GT500 Mustang earlier this month, the video promised at least 700 horsepower. We don’t know how far over 700 horsepower, but I previously speculated that the new GT500 will definitely pack more power than the Dodge Challenger SRT Hellcat with somewhere in the area of 725 horsepower.

However, with an official Ford image of the 2018 Mustang digital speedometer in 7th gear at 72 miles per hour, many people believe that the Motor Company has quietly hidden the GT500 horsepower rating right in front of our eyes. You might think that sounds crazy, but the company has done it before.

Ford’s Easter Egg of Horsepower
When Ford Motor Company first offered up some images of the 2018 Ford Mustang, they included a shot of the new digital speedometer. Ford communication boss Mike Levine shared that image on Twitter, asking everyone if they found the Easter eggs in the image. That image showed the car in 4th gear at 55 miles per hour, which we later learned was the projected horsepower rating of the 2018 Mustang GT. The final product offers 460 horsepower, but that 455 was a hint.

A Monster Mustang
Provided that the internet is right and the 2019 Ford Shelby GT500 Mustang packs 772 horsepower, they might also be right that the odometer reading of 743 miles is actually a hint to 743lb-ft of torque. With 772 horsepower and 743lb-ft of torque, this GT500 would be the most powerful Mustang ever while being the second most-powerful American car of all time – trailing only the 840 horsepower Dodge Demon.

Most importantly, with 772 horsepower, the new Mustang GT500 would have a gigantic power advantage over the Chevrolet Camaro ZL1 1LE. It is expected that the new Shelby will still be built to battle the best road courses, so it will directly take on the Camaro, not the Dodge Challenger, so with 772 horsepower – this Mustang would offer a massive power advantage over the 650 horsepower Camaro. It would also have an advantage over the new Corvette ZR1 and even though the Mustang won’t compete with the 755hp Corvette, packing more power than Chevy’s greatest supercar would make for great bragging rights.

Of course, there is a chance that these hopes of 772 horsepower are unfounded, so the new GT500 might have less horsepower, but with anything more than 707 horsepower, the new Shelby Mustang will overpower almost any stock car sold in America.