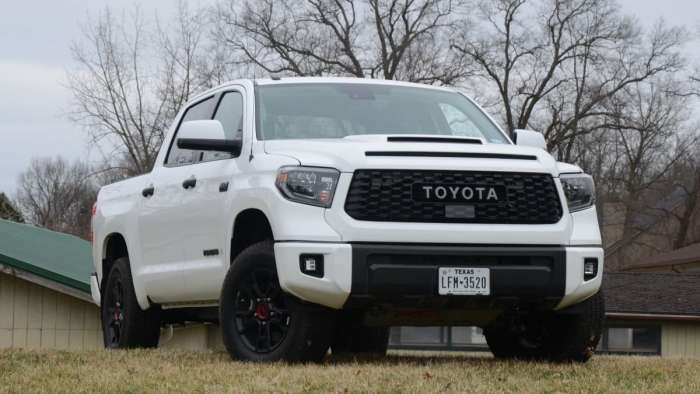 5 Things to Love about the 2019 Toyota Tundra TRD Pro

I recently spent a week driving the 2019 Toyota Tundra TRD Pro and found that for anyone who likes big performance-themed pickup trucks, there are 5 clear reasons to love this package – which I consider to be the very best full-sized truck every offered by any Japanese automaker.
Advertisement

Ford, Ram, Chevrolet and GMC have dominated the half-ton truck market in the United States literally forever, but over the past decade, the Toyota Tundra has slowly developed into a solid competitor for the American pickups. While the earlier Toyota half-tons weren’t quite as tough, as rugged or as sporty as the competitors from Ram, GM and Ford, with the Tundra of the past compromising those normal truck attributes in the name of comfort. To be frank, the older Tundras were just too smooth to provide the feel that real truck buyers want.

Mind you, I am not talking about the people who buy half-ton trucks that never tow, never haul and never drive on unpaved roads. I am talking about truck people who haul and tow with some regularity, and while they may not go offroading, they drive in situations that require more capability than you get from many Japanese pickups. I am talking about truck lovers and large truck enthusiasts who want their truck to ride and drive like a proper truck – not like a mid-sized SUV that can also tow and haul. 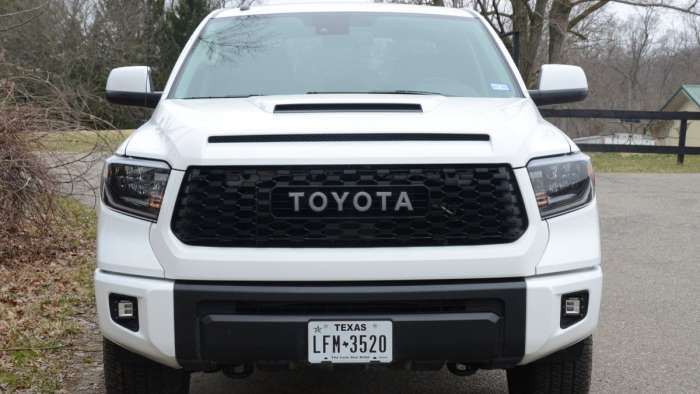 Fortunately, Toyota introduced the TRD Pro package for the Tundra and for the first time, a Japanese automaker had a half-ton truck that could truly compete with the American trucks in the enthusiast world. Inside, outside, on the road and in the dirt, the Tundra TRD Pro looks and feels like the trucks that have proven to be the most popular from the American brands, and it is still my favorite half-ton truck from a Japanese automaker.

Here are five reasons why I love the Toyota Tundra TRD Pro, all of which are sure to please the most demanding – albeit non-brand loyal – half-ton truck enthusiasts.

The iForce V8
First up, Toyota’s iForce V8 is not specific to the TRD Pro package, but it plays a role in the overall quality of the package. With 381 horsepower and 401 lb-ft of torque, this is one of the most powerful gasoline engines and it makes the Tundra nice and quick in normal driving situations. Whether you are launching hard from a stop or blasting along a rough dirt country road, the 5.7-liter V8 is strong and responsive, making this half-ton a whole lot of fun to drive. 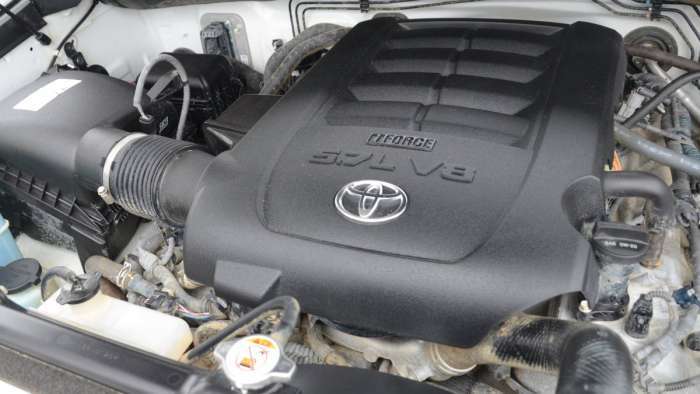 More importantly for some drivers, in addition to making the TRD Pro quick and fast for a truck of this size, it also packs great power for hauling and towing. With 600 pounds of horse grain in the bed, the driving dynamics of the TRD Pro aren’t impacted at all and with a 5,000 pound horse trailer hooked up, this Tundra pulls as well as any V8 half-ton on the market.

When it comes to power, the Tundra has always been in close competition, but the TRD Pro engine has a unique feature that other models do not, and that brings me to my next key point.

TRD Dual Exhaust
The 2019 Toyota Tundra TRD Pro comes with the TRD dual exhaust system that might be my favorite aspect of the package. This exhaust system makes an impact from startup, presenting a sweet roar-to-life and a healthy grumble at idle. When you hit the road, the exhaust has a mellow rumble under normal driving circumstances, but when you hammer down, this system offers a wide-open tone that is a great deal like an aftermarket system. There is no annoying drone and when you back off of the throttle, this system isn’t as loud as many aftermarket pipe setups, but in terms of idling and a hard pull, the TRD exhaust system is fantastic. This system sounds good enough that when driving the TRD Pro, I find myself putting it into neutral to rev the engine – it sounds that good, rumbling and roaring as nicely as any factory-offered American truck. 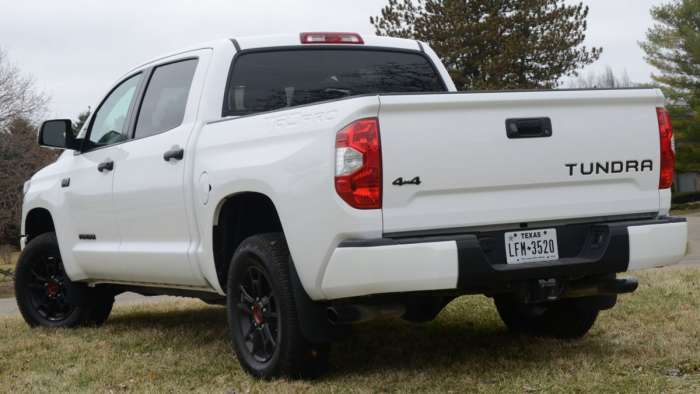 Rugged, Sporty Appearance
In addition to sounding great, the TRD dual exhaust on the Tundra TRD Pro has a cool look, with dark exhaust tips poking out from behind each of the rear wheels. Those exhaust tips are just a small part of the aesthetic aspect of this package, but the look of this truck plays a key part in how much I enjoyed it.

The dual exhaust tips are probably the most minimal aesthetic change, as the TRD Pro package adds a bold grille that is unique to the package, big TRD Pro logos stamped into the bedsides and the 18-inch BBS wheels, painted black and wrapped in all-terrain tires. This package also includes black badges, black bezels for the LED fog lights, black headlight bezels and black grille filler in each of the openings across the front end, including the hood scoop. 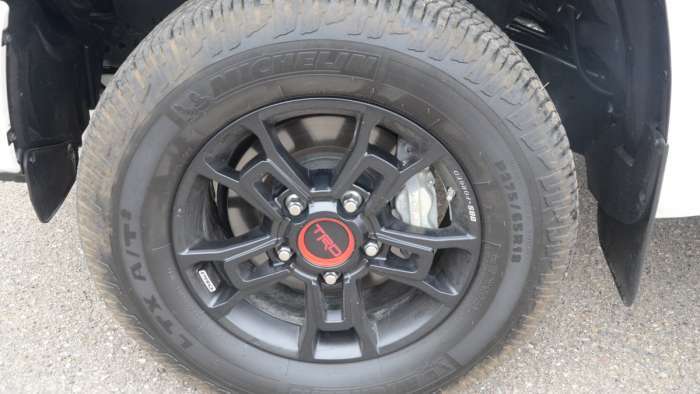 While white wouldn’t be my first choice for an exterior color, I love the black contrasting trim, which goes a long way in creating a sporty look from every angle. As a special note the TRD Pro comes with a bed-mounted GoPro stand that I didn’t use because I broke my GoPro shortly before getting this test truck, but it is another cool feature that allows owners to film all of their off-road fun. This is a feature that every automaker should offer in some form. 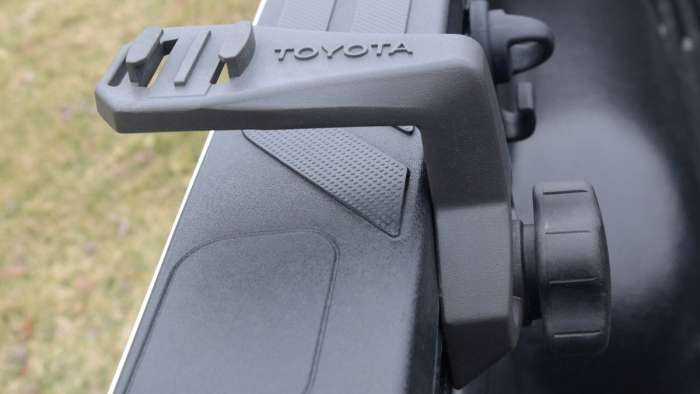 Fox Shocks
One of the reasons that I like the Tundra TRD Pro so much is the ride on-road and off, and that comes thanks to the specially tuned Fox shocks. This suspension setup creates an on-road ride that is stiffer than the non-TRD models and some people might not like that. If you find that the TRD Pro is too stiff for your tastes, then you shouldn’t be looking at off-road-themed trucks, but if you can appreciate a truck that is stiff without being too stiff, this Toyota is a great option.

It provides a smooth ride on the road as half-ton trucks go, although slightly rougher than other Tundras, but where it really shines brightest is on my local unpaved roads. This is an area where other Toyota models can struggle, with deep ruts and holes causing the truck to bounce around in an unpleasant manner. With the Fox Shocks, that bounce is gone, so the TRD Pro can scoot down those rough roads smoothly and well within control, handling the roughest roads in my area as well as any truck that I have tested. 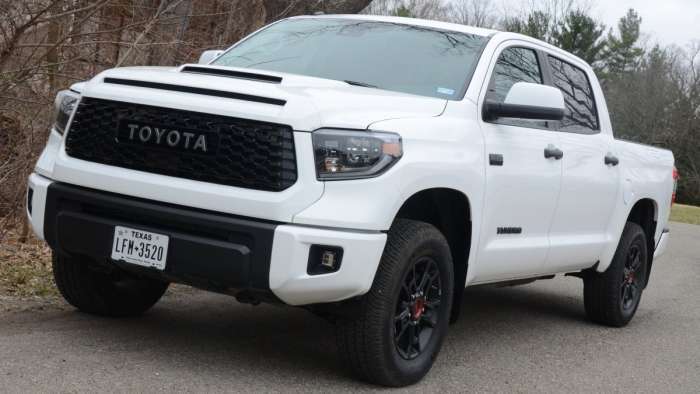 This suspension setup is good enough that I found myself taking these rough roads rather than paved roads, as the Fox Shocks make these muddy trails a ton of fun in the TRD Pro.

Best of all, those Fox Shocks also stiffen up the suspension when pulling a trailer, removing the “wake” effect that I have experienced with past Toyota Tundras. On certain roads while pulling my 5,000 pound horse trailer, the back end can get to bobbing with the inconsistencies in the road surface, but with the TRD Pro dampers, that bobbing is gone. Basically, the TRD Pro handles my test trailer better on paved roads and in the dirt than any Toyota truck I have tested, so not only is this package more fun, but it is also the better choice for pulling my horse trailer.

Roomy, Loaded Interior
Finally, the Toyota Tundra TRD Pro comes with leather-wrapped seats with embroidered logos on the seatbacks, 10-way power control on the driver’s seat and 4-way power control on the passenger’s front seat. These seats are very wide, making for a very comfortable ride for drivers and passengers of all shapes and sizes around town and on long road trips. These seats look great and feel great, but the Tundra cabin has lots of other upsides. 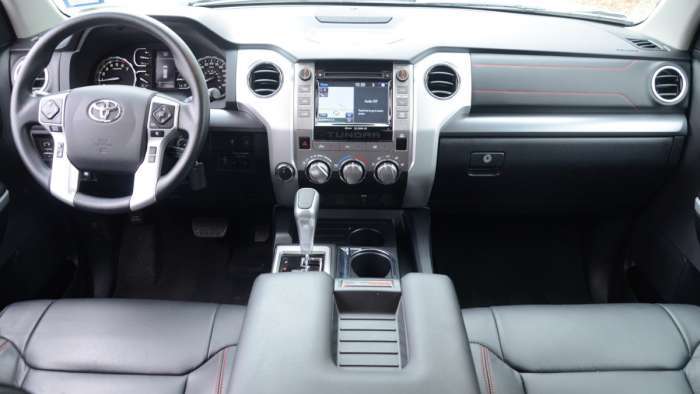 There is more leather on the dash, door panels and center console, which works with the touchscreen infotainment system to create a very upscale look and feel. The gadgetry of the cabin in the TRD Pro isn’t going to blow you away, but with navigation, the ease of touchscreen controls and a solid sound system, this package doesn’t leave you wanting for anything. 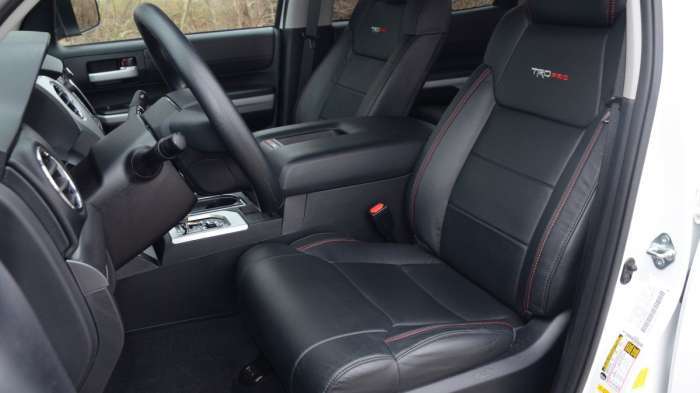 Also, in addition to the seats being very comfortable and the cabin having a high end look and feel, there is gobs of space in the Toyota CrewMax cab. The space around the front seats doesn’t come as much of a surprise, but the rear seating area is huge, offering tons of leg room for even very tall adults. This is a truck that can truly, comfortably carry four tall adults, maybe five if they are friendly with each other. 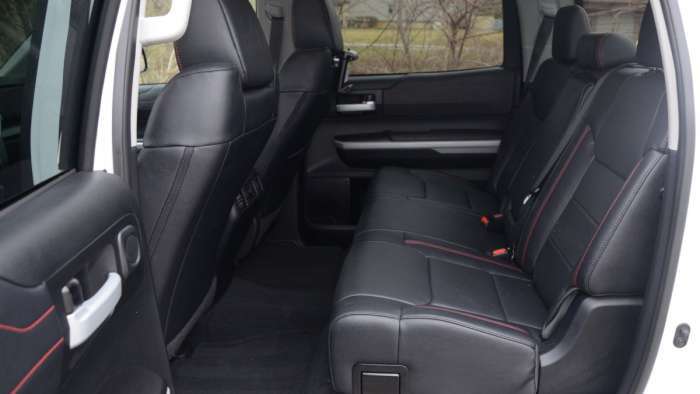 If you are considering a new Toyota Tundra and you want a combination of off-road performance, on-road comfort, excellent working abilities (towing and hauling), a plush cabin and a sporty exterior, the TRD Pro is the truck for you. I have said it before and I will say it again – the TRD Pro is the best half ton truck ever offered by a Japanese automaker and it would be my first choice over all of Toyota’s other trucks.