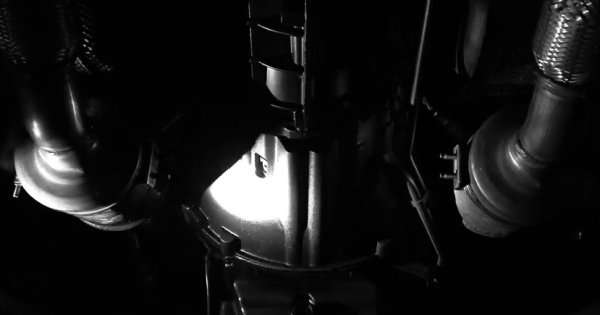 Ford Motor Company has rolled out its third tease video of what I still believe pertains to the 2016 Mustang Shelby GT350, with this newest video offering a quick glimpse of the engine bay and the undercarriage – both of which further confirm that these shadowy shots do indeed show a new Mustang with a V8 engine.
Advertisement

The third teaser video for the unknown Ford performance car has hit the internet and based on what we can see in the latest video, it is even more likely to be the 2016 Mustang Shelby GT350. Also, in addition to talk about the inspiration behind this new performance car, the discussion of forced induction and turbocharging comes up. That somewhat supports the idea that these videos pertain to another vehicle – possibly the Focus RS or the new Ford GT-like supercar – but some of the briefly displayed images confirm to me that this is indeed a high performance Mustang.

Teaser #3 Shows Engine Bay and Exhaust
There are a great many interesting aspects of this 3rd video teasing the 2016 Ford Mustang Shelby GT350, but to me, the most important portion of this video comes just 7 seconds in. The first image that we see appears to be a plastic intake manifold similar to what is used on the current 5.0L V8 in the Mustang GT. The second image shows what looks to be the front of an engine with a system of hoses that I believe also belongs to a V8.

The next key portion of the video comes around 15 seconds in, when the camera shows a light panning across the underbody of this new Mustang. I have included a screen shot of this clip at the top of the page, and it shows what I believe is clearly the catalytic convertors and dual exhaust of a V8 engine, with the transmission also visible. Above all, this shot confirms that the mystery car is a V8, so while this could still be some new supercar, it almost definitely isn’t the Focus RS.

Around 24 seconds into the video, we see a driveshaft, which confirms that this mystery car is not a mid-engine vehicle like the Ford GT. Around 44 seconds, we see the hood latch area with a panel just above it that clearly reads “Carbon Fiber C” – and I would guess that the C leads into the word composite. Finally, around the 54 second point in the video, we see a quick, shadowy image of an engine bay and the two most visible features are the coolant overflow tank and the filler neck for the windshield washer fluid. Both of these items are in the same place here that they are in the 2015 Mustang GT.

When you put all of these key features mentioned above in one car, I believe more strongly now than ever that this is a Mustang – most likely the next generation Shelby Mustang.

Other Features of This Mystery Performance Car
In addition to those features which I mentioned above that pretty much confirm that this car is a new Ford Mustang, we get to see a few other key components of this high performance monster including Recaro race seats and some monster Brembo brakes with drilled rotors behind thin spoke wheels.

Turbocharging Discussed - But Why?
The one aspect of this video that doesn’t really make sense is Ford’s Jim Farley talking about adding turbocharging, the EcoBoost engines and other forced induction across their lineup. That throws a wrench into the discussion, as it is widely believed that the 2016 Shelby GT350 Mustang will be powered by a high revving, flat plane V8 measuring 5.2 liters. If these videos do tease the 2016 Shelby Mustang and that car is powered by a naturally aspired 5.2L V8, then why is Farley talking about forced induction?

One reader has commented that this mystery performance car could be the next generation Ford Mustang Cobra Jet race car, which very well could feature a twin turbocharged 5.0L V8 – but if Ford really going to put this much effort into teasing a low production, race-only model? I don’t think so.

somebody wrote on November 11, 2014 - 10:41pm Permalink
Its sure that its a new Mustang GT 350,they probably mentioned ecoboost for 2 reasons, 1.the 1.0 turbo i3 which is generally not balanced,but Ford balanced it naa,so they might have found a way to balance the 5.2 FPV v8 2.this engine could have some new ports or injectors from ecoboost engine which can handle high injection rates as well as direct injection tivct
Robert Davies wrote on November 12, 2014 - 7:47pm Permalink
I think your all wrong. It is the Shelby GT 500 for 2015. Even the ford gt 500 link brings us to the ford mustang page. I think it will use extensive carbon fiber and the picture with the fog light is surrounded in carbon fiber. I think the brake cooling ducts will be integrated to the left of the fog light and the front ducts behind the front wheels will cool the rear brakes. I think this will be a lightened version with twin turbo making about 715 HP. I cant wait.....
Tony wrote on November 13, 2014 - 4:43pm Permalink
Episode 4--now what do you think? Mustang but much different than stock GT or Supercar?