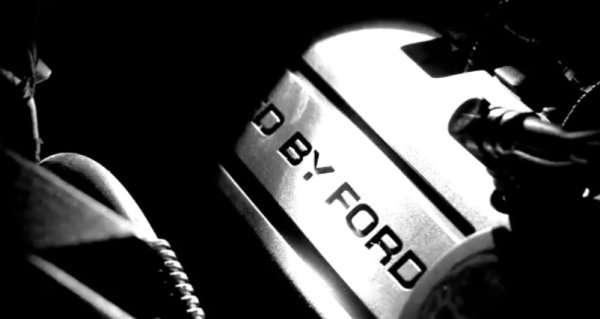 Ford has offered up a video that talks about high performance in a way that leads me to believe that this is the first official teaser for the 2016 Ford Mustang Shelby GT350, including a reference to the date of November 17th, 2014 – leading me to believe that the next generation Super-Stang will make its world debut in a few weeks.
Advertisement

So the video below showed up today on the official Ford YouTube channel, showing quick glimpses of what I believe could be the 2016 Ford Mustang Shelby GT350. In the video, Ford’s top brass all talk about the heritage of Ford Racing and how it helped to improve Ford’s performance oriented road cars. The video is almost certainly teasing a new performance car and while it could be lots of things including the Focus ST or the next generation SVT F150 – be it Raptor or Lightning – I believe that we are getting our first official look at the new Shelby version of the 2015 Mustang.

Throughout this video, we see short interview segments with Ford’s top brass including Jim Farley, Joe Hinrichs, Mark Fields and Raj Nair along with quick shots of a car that I suspect is the 2016 Shelby GT350 Mustang. Starting early in the video, we see close up images of what appears to be a suede wrapped steering wheel, bright silver pedals, a grille insert, a wheel, a street tire, exhaust tips, a roof ditch molding and the valve cover shown above – with the video ending with the same image which starts the video. This final image is again accompanied by the 1/5 in the top right and the date 11-17-14.

Comments are disabled for this video and the only text in the details reads “Ford has a legendary performance heritage that spans almost every racing series around the world. Lessons learned on the race track help influence Ford’s lineup of performance vehicles for consumers.”

It is all pretty vague, but I still believe that this is the first teaser for the 2016 Mustang Shelby GT350 – or whatever the next generation Super-Stang is called.

Could This Mean Anything Else?
The problem with this video is that there is really no guarantee that it pertains to the 2016 Ford Mustang Shelby GT350. While we do see some clips of Mustangs racing, we also see a ton of clips showing smaller vehicles racing offroad. There have long been rumors that the European Focus RS would arrive in the US, and that model would eventually be featured in some of the forms of racing shown in the video below. Some of those images that we see, including the steering wheel, the exhaust tip, the pedals, the grille insert, the wheel design, the tire tread pattern and the roof ditch molding could all work on a Focus RS.

What I don’t think works for a Focus RS is the valve cover, which is very similar to what has been used on previously Ford Mustang models. That one shot of the Powered By Ford valve cover is what leads me to believe that this car packs a V8 and I believe that this V8 has to belong to the 2016 Shelby GT350.

Watch the video below showing what I believe is our first look at the 2016 Ford Mustang Shelby GT350 and tell us in the comments below what you think is under the cover at the beginning and end of the video. Also, expect any more videos in the next 14 days on this new mystery car to be available right here on TorqueNews.com.