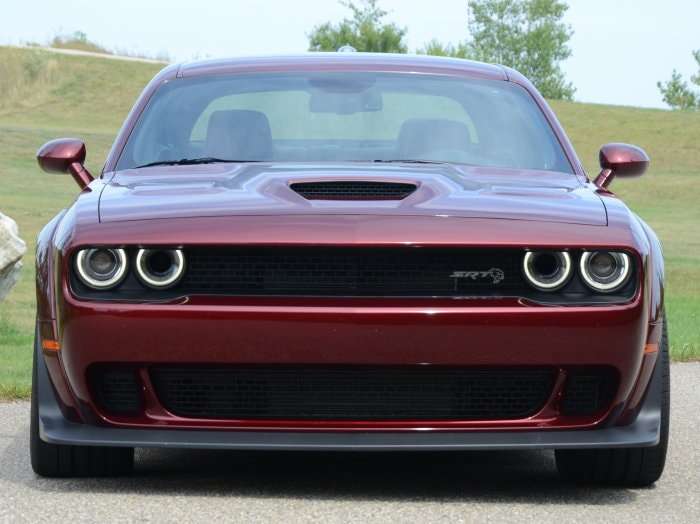 The modern Dodge Challenger was introduced for the 2008 model year, so with the arrival of the 2018 models, the modern Mopar muscle car is officially more than a decade old yet sales numbers continue to climb from year to year and today, we look at how FCA has kept this 11-year old car selling so well.
Advertisement

In the modern era of performance cars, it is important to keep the lineup fresh and that is why we see so many changes from the likes of the Ford Mustang, the Chevrolet Camaro and the Chevrolet Corvette. The current Mustang was introduced for the 2015 model year and it was refreshed for 2018. The current Camaro was introduced for 2016 and there is a refreshed expected to arrive for 2019 and after the C7 Corvette was introduced for the 2014 model year, it is rumored that an entirely new generation with a mid-engine design will arrive within the next year or so.

On the other hand, the modern Dodge Challenger hit the market back in 2007 as a 2008 model year vehicle and since then, the car has only had one mid-cycle refresh. While there have been changes made to every major area of the car – including the exterior, the interior and the drivetrain – the 2018 Challenger is based on the same basic architecture as the 2008 models. That means that with the 2018 models, the current Challenger turns 11 years old and although the 2015 refresh was significant, Ford and Chevy fans are quick to point out that the big Dodge is very old by modern industry standards.

They are right – the Dodge Challenger is pretty old as performance cars go, yet the aging chassis keeps on setting records and it keeps on posting better sales numbers from month to month and year to year. In fact, the 11-year old Challenger is comfortably outselling the 3-year old Camaro through the first quarter of 2018 and it doesn’t seem likely that this trend will change as the year goes on…but how it is that the Dodge Challenger at more than a decade old is able to continue posting improved sales numbers while the other two, newer cars see sales declining?

Today, I take a look at the three reasons why the Dodge Challenger just keeps on selling better, even when the rest of the segment slumps.

All of this Hemi power improves sales in a couple different ways. Obviously, Dodge enthusiasts are drawn to their local dealership to buy the latest and most powerful Mopar muscle car, but more importantly, the big power of the Hemi engines draws in those buyers who aren’t loyal to a specific brand. There are plenty of performance car buyers who upgrade every few years and when they do, their key concern is big power and performance. For several years, no Camaro or Mustang came close to challenging the Hellcat Challenger and to this point, no car in the world challenges the new Demon when it comes to raw power and that draws in all sorts of prospective buyers.

Tons of Trim Levels
The 2018 Dodge Challenger is available in 16 different trim levels, all of which are hard tops. The 2018 Chevrolet Camaro has 11 (6 coupes, 5 convertible) and the 2018 Ford Mustang has 10 (6 coupes, 4 convertibles), so for a car that only has a hard top, 16 seems like a ton of options. However, the high number of optional trim levels is one of the reasons why the Challenger just keeps on selling better.

Each 2018 Dodge Challenger trim level is different enough from the next that it offers some unique appeal. Of course the 840 horsepower Demon and the 707 horsepower Hellcat models stand out with their big power, but models like the T/A 392 has unique features from the lower-priced R/T Scat Pack, even though those two models share a drivetrain and other key functional bits.

In offering so many different configurations of the Challenger, Dodge has something for every buyer – whether they are focusing on performance or a tight budget. You like the handling and interior of the Hellcat, but you don’t need that power? Here is the SRT 392. You like the 392 power, but don’t want to pay for the premium interior and adaptive suspension? Here is the R/T Scat Pack. You want slightly better performance than the Scat Pack and you want more of an SRT-inspired look? Here is the T/A 392. You just want a V8 for as little money as possible? Here is the Challenger R/T. You want a more muscular appearance with the R/T power? Here is the basic T/A.

Oh, and if you want the look at not all of the Hemi power, there is a V6 and if you live in a snowy area where you want to drive your Challenger year-round? Meet the all-wheel-drive Challenger GT.

I could go on and on, but the bottom line is that 16 trim levels allow the Challenger to meet the desires and demands of pretty much every possible buyer.

The 2015 Refresh
Finally, the biggest jump for Dodge Challenger sales came with the introduction of the refreshed 2015 models. The Challenger had remained largely unchanged from 2008 through 2014, but for the 2015 models, the front end, rear end and interior all got a major refresh. Sure, the 2015 Challenger introduced some key models like the Scat Pack and the Hellcat, but even with the strong sales of those new models, the rest of the Challenger lineup saw sales boom after the refresh.

The 2015 refresh didn’t just introduce more power – it also introduced more high tech features inside and out. Most notably, the gorgeous 8.4-inch UConnect infotainment system coupled with the adjustable driver information cluster made the 2015 models leaps and bounds more modern-looking on the inside, while LED taillights and projection headlights on just about every model improved the look of the outside of the Mopar muscle car.

Basically, shy of reducing the curb weight, the 2015 Dodge Challenger refresh addressed every issue with the earlier models. The car was more modern, but it preserved the retro lines that made the modern Challenger so popular. The interior was nicer and more comfortable, but again, it is still has the distinct muscle car feel. Tie in the new look inside and out with new trim levels and gobs of power, and there is little question as to why the 2015 Challenger led to such an impressive sales spike.

The Ford Mustang also saw a big sales spike with the arrivals of the then-new 2015 models, but that faded away over time while the Challenger numbers have continued to grow. Meanwhile, the arrival of the 6th generation Camaro did not lead to a sales spike, as numbers have steadily declined since the 2016 car was introduced.

The bottom line here is that without a new generation or really, any huge changes, the Dodge Challenger has continued to improve its place in the market with new technology, plenty of options and more power than you can get from either of the key competitors.