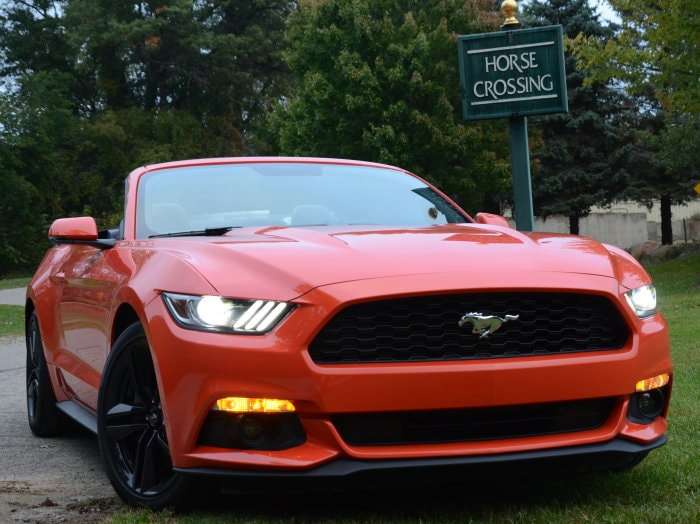 The next generation Ford Mustang is expected to arrive in the spring of 2020 for the 2021 model year on a new chassis platform and when it does, it could be the second American muscle car to offer all-wheel-drive – potentially looking to cut in on the market share of the all-wheel-drive Dodge Challenger.
Advertisement

More than two years ago, the folks at Mustang6g.com reported that the 7th generation Ford Mustang – codenamed the S650 - would begin rolling off of the assembly line sometime around May of 2020 for the 2021 model year. More recently, Ford Authority has reported that the 2021 Mustang will be built on the same CD6 chassis platform as the upcoming Ford Explorer. Using a shared platform for the Mustang will allow Ford to make more money on their popular pony cars, but more importantly, this shift to this new platform could lead to an all-wheel-drive option.

S650 Mustang Platform
It has long been expected that a new Ford Mustang would arrive for the 2021 model year and if the new insider reports prove to be true, the next generation pony car will be built on the same CD6 chassis architecture as the upcoming Ford Explorer and Lincoln Aviator. This platform is expected to be far more flexible in terms of function, so it could be used to carry the big SUVs as well as the sleek sports car.

Sharing a platform allows Ford to spread research and development costs over multiple models and that increases profitability across all of the models that share that architecture. More importantly, using the same chassis for multiple models will allow the company to use more shared items throughout the vehicle. This means that we might see a V8-powered Explorer, but more importantly for this piece – it could mean the first factory-built all-wheel-drive Ford Mustang.

The AWD Mustang
If you live in an area that gets much snowfall, you likely don’t see many Ford Mustangs on the road once Mother Nature focuses her icy gaze on your part of the world. Five years ago, you likely wouldn’t see any muscle cars on the road in heavy snow, but that all changed last year when Dodge introduced the 2017 Challenger GT. That V6-only package has proven to be popular in many areas with heavy snowfall and in Metro Detroit, I see many GT models on the road during the winter.

While in the grand scheme of things, the all-wheel-drive Dodge Challenger doesn’t sell all that well, that AWD muscle car showed that there is most certainly a market for a muscle car that focuses more on year-round functionality and less on big power. Dodge took the leap and put the first AWD muscle car out there and people bought it, so now it would make sense for the Motor Company to look to cut in on that market segment.

With the 2021 Ford Mustang being built on the same underpinnings at the Explorer, it seems very possible that the company could offer an all-wheel-drive model, similar to the Challenger GT. This Mustang would likely be a 4-cylinder model with a loaded-up interior, designed to compete with the likes of the Challenger GT and the pricier Audi A5.

Also, while an all-wheel-drive, V8-powered Mustang sounds nice, it seems unlikely that the company would go that route. The added weight of the all-wheel-drive system would have a substantial impact on performance, even with the added traction. Also, many muscle car buyers who are specifically after high performance models are seeking the rear-drive feel while those buyers who want a year-round car will be happy to have the power of the turbocharged 4-cylinder.

Of course, this is speculation based on a variety of insider source reports, but if the 2021 Mustang is on the same chassis as the Explorer, an all-wheel-drive pony car is a very real possibility.

vbondjr wrote on June 25, 2018 - 11:42pm Permalink
This would be a fantastic idea, IF, Ford would do this the right way. This 2.3L AWD mustang ecoboost would need to have all of the bells and whistles of the Ford Focus RS except for it needs to have the 2.3L Ecoboost pumped up to 390hp and 390lb-ft of torque through the 10-speed automatic. It also needs to be able to have the system capable of putting 85% of the power to the rear wheels in performance mode while being smart enough to handle winter. If those power numbers look familiar, they are the same specs the Terminator Cobra had back in 03-04. Also when the CD6/S650 platform drops, the new mustang needs to have 485hp as the standard number, no questions asked and the torque needs to be a lot higher, at least 450tq. The same goes for the Explorer, yes a 400hp/400tq explorer ST is nice but lets stop BSing around and put the 5.0L Coyote Gen-3 or Gen-4 or whatever in the Explorer and give the masses what they want. We also want less Ecoboost engines in the F-series pickup trucks. We actually just want regular V8 engines without all the extra turbos and crap! Now I'm pretty sure if Ford can take a 5.2L V8 and crank it to 526hp with the special crankshaft, I'm more than sure Ford can take that same 5.2 with a regular crank shaft, naturally aspirated and make at least 500hp, Take that and put that in the Raptor with the 10-speed behind it and have yourself a darn good time. You could even take the 5.0L, tune it to 450hp and 430lb-ft of torque, drop that in a street variant F150 and bring back the Lightning and just like that you have vehicles that people actually want again. Yeah sure a few good pedestrian vehicles would work, along with a few tesla killers (news flash, we hate tesla! but we all know that electrification is coming and honestly it's probably a good thing. even still we are all hoping that Ford & GM will cut Tesla off at the knees and then kick them in the nuts! just saying) But yeah, this is what America wants. We want rear wheel drive based vehicles, we are tired of euro trash wannabes and jap-crap impersonators. We want cars like the Aussie Ford Falcon!! better mustangs, V8 street performance SUVs and trucks. That's what we really want guys! To be honest, we want GM to do the same thing. We want our cars back. We're tired of the other stuff. We need our stuff. Please and Thank you!!
Gee wrote on July 12, 2018 - 4:34am Permalink
Dodge was not the first muscle car awd, 1965 Ford mustang awd look it up!!