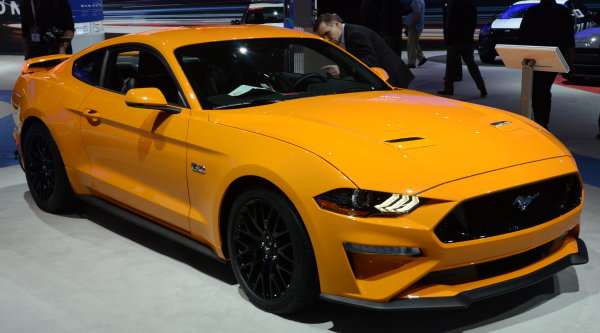 While the Motor Company hasn’t offered any official word as to when the refreshed 2018 Ford Mustang will go on sale, information posted on the automotive fleet management website Donlen suggests that the 2018 models could be available for order in July, and the first units could arrive in October.
Advertisement

Before discussing this ordering and production information for the 2018 Ford Mustang, I want to point out that this is not based on official Ford Motor Company information. The automaker has not announced any actual dates as to when the refreshed pony car will go on sale or reach dealerships, but based on this information from the automotive fleet company Donlen, the 2018 models could go on sale in July while production should begin in early October – leading to a likely delivery date in late October for the first units.

This fleet website information, which was (not surprisingly) discovered by a member of Mustang6g.com, points out that “All dates are estimated and subject to change”, but based on their early information, we can expect the order banks to open in July and production to begin in October.

The 2018 Ford Mustang Cometh
According to Donlen.com, the initial ordering date for the 2018 Ford Mustang is expected to be July 17th, 2017. Production scheduling is set to start on August 17th, 2017 and production of the refreshed 2018 Mustang is expected to begin on October 2nd, 2017. It seems possible that the ordering window dates or scheduling dates could change, but it seems unlikely that the production of the 2018 Mustang will change and it almost definitely will not be any later than early October, as a Q4 delivery is already a bit on the late side.

There will likely be an extended quality control process for the new models, but if production does begin on October 2nd, we should see 2018 Ford Mustangs reaching dealerships by the beginning of November or so. That is likely a bummer for those prospective 2018 Mustang buyers who live in colder areas which receive snowfall, as their new sports car isn’t likely to arrive until the temperatures have dropped below freezing, but the arrival of the 2018 Mustang for November should allow the Motor Company to enjoy a jump in sales late in the year, which will likely carryover into the beginning of 2018.

As we have previously reported, the 2018 Ford Mustang will have the refreshed exterior shown above, more powerful 4-cylinder and V8 engines and the new 10-speed automatic transmission. The improved performance and revised appearance is almost guaranteed to draw in new buyers, so there will likely be people waiting to order themselves the new and improved 2018 Ford Mustang.

The community at Mustang6g.com has also located a list of standard features and option packages, which you can read about by clicking here.