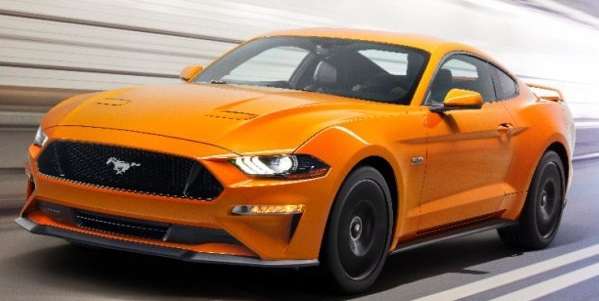 Shortly after we brought you the video showing the 2018 Ford Mustang GT yesterday morning, the Motor Company rolled out their first official statement on the new pony car and while the exterior refresh is the big story right now, the drivetrain information is just as important – with the turbo 4 and V8 getting more power and new transmissions while the V6 is gone altogether.
Advertisement

On Monday night, a video hit the internet showing what was reported to be the official Ford Motor Company b-roll video for the refreshed 2018 Ford Mustang GT. Since that video had spread to every corner of the internet by Tuesday morning, it came as little surprise that Ford Motor Company issued a press release with images and information on the 2018 Mustang, but as has been the case with most new FoMoCo vehicles over the past few years – the first details are extremely brief.

As expected, this press release officially announces the exterior refresh of the 2018 Ford Mustang and over the next few days, we will be taking more about the physical changes made to the newest iteration of America’s bestselling sporty car. Today, we are focusing on the drivetrain features, as Ford has made some alterations to the functional bits of the 2018 Mustang which would make it a better performance car in every way.

No More V6
First off, the 3.7L V6 which has served as the base model engine for the Ford Mustang since the mid-90s (in some form – it has not been the same V6) has been removed from the lineup. Having driven the 2015+ Mustang with both the V6 and the turbocharged 4-cylinder, I can say without question that the turbo 4 is the better engine in every way. It makes more horsepower, more torque and gets better fuel economy, so aside from the basic cost – there was no reason to order a new Mustang with the V6 engine.

The key “problem” with this move is that the removal of the V6 engine from the 2018 Ford Mustang lineup might drive the base MSRP up a touch. For 2017 model year Mustang, the EcoBoost coupe costs about a grand more than the V6 coupe, so getting into the least expensive Mustang in 2018 might cost a bit more than it does for 2017 – but that price increase comes with more power and better fuel economy.

In short, the end of the V6 base model Mustang is a good thing, and the new 2018 “base model” Mustang with the turbocharged EcoBoost 4-cylinder should be the best performing entry level Mustang of all time.

Beefed Up EcoBoost and V8
Next, in addition to killing off the 3.7L V6, the press release introducing the 2018 Ford Mustang announced that the 2.3L EcoBoost 4-cylinder and the 5.0L V8 would both be enhanced for the new model year. No numbers were offered, but Ford has promised that the EcoBoost will pack more torque while the 5.0L V8 from the Mustang GT will have more horsepower and torque.

New Transmissions
Finally, Ford Motor Company will use two revamped manual transmissions for the 2018 Mustang, with the Mustang GT 6-speed manual featuring a new twin-disc clutch and dual-mass flywheel combination. More importantly, both the EcoBoost and the V8 Mustang for 2018 is available with the brand new 10-speed automatic transmission, which will offer quicker shifts, smoother shifts, better performance and better fuel economy than the 6-speed automatic in use in the 2017 Mustang.

So, while we don’t know how much power the 2018 Ford Mustang will have, we know that the V6 is gone, the EcoBoost 4-cylinder will have more torque, the 5.0L v8 will have more horsepower and torque and all new models are available with a 10-speed transmission.
Stay tuned to TorqueNews for all of your 2018 Ford Mustang information as we continue to sort through the information and rumors on the refreshed muscle car.